A truly fringe and controversial subject within the field of ufology is that of alien-human hybrids. There are certain factions of the field who feel that, for whatever reasons, that alien entities are experimenting to mix human and alien DNA to create strange new beings. It all sounds like something out of a science fiction novel, but there is much discussion on just this going on, no matter how absurd it might sound. Mostly this is all regulated to the far fringes of the UFO field, but on occasion it comes blasting to the forefront, and this is certainly the case with an Oxford professor who claims that aliens are interbreeding with us to help save us from the end of the world.

It’s rare that you see the very fringe, outlandish idea of aliens hybridizing with humans taken seriously in the slightest bit by an academic, but that is oddly exactly what happened recently with an Oxford University professor by the name of Dr. Young-Hae Chi, a teacher of Korean at Oxford’s Oriental Institute. Since at least 2012 he has been lecturing on the idea that aliens are not only already here amongst us, where they remain invisible to our eyes, but that there are more than one species of the extraterrestrials and they are interbreeding with us and mixing amongst us.

According to Dr. Chi, there are four main types of aliens here on Earth living among us as we speak, which he describes as “Small; tall and bold; aliens with scales and snake eyes; and finally, insect-like.” It is these insectoid aliens that he believes are the bosses, and outrank all other types. They are also the ones behind the supposed hybrid programs, wherein human and alien DNA are mixed in top secret experiments. He has also said that abducted humans are routinely forced to engage in “sexually oriented actions with aliens or even other human abductees under the influence of mind control.” And why would they do this, you ask? Well, according to him it is due to several reasons, but chief among them is because they are trying to find a way to help us survive through the catastrophic escalation of global warming in recent years. He has written of this in his book Alien Visitations and the End of Humanity:

One possibility is that they find our DNA valuable for the preservation of the stock. Secondly, to create species which can survive in the future climate conditions. Thirdly, some abductees report that these hybrids are of a very high intelligence, so are they producing these hybrids as a problem-solver, a future leader? It may be more or less assumed that the hybrid project is a response to the impending demise of human civilization. Not only scientists and theologians, but also non-human species who appear to be greatly concerned about the survivability of the human species. So, they come not for the sake of us, but for the sake of them, their survival, but their survival is actually our survival as well — the survival of the entire biosphere. Judging from the way the ETs are acting, they have a better view of our future, perhaps it is pointing to a pessimistic future.

He says that these aliens are all around us, but that we cannot see them for reasons he remains fairly vague about. He says that they are basically invisible to us most of the time, only choosing to show themselves to those they abduct, and has claimed:

If they are far, they shouldn’t be concerned about us.  I don’t think they are from far away, they are just next to us, we can’t see them. We can use an analogy of fish which can think and perceive things only in the way they can and humans also perceive only in the way we can, so our perception of the world is limited by our organs. 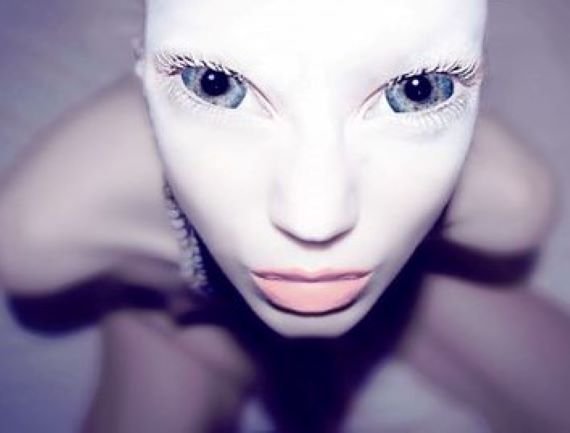 As far as the hybrids are concerned, Dr. Chi has quite a bit of lore to offer on them, describing how they look more human-like with subsequent generations, saying “The first-generation hybrids still have physical features distinctive to aliens. But from the second generation … they have almost indistinguishable bodily features from those of humans, although they may still carry at least one fourth of alien genes.” Much of his hypothesis is additionally based on thousands of interviews he says he has conducted with alien abductees over the years. He even claims that the increase in UFO sightings and abductee reports in recent years directly correlates with the increase in greenhouse gases in our atmosphere, as this has sped up the need for them to create a “new model of Homo sapiens.” Of course he is aware of the skepticism these claims bring, and he has said of this:

As you might expect, most scientists are dubious. After all, there’s never been any good evidence that the abductions are taking place. No one seems to bring along a cell phone to make photos, or pocket an artifact from the saucers.

Dr. Chi has nevertheless held tight to his bonkers theory that aliens are implementing a breeding program to save us from the rigors of global climate change, and you can watch one of his far-out lectures on the matter here. Is there anything to this, or is this just the delusional rantings and sci-fi imaginings of an out-of-touch individual? Whatever you may think, Dr. Chi continues to stand by his hypothesis and writes and speaks on it extensively. Is any of this worth looking into at all? In the end it remains a curious piece of strangeness to add to the pile of the already truly bizarre area of alien-human hybrids, and it is a wild ride whether real or not.

The Aswang: Maybe the Most Terrifying Monster of All