"I want readers to walk away from this book with an understanding of the insidious way disinformation consumes all common sense in its path, and to perhaps ponder a profound question: Is Bigfoot in fact the elusive leader of all conspiracies?"

In a press release announcing the book, Denver Riggleman describes why he wrote “Bigfoot… It's Complicated" as a way to address issues far bigger than Bigfoot. 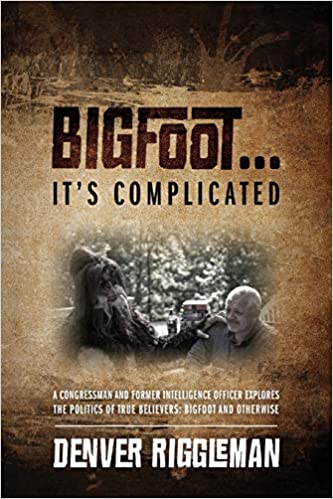 "We're at a crucial moment for our country, there's no doubt. Misinformation is running rampant in the highest halls of power, and the American people will ultimately pay the price if we allow this insanity to continue unchecked. If we want to save our democracy, we'll need to fight speech with speech, and counter those who don't deal in truth or fact."

With views like this, it’s no wonder some members of Riggleman’s Republican Party wonder if he is truly one of them. He does too, especially when members of his party support QAnon. It’s why he told the Virginia Mercury that may run for governor as an independent.

“It’s absolutely ludicrous that there’s anyone who would believe that Democrats have a cabal of Satan-worshiping pedophiles that are funding a deep state coup against the present administration. That’s incredibly ignorant.”

Riggleman’s recent congressional work and statements, together with his previous career as an intelligence officer, obviously show his concern about conspiracy theories. Have they caused him to forget about Bigfoot? Hardly. He says he “pranked” his wife on their 15th anniversary with a Bigfoot excursion and released the new book on their 31st. He explains why believing in Bigfoot is “complicated."

“Is Bigfoot possible, no. Is he probable? Maybe. I think that’s the self deprecating part of this as an intelligence analyst trying to figure out why people believe what they do about Bigfoot and how that affects their lives, and I think that’s why people will like it."

Bigfoot’s not possible? That’s not going to get him many votes from Bigfoot supporters. He’s hoping the book will turn them around.

“Hilarious and thought-provoking, this book will challenge what you think you know about reality, politics and those that mix conspiracy theories with mythological beings.”

Give Denver RIggleman credit – he keeps popping up in interesting places … just like Bigfoot.

The Mysterious Cult of a Castle in New Jersey