Lady Gaga and her Ghostly Stalker

Hauntings and ghostly encounters have happened to people from all walks of life and of all ages. There seems to be no one above the occasional paranormal experience, and such tales are extremely widespread. Yet what really captures the imagination and gets people listening is when these things happen to a well-known person, and this is surely the case with the ghostly adventures of the pop star called Lady Gaga.

There is perhaps no more famous a pop singer in the world of music than Lady Gaga. The mega-famous songstress was born in New York as Stefani Joanne Angelina Germanotta, and from a young age seemed destined to be a musician. By the age of 4 she had already taught herself to play piano, and by high school she was already writing songs. At the age of 19 she managed to land a record deal with Def Jam Records, and although this didn’t pan out, she soldiered on, making a name for herself as a songwriter for other musical acts, and a collaboration with the musician Akon would lead to her getting a lucrative deal with producer RedOne, after which her career skyrocketed, fueled by hit after hit, such as Boys Boys Boys, Just Dance, Poker Face, Telephone, and Bad Romance. Her amazing vocal chops, combined with her extravagant and sometimes controversial live performances and bizarre and flamboyant fashions have propelled her into the stratosphere, making her a major, beloved star all over the world.

Along the way, Lady Gaga has drawn around herself a reputation as being a bit eccentric to say the least. She famously wore a dress fashioned of meat to the 2010 MTV Music Video Awards, and she is well-known for spending insane amounts of money on some pretty strange things, such as hiring a NASA scientist to help her design a steaming dress for around $50K and she apparently bough an actual castle in Britain, although she is equally known for her philanthropy, donating massive amounts of money to various causes and release efforts. Yet her eccentricities and weirdness is what she is most known for, and this is one of the reasons why her fans love her. One particular eccentricity that has not been quite as well-publicized as some others is that she not only believes in ghosts, but is terrified of them and even thinks she has been stalked by one.

It all began during her Monster Ball World Tour from 2009–2011, during she says that a spirit she calls “Ryan” attached itself to her and apparently followed her around everywhere she went. The ghost would apparently follow her all over the world and cause all manner of trouble and mischief for the star, to the point that she had séances and exorcisms to try and get rid of Ryan, to apparently little effect. One of her touring crew would say of her obsession and fear of this ghost:

She's been telling us all for months that she has a male spirit called Ryan who travels the world with her. She's pretty terrified by this spirit, but more than anything he's annoying her as he won't leave her alone. He's hasn't been doing anything too violent or scary but she's freaked out by his presence. She's a very spiritual person and in tune with the spiritual world but this is a step too far, even for her. She contacted a spirit medium and organized a séance so she could communicate with him and tell him to go away. She gathered all her friends over the weekend in Belfast, Ireland, and held the séance to find out what he wants. She's convinced she picked this up as a bad omen. Although most of her friends were skeptical they agreed to take part. She believes in paranormal activity and won't take any risks when she is on the road. It's important to her to be safe from spirits. 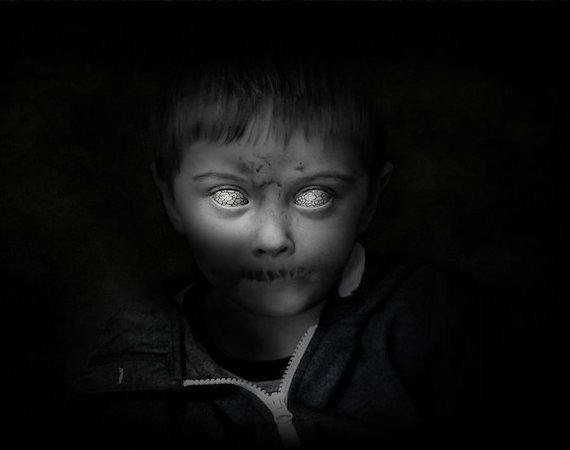 Lady Gaga has never been very clear on just who Ryan is supposed to be or why he has chosen to haunt her, but she has apparently become so scared of him that she hired at great expense her own personal team of paranormal investigators, real life Ghostbusters, to check out every room she stayed at on the tour to make sure Ryan wasn’t around. To help them along, she allegedly spent an estimated $50K on state-of-the-art “Electro Magnetic Field meters” used for detecting ghosts, as well as the money needed to transfer the heavy equipment from place to place all over the world. In addition to her strong belief in the spirit world, she also has made other strange paranormal claims, such as that she believes herself to be a reincarnation of her dead aunt. She has said of this:

My father's sister Joanne died when she was 19 and he was 16. And when my mother was engaged to marry my father, they were staying in his house, where he grew up, and a light came into the room and touched her stomach and went away. She believes that Joanne came into the room and sort of OK'd her for my dad and that Joanne transferred her spirit into my mom. So, when I was born, it's almost as if I was her unfinished business. She was a poet and a real renaissance woman, pure of heart – just a beautiful person. She died a virgin. And one of my guides told me he can feel I have two hearts in my chest, and I believe that about myself. I believe you can be reborn over and over again. I believe I was my father's sister. My father's sister died when she was 19 years old and I believe her spirit is with me and so I believe that I am her reincarnation.

It is unclear just how real any of this is, but Lady Gaga certainly seems to believe it all, and it adds another layer to her overall mystique. What happened to the ghost Ryan? Where did he come from in the first place? Did any of Lady Gaga's fancy ghost detecting equipment actually work? Who knows? It all goes to show that celebrities are just as susceptible to being pulled within the strange world of the paranormal as any of us, and it is a wild story at the very least.