Majestic 12: When a Wave of “Secret UFO Documents” Surfaced in the 1990s

Continuing on my theme on the Majestic 12 documents, the mysterious "Falcon," Stan Friedman, espionage and the FBI, and alleged leaked papers on crashed UFOs and dead aliens, today I thought I would share with you what specifically came after all of that. I'm talking about another Falcon-type character who claimed knowledge of the truth of Roswell, alien autopsies and more. In this case, the time-frame was not the 1970s-1980s, but the early 1990s. And the man who revealed the then-new Majestic 12 documents was a resident of Big Bear Lake, California: Timothy Cooper. Although no longer active in the UFO research community, Cooper provoked a wealth of controversy for saucer-seekers when it was announced what he had in his possession. It was all "thanks" to an enormous body of allegedly leaked and highly secret documentation that had been given to Cooper under circumstances worthy of All the President’s Men. Cooper was certainly no Woodward or Bernstein, but you get the point I’m making: Cooper said he had insider sources who were willing to significantly assist his UFO research by feeding him controversial papers on aliens and extraterrestrial spacecraft. Clandestine mail-drops in the dead of night were very much the order of the day. The primary informants were an elderly man named "Thomas Cantwheel" and a woman named "Salina." The latter was said to have been Cantwheel’s daughter. Both of them, Cooper was told, had worked in the field of U.S. counterintelligence for decades. They were the careful keepers of untold numbers of sinister UFO-connected secrets, some supposedly connected to the 1962 death of uber-babe, Marilyn Monroe, and to the November 22, 1963 assassination of President John F. Kennedy, in Dealey Plaza, Dallas, Texas. If you believe their words, that is.

It’s important to note that if you do a Google search on "Cantwheel" you will find only links that deal with UFOs, Tim Cooper, and Majestic 12. The reason for this is very simple: "Cantwheel" is not a real name and never has been. Yet, that’s the name Cooper’s source consistently signed off on his communications to Cooper. The closest real name is "Cantwell." Even now, I'm still amazed as to why hardly anyone, back in the 1990s in the UFO research community, pointed out that "Cantwell" was a completely manufactured name. Over a period of time that ran close to a decade, Cooper’s informants provided him with what ultimately amounted to thousands of pages of saucer-themed material and additional data. They were focused on everything from Majestic 12 to alien autopsies, and from accounts of crashed UFOs to attempts by the U.S. military to replicate extraterrestrial technology. 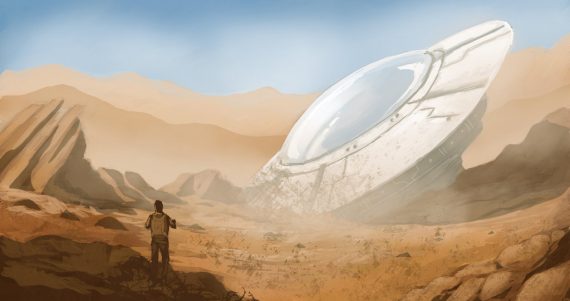 One of the documents even alluded to the possibility that the May 22, 1949 death of James Forrestal – the first U.S. Secretary of Defense – was not the suicide that many assumed it was. Rather, the Cooper papers suggest, Forrestal had to be taken out of circulation to ensure that he didn’t go public on what he knew about flying saucers. What really set the Cooper-era Majestic 12 documentation apart from that which caught the attention of the Moore-Shandera-Friedman team in the 1980s, however, were the references to deadly viruses. Indeed, in several of the papers provided to Cooper there were references to plans to try and back-engineer an alien virus. This was way more controversial than the original Majestic 12 documents that reached Jaime Shandera and Bill Moore. Tim Cooper quit the UFO scene more than a few years ago. He has not returned. And no more leaked documents have surfaced. Who, precisely, Cantwheel and Salina were - and what their true agenda was in the matter of aliens (dead or alive) - remains a mystery. As does just about everything - from the 1970s to the 1990s - that relates to the matter of alleged leaked documents of a UFO-themed nature.