Due to climate change melting the Swiss Alpine glaciers, a treasure trove of ancient artifacts has been revealed, dating as far back as 9,500 years ago during the Mesolithic era. The ice had preserved the artifacts over time which included a knotted string of plant fibers from 6,000 years ago, leather trousers and laced shoes from about 2800 BC, and a 2,000-year-old wooden doll, which were just a few of the hundreds of items found.

Just last month, Marcel Cornelissen led an excavation trip to a crystal site close to the Brunifirm glacier in the eastern Swiss canton of Uri at an altitude of around 2,800 meters (almost 9,200 feet). That’s when the team came across the 6,000-year-old knotted string of bast fibers which was found at Schnidejoch pass in the Alps.

The fact that they found so many items in the Alps is actually very interesting because it had been previously believed that ancient humans did not climb mountains. “We know now that people were hiking up to the mountains to up to 3,000 meters altitude, looking for crystals and other primary materials,” stated Christian auf der Maur who is an archaeologist with Uri canton. They may have also traveled up to the mountains in order to get to valleys or perhaps to hunt. 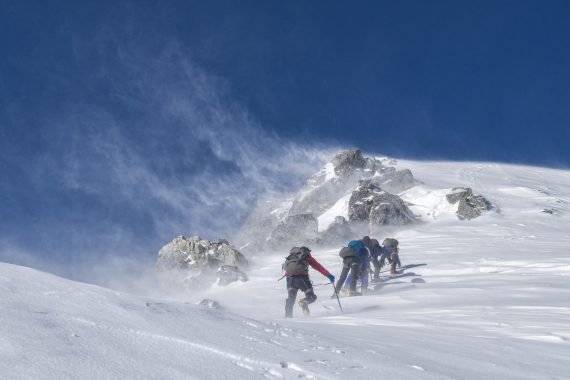 Even though the discovery of the items is very exciting, it was due to the ice that they remained preserved for thousands of years so now that climate change has caused the ice to melt, that means that experts are racing to save these artifacts. “It is a very short window in time. In 20 years, these finds will be gone and these ice patches will be gone,” archaeologist Regula Gubler explained to AFP.

She went on to say that erosion causes materials such as wood, birch bark, leather, and textiles to become destroyed and it was only because of the ice that they remained in such great condition. Climate change has caused so many glaciers to melt that revealed ancient artifacts that a new research field has been developed called glacier archaeology.

Christian auf der Maur stated it best when he describing the findings as “truly exceptional”. Pictures of some of the items can be seen here.

This is not the first time that ancient items have been recovered from the Alps as a case used for arrows dating back to the year 3000 BC was uncovered at the same location (at an altitude of 9,000 feet) back in 2003.

The most famous find from the Alps, however, was the preserved body of a 5,300-year-old warrior from the Italian Tyrol region named “Otzi” whose remains were discovered back in 1991. He was 5 feet 2 inches tall and weighed 110 pounds. He was 46 years of age when he died after getting shot in the back of his left shoulder with an arrow. He had a narrow, pointed face with brown eyes, long dark hair, and a shaggy beard. His skin was tanned and he had tattoos. Experts were also able to determine that he was lactose intolerant and had O-positive blood.