Prehistoric Massacre in Spain Changes the History of European Warfare

“Between the mid fourth and late third centuries BC, the site was subjected to a violent attack, its inhabitants killed and the settlement burned. Here the authors present osteological analyses for a massacre: decapitations, amputations and other sharp-force injuries affecting a wide cross section of the community. They interpret the massacre as an instance of conflict between rival local communities, contributing to a growing picture of the scale and nature of violence in Iron Age Europe.”

In a recent study published in the journal Antiquity, researchers led by Teresa Fernández-Crespo of Oxford University to a fresh look at remains discovered in the 1950s in La Hoya, an Iron Age town in what is now the Basque Country of northern Spain. Located in the Ebro River valley, La Hoya was a major town – the archeologists determined it had protective walls, streets and large buildings erected by the Berones, a Celtic culture. The Berones ruled the area from the 15th century BCE until about 300 BCE when they disappeared. New analysis of 13 remains gave Fernández-Crespo the definitive reason why.

“One adult male shows clear evidence of decapitation: his fourth cervical vertebra is completely bisected by an oblique cut, consistent with a single blow to the neck from left to right, at a downward angle.

“Although no clear defensive wounds have been identified, the most plausible explanation for the trauma observed is that it could have been inflicted during a face-to-face encounter in which the victim tried to confront his attacker.”

A male and a teenage female had their right arms amputated. The position of the female and her arm indicated it had been thrown away (with bracelets still on it) and she crawled to it until she died, either from blood loss or a stab in the back. Two more males had “sharp force injuries potentially inflicted from behind by bladed weapons – some swords and daggers were recovered in a nearby cemetery. (Photos here.) All of the skeletons showed signs the victims had been set on fire and were found unburied, indicating the perpetrators left them dead or dying in the streets. 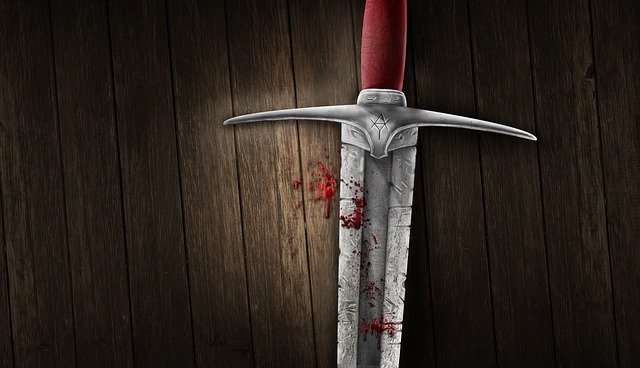 As gruesome as the violence was, the cause was the real shocker. The archeologists found no evidence of raiding, pillaging or destruction of property in this thriving Iron Age marketplace. That leaves only one other reason for the massacre:

“Given the site's location in a natural boundary area, the attack may have been a consequence of power struggles and territorial ambitions between neighbouring pre-Roman polities.”

Power and politics – of course. But the key phrase in the study is “pre-Roman.” La Hoya is the only known Iron Age Iberian site whose destruction occurred before the Roman conquest and occupation began in 218 BCE and warfare became the order of the day – Live Science reports that Roman massacres occurred in Cerro de la Cruz in 150 BCE to 130 BCE and La Almoina in 75 BCE.

It appears the massacre of La Hoya was so brutal and complete, the few survivors never came back. Who could have done this? The study concludes that pre-Roman Iberian Age societies waged political battles for power, dominance and destruction long before the rest of Europe became the war-mongering area it remains to this day. The last line of the study sums it up in terms George Orwell would enjoy … and modern humans should remember:

“Certainly, the Romans were not alone in being able to “make a desert and call it peace”.”

Make a desert and call it peace. Seen any of that lately?