Stan Friedman’s FBI File, the Majestic 12 Documents and the Russians

Just a couple of days ago, the FBI placed their file on the late UFO researcher/author/nuclear physicist Stanton Friedman onto their website, The Vault . The file runs to 61 pages. Don't get too excited, however: there isn't much at all in the material that will have ufologists foaming at the mouth. There is one interesting part of the file, though. It states that Friedman "...on February 27, 1984, contacted the Chief of Freedom of Information Privacy Acts (FOIPA) Section, Records Management Division of the FBI and requested information regarding weekly intelligence conferences with a proposed study of flying saucers. At the time Friedman made this request, he provided specific file numbers of FBI HQ files in which this information was contained. It is not known how Friedman obtained these file numbers [italics mine]." That's really the only part of the file that is of any particular interest. The rest is all of a bureaucratic nature. I did wonder - before I dug into the file - if there might have been something related to the bogus Majestic 12 documents that got so many ufologists foaming at the mouth in the late 198os. After all, Friedman's colleague Bill Moore (co-author with Charles Berlitz of the 1980 book, The Roswell Incident) had a file opened on himself by the FBI. And the FBI also opened a file on the MJ12 papers. Clearly, however, the FBI wasn't interested in Friedman's research into the MJ12 documents. So, does that mean the FBI had zero interest in those controversial, alleged 1947-period papers? No. 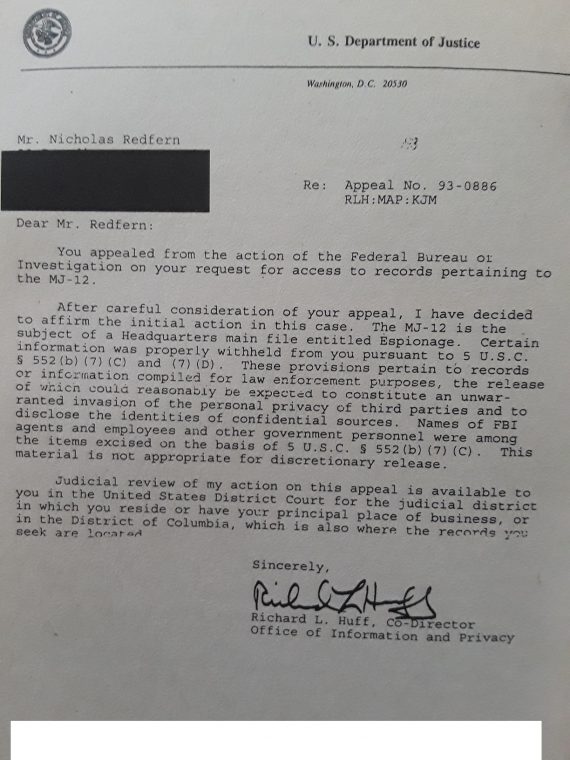 We do know something of deep interest though, thanks to the staff of the Bureau Co-Director within the Office of Information and Privacy. In correspondence (back in the 1990s), I was informed by office staff of the existence of an FBI "Main File" on Majestic 12,. It's now in what is termed "closed status." The title of the file is not something along the lines of "Potentially leaked document" or "Questionable document," as one might imagine, given the strange story. Rather, the file title is nothing less than – wait for it – “Espionage.”Almost certainly, the reason why the FBI titled their MJ12 file "Espionage" was for the following reason: at one point in 1988, the FBI pursued the admittedly intriguing theory that the MJ12 documents might have been created by Russian disinformation experts and counterintelligence agents. Now, we come to the next stage. It helps to explain what was going on behind the scenes and expands on the above.

In 1999, Gerald K. Haines – in his position as the historian of the National Reconnaissance Office - wrote a now-declassified paper titled "CIA’s Role in the Study of UFOs, 1947-90." Haines said that in the 1970s and 1980s there were "...concerns that the Soviets and the KGB were using U.S. citizens and UFO groups to obtain information on sensitive U.S. weapons development programs (such as the Stealth aircraft), the vulnerability of the U.S. air-defense network to penetration by foreign missiles mimicking UFOs, and evidence of Soviet advanced technology associated with UFO sightings [italics mine].”

Directly connected to the Soviet theory is the fact that, as U.S. Intelligence learned to its consternation during both the 1970s and the 1980s, an unclear number of unnamed UFO researchers - with important links to the U.S. defense industry - had been compromised by Soviet agents. It went like this: those saucer-seekers who just happened to work in the field of defense, and who had been caught tightly in a Kremlin web, would secretly provide the Russians with top secret data on the likes of the F-117 Nighthawk "stealth fighter" and the B-2 Spirit "stealth bomber" - which, at the time, were still highly classified and in test-stage out at the likes of none other than Area 51. In return, the KGB would provide those same American researchers with sensational documents on crashed UFOs and dead aliens. The plan that Moscow had in mind was for the Russians to get their eager hands on real, top secret, non-UFO-themed U.S. military/intelligence documents that could be used to advance Russian military aviation programs. But, those UFO investigators who worked in the defense world would receive nothing but faked garbage from their Soviet handlers, such as – you’ve got it - the Majestic 12 documents. That was the theory U.S. intelligence was concerned by. You can learn the the whole story in my 2019 book, Flying Saucers from the Kremlin.

There's no doubt there is a fascinating back-story concerning the MJ12 documents (that still has yet to be fully resolved). As the FBI's file on Stan Friedman shows, though, the Bureau seemingly had no interest in Stan and his MJ12 research, even at the height of the FBI's investigations into those inflammatory papers in late 1988.

The Space Shuttle, UFOs, and the Mysterious STS-75 Incident