Supernatural Strangeness at New Jersey’s Most Cursed and Haunted Road

Meandering through dark woods and rural backwaters of West Milford, Passaic County, New Jersey, is the notorious Clinton Road. Named after the original settlement called Clinton, it stretches through roughly 10 miles of mostly isolated, privately owned woodland with very few houses and it is known for its dark stretches through the spooky forests. Unpaved for much of its run, it is rare to pass any other cars out here, and surrounded by tangled, feral woods, it is a spooky place that seems perfect for the setting of some horror movie, and it is perhaps this ominous ambiance that has contributed to its notoriety, as this one lonely stretch of road is absolutely permeated with legends, plenty of spooky lore, and all manner of strangeness. From ghosts, to UFOs, to bizarre creatures from some nightmare, Clinton Road has it all.

One of the more prominent tales from the area is that of a place called “Cross Castle.” It was built in 1905 by a man named Richard Cross, who settled the area and constructed the stone dwelling for him and his family. This was at a time when the woods and the area were already known for being an ominous, threatening place, with stories of ghosts and witches wandering the gloom already doing the rounds. According to Weird NJ, a J. Percy Crayon once said of the place at the time:

It was never advisable to pass through the “five mile woods” after dark, for tradition tells us they were infested with bands of robbers, and counterfeiters, to say nothing of the witches that held their nightly dances and carousels at Green Island, and the ghosts that then made their appearance in such frightful forms, that it was more terrifying to the peaceful inhabitants than wild animals or even the Indians, that often passed. 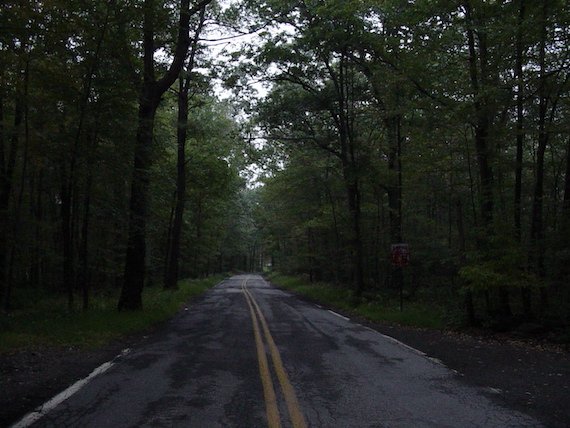 This did not deter Cross at all, and he had his castle built, but it would in later years be abandoned after Cross’s death in 1917 and fall into disrepair before burning down in a fire to leave only the stone skeleton, after that being demolished once and for all in 1988. There are only very faint vestiges remaining of the place today, but the land it sat on has supposedly long been intensely haunted. Before the place was torn down it was a popular spot for curiosity seekers, and they would often come back with all manner of tales of ghostly phenomena, much of it seemingly malevolent. People reported being pushed, shoved, and hit by unseen hands with enough force to leave bruises, and also common are sudden, very potent waking nightmares and unexplained seizures or confusion. Even today, with only the foundations of the castle remaining poking out of the brush like the remnants of some lost civilization such reports come in from this spot, and it has also gathered a reputation as being a meeting place for shadowy cults and Satanists, who leave behind evidence of their arcane rituals and indecipherable graffiti. One very eerie story was given by a witness to Weird NJ, who says:

I had a friend who lived near Clinton Road.  He used to take me on May Day and Halloween’s Eve to spy on Wiccans practicing in the areas near his house.  The proof I have is more than a kid’s flashback of witches.  It pertains to what was transcribed on the walls of Cross Castle and how a historical fact about the writing will reveal that a Satanist movement was using the area for their practices. It was a nice afternoon in 1977.  We decided to get our packs, a tent, and a rifle to spend the night up in the woods.  I took  a journal along with me.  When we came upon the castle we were amazed, as always, at how it stood out in the woods.  We entered it and were shocked to learn that someone had put up two huge boards with words spelled out in red paint.  The nature of the writing intrigued me so I copied down what the walls proclaimed, and my friend snapped a picture.

The journal stayed in a box until six months ago, when after my wife’s death, I was going through everything and read it.  What was once scribbled down in my youth was now revealed as one of the writings of Anton LeVay of The Church of Satan! I went to a local book store to match my journal with the Lex Satanicus.  I concluded that the tales about Clinton Road were  seriously understated!  The Satanists who practiced there were not a joke, but a local grotto of people using dark forces to bring forth their evil reign.  Now when I go to Clinton Road I look at everything in a different light. “ 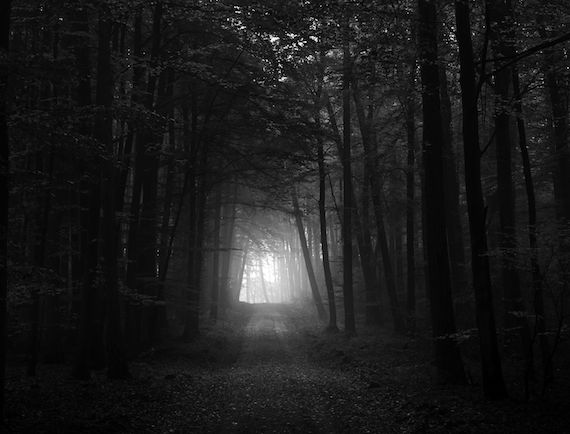 Perhaps just as famous in the area is the place called Dead Man’s Curve, in particular bridge that lies along its length. Here it is said that there lurks the ghost of a young boy, who will appear if you stop to throw coins into the water below. According to the tale, the boy will materialize to throw the coins right back at you, sometimes with enough force to crack windshields or dent cars, or alternatively leave them lying in the middle of the road. The boy will often appear as a reflection in the water, or as a full apparition walking along the road, and the legend draws in scores of people who come to throw pennies into the water in attempt to summon the ghost boy. Scarier stories involving the ghost boy say that he will try and push you into the water, although it is thought that this is a gesture to help you from being hit by the car that killed him.

The ghost boy certainly has plenty of company on Clinton Road, because there are numerous other specters said to call this place home. There are ghostly vehicles that patrol the road, such as a phantom Camaro and a black ghost truck that will speed up to cars, flash its lights, and then just vanish. Two ghostly park rangers are said to be seen along the road, especially near Terrace Pond, and there are many shadow figures seen here. One witness has said of the phantom rangers:

Much further up the road on the right there are trails that go up the mountain to a lake called Terrace Pond.  The pond was crystal clear and great for swimming.  We used to camp up there and we had a really weird occurrence that happened to us. We were camping one night around 1am and two park rangers noticed our fire and walked over to us.  They were concerned about the fire, drinking, etc.  We asked if our vehicles would be OK where they were, and asked if they would be ticketed.  They said they were fine and no ticketing would be carried out. In the morning we ventured down the mountainside and approached our cars and they had two summonses per car.  West Milford police and Newark Watershed authorities approached us and we asked them about the park rangers and they looked bewildered.

We then told them that we were speaking with two younger men and they said that we were OK to stay and camp, our vehicles were OK, and we would not be fined. One of the Newark Watershed Authorities replied, “What did these park rangers look like and what were they wearing?”  We described their appearance, and the authority told us that there were no park rangers patrolling the property anymore, and the two men we saw that night were killed on patrol in 1939. 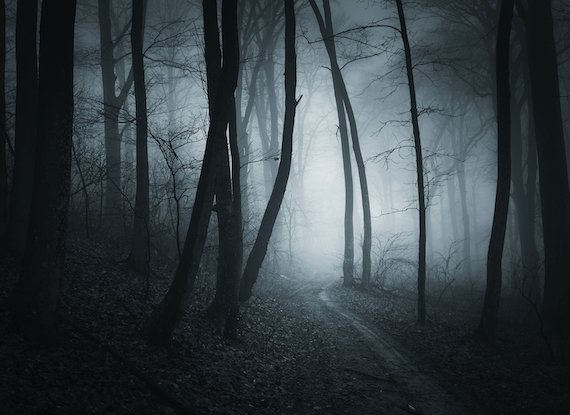 There are myriad other strange stories tied to the road. Secret KKK meetings, mafiosos dumping dead bodies, a cursed Druid temple, and many others. Adding to all of this are the various other bizarreness sighted along the road. UFOs, mysterious orbs, phantom hounds, Bigfoot, roving bands of albinos, devil monkeys, winged humanoids, and other less-definable monsters. There are also numerous reports of lost time, mysterious illnesses, and a general sense of unease here, with some people reporting that the atmosphere can be absolutely oppressive and stifling, with some people explaining it as feeling as if being suffocated by pure evil. Why is it that this one little stretch of road should draw to it so much bizarreness? Is there something about the history of the place, the land it lies on, or is it just the spooky legends we innately build up around inherently spooky places? No matter the answer, Clinton Road has gained a reputation as one of the most haunted and strangest places in the state, bringing in numerous paranormal investigators and curiosity seekers, and it will likely remain a strange feature of the landscape for some time to come.