Some of the most sensational UFO accounts are those that revolve around these strange craft coming down to earth. The Dreamy Draw Recreation Area, in the U.S. state of Arizona, is a rugged desert park next to Piestewa Peak, formerly called Squaw Peak Mountain. The area is known for its quaint beauty, hiking and horseback riding trails, and opportunities for all manner of outdoor activities. Looking out over these vistas tales of UFOs and aliens might be the furthest thing from one’s mind, but if the local lore is to be believed this was the site of a very unusual case in which a UFO came crashing down to earth, complete with alien bodies and which according to some is still there somewhere.

The story begins in 1947, in fact not all that long after the more famous alleged UFO crash at Roswell. While the story has changed into slightly different variations over the years, the main lore has it that in October of that year, two men by the names of Silas Newton and "Dr. Gee" witnessed a strange object come thundering down to earth to crash near the mountain, and the curious pair went to investigate. They supposedly arrived to find strange wreckage and the area strewn with several bodies of four-and-a-half-foot tall humanoid creatures with oversized heads, all of them dead. The men purportedly then collected these bodies and stowed them in a meat freezer until they could figure out what to do with them and who to tell. Apparently, they wouldn’t have the chance to tell anyone, as the men were soon after visited by mysterious men in black suits, who whisked the bodies away and told the witnesses in no uncertain terms that they were not to say a word to anyone about what they had seen and found.

After this, the story goes that the government moved into the area with U.S. Army personnel, and not only that, but the Army Corps of Engineers had then went about building the Dreamy Draw dam right over the remains of the fallen spacecraft. It is said that the place didn’t need a dam at all, and the only reason it was built at all was to cover up the evidence of the crash, at least according to the tale. The case is most well-known from the 1950 book Behind the Flying Saucers, by Frank Scully, but there have been numerous people since then who have stepped forward with further information on the otherworldly events. One letter sent into Legends Magazine is from an anonymous sender who has a lot to say about the site, and the letter reads:

I have more to add on the crash at dreamy draw. I've been hiking there for years and have noticed the bizarre features at the water retention site - built by the U.S. Army corps, - the dam area - which is off limits to all, has an "excessive" amount of posted signs - threatening 5yrs/$10,000 fine every 50 ft, there is also electronic monitoring of the "vault" - which is more like a concrete "bunker"- from WWII, this pillbox is located at the low point inside the "fake" retention area. Firstly, I've never seen any water there, for its location is not where watershed from squaw-peak mtn could be trapped. Why is it there? Behind a huge iron door inside the bunker, [I believe] grants entry to inside the vault to monitor / keep secure what is entombed within the dam structure itself. There is a spillway on the outside of dam – you can't get near it - but its fake, made to look functional. Most of all, I know how un-thorough the government has been with crash site clean-up, maybe they couldn't get everything - just west of secure area, there's a hill with a rocky out-cropping and underneath in the shady areas, mold is growing - abnormally diverse and thick, shouldn't even be there, I've counted 5 types/colors, its bizarre - nowhere on that mountain/trails, have I seen moss/fungus so pronounced.

Closer looking around the outcrop, I noticed the rocks in places, looked more like metal than rocks, silverish - some kind of liquid had made contact and dripped down inside the crevices, I pulled some of the rocks from the fissures and found it more abundant as it had clotted up in places. It looked organic, but nothing you could identify it with, this stuff now dried up was obviously a liquid at one time, must have been like soup, thicker than water - in the way it pooled down in the cracks of rock. The dried-goo was opaque/pearl green and I noticed it had reacted different to various rock types, the soft sandstone shale it bonded with/ dried on top, the harder quartz looked like a corrosive had made contact and pitted/dissolved areas like acid, this didn't make much sense.

I selected some of the more "choice" examples and decided to hike back to the truck with them - cradled in my right forearm. I placed them on a floor matte in the truck-bed & drove home. Driving down the freeway I started rubbed my arm-not thinking about it like a tickle/itch, after doing this for some time I said to myself - "what is it" like a insect bite or something, realizing those rocks had rested there for approx 10 min hiking back, it was like cleaning your battery posts and making contact with the acid on your elbow or something- there was a welt there and so I washed it in the kitchen sink, but then decided to shower, it vanished quickly. A few days later, "the rocks"- disappeared from the side of my house, I later found my girlfriend had put them out in the yard as landscaping decor - adding they looked cool there, and liked the "weird colors". I only go hiking on the weekends, but haven't been in a few weeks - its been hot! I been to the out cropping 4 times and every time I return, I've noticed something more to add to the story.

What is going on here and is this person for real? There have also been reports of people in the area of the dam reporting strange phenomena such as sudden spells of dizziness or inexplicable panic attacks, as well as those who claim to hear an inexplicable humming in the area. One witness calling himself Trevor Freeman has said of his own experience with this to Weird Arizona:

So I went to check this place out after school. It's Monday afternoon, hardly anybody is around. I'm pedaling around on my bike and I find the dam. It's fenced off pretty well and there are LOTS of No Trespassing signs everywhere. Pretty high security for an earthen dam with no water behind it! I take some pictures, look around, and I see the outfall of the dam buried in the bushes. I ride around to the other side and hike down into the low area. There's a large concrete box with a fence on 3 sides. As I am getting down towards the bottom, I hear this steady, low-pitched humming noise. I can't figure out what it is! Is there really a UFO buried beneath this thing? As I glance around to see if anyone's watching, a plane crosses the sky. The place is not TOO far from the airport, but it's still close enough to hear jets taking off. That's probably what I heard. The lesson is that you'll never realize how much weird stuff is out there until you start looking! 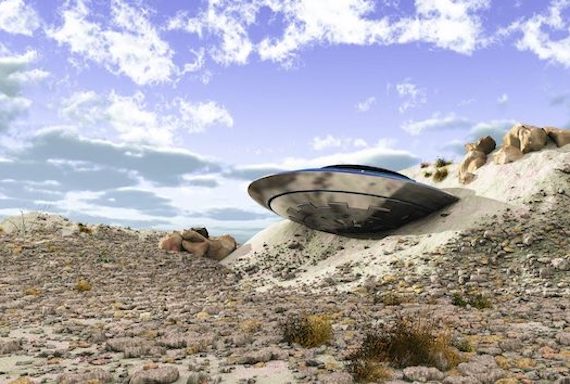 It is all very intriguing, and the idea that a UFO crashed here and was covered up by a dam really stirs the imagination, but there are definitely cracks in the tale. One is that the supposed UFO crash doesn’t seem to have ever been covered by any actual news agency at the time. Everything we know about it comes from unverifiable accounts, secondhand reports, and rumors, as well as brief mentions in Scully’s book Beyond Flying Saucers, as well as Timothy Good's 1987 book Above Top Secret, and little else. Also a rather glaring hole in the story is that it seems that the dam was actually not built until 1973, which seems to put to rest the allegations that it was made to cover up a 1947 UFO crash. UFO researcher and journalist Alejandro Rojas has dug into the case by visiting the area and poking around, and he has come away frustrated, saying:

What I sought to do is figure out what happened at Dreamy Draw... all I could find is there were rumors, there was a witness who claimed to have seen something happen either in Cave Creek or Paradise Valley or Dreamy Draw. Unfortunately, before I could speak to this witness directly he passed away.

Yet the conspiracy theories and reports remain, and there are even those who insist that the dam was not built in 1973, but rather much earlier, with the date of construction itself said to have been altered in order to aid the cover-up. The same goes for newspaper reports, with it being suggested that the same mysterious men in black who visited the original witnesses also went about silencing any news stories that might appear. It has also been pointed out that the whole Dreamy Draw Dam area is very locked up and plastered with no trespassing signs beyond what one would expect for a dam. Is there anything to this story, or is it merely a piece of UFO urban legend? We may never know for sure, and although this is most likely a tall tale, it has still managed to enter the lore of UFO crashes.