The Mysterious Petroglyphs of Valcamonica and Ancient Aliens

One of the ways the people of the past left behind a record of their existence and of their lives are the various rock paintings that can be found around the world. These are people who lived before written history, when the best way to jot down a scene of their life was to inscribe it upon the rock, and many of these relics of the forgotten past have been uncovered. Yet, sometimes there are those pieces of rock art that go beyond merely offering a glimpse at another time, and show something truly mysterious, indeed.

Situated within the rugged, mountainous area of the Lombardy region, in the Province of Brescia, Italy, is a secluded valley called Valcamonica. One of the largest valleys of the central Alps, it stretches for 56 miles through rural fields, forests, and quaint medieval villages that have changed very little over hundreds of years and seem as if something from a fairy tale, several of which have been regularly voted as being among the most beautiful villages in Italy. The area is also teeming with flora and fauna, much of it unique to this place, and has been recognized as a UNESCO World Biosphere Reserve since 2018. In addition to this, the valley is rich in history, possessing numerous old castles and Roman ruins, and it has several UNESCO World Heritage sites, but Valcamonica is perhaps best known for having the largest, most extensive, and complete collection of prehistoric rock drawings, called petroglyphs, in the world. 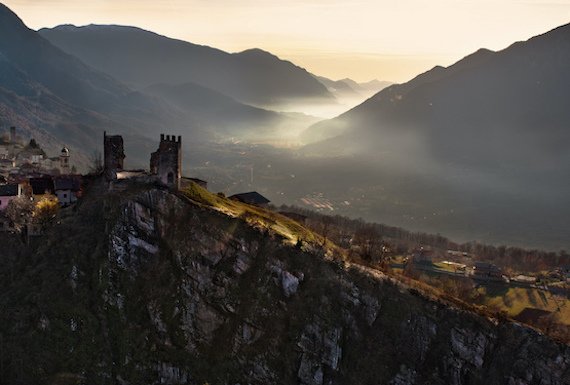 Although the rock drawings were long known to locals, who mostly ignored them and referred to them as pitoti, or “scribbles,” they gained academic attention in 1914 when they were found by the alpinist and geographer Gualtiero Laen, after which the drew in more and more interest from scientists and anthropologists around the world. There are over 140,000 formally UNESCO recognized symbols and figures carved into the rock all over the valley, but there could possibly between an estimated 200,000 and 300,000 of them in total, encompassing over 8,000 years of history, dating from at least the 6th to 8th centuries BC in the Mesolithic Age (15,000 to 5,000 BC) up through to the Medieval times (476-1453 AD). They are a unique peek into the time before written history, with many of these carvings capturing in time images depicting the daily life and spirituality of these ancient humans, including animals, plants, and humans engaged in various scenes of everyday life, hunting, magic, religion, war, and navigation, all of them in exceptionally good condition and virtually undamaged by the years and elements, thus making them and the history they depict invaluable to the fields of prehistory, sociology and ethnology.

The expansive carvings have drawn in much curiosity and fascination since their presence became widely known. Notably they were used as Nazi propaganda during World War II, when Germans Franz Altheim and Erika Trautmann began associating the petroglyphs with Nazi ideologies, quickly spreading the idea that they depicted a mysterious ancestral Aryan race and providing their “proof” of their superiority. The carvings were also used for Italian fascist propaganda, and it wasn’t until after the war and in the 1950s that proper scientific research would start on them again. In 1979, the petroglyphs of Valcamonica were recognized as a UNESCO World Heritage Site, becoming Italy’s first such designated site, and the carvings have instilled wonder and speculation right up into the modern day. Yet with such a mysterious place stuck in time, it is perhaps no surprise that there have also been many unsolved mysteries associated with it.

It has not gone unnoticed that there among all of the images of humans, animals, plants, and various geometric shapes are those that stand out as rather different from the rest and not a little out of place. In particular, there are a few petroglyphs that show figures that are drawn in such a way as to make their heads seem too small in proportion to the rest of their bodies, and making it odder is that they seem to be wearing what can only be described as some sort of protective spacesuit. These suited figures also have atop their heads what look very much like helmets that an astronaut would wear, complete with lines radiating outward as if to convey shining light. To make it all even more bizarre, the figures are depicted holding what look like some sort of mysterious tools or weapons like nothing seen in any of the other drawings, and in fact at no other place in the history of these carvings is anything else like it seen. The impression one gets is that these are figures in astronaut suits wielding advanced tools or weapons, but of course there is the conundrum that they are thousands of years old, long before any sort of outfit or electric lighting would be available. 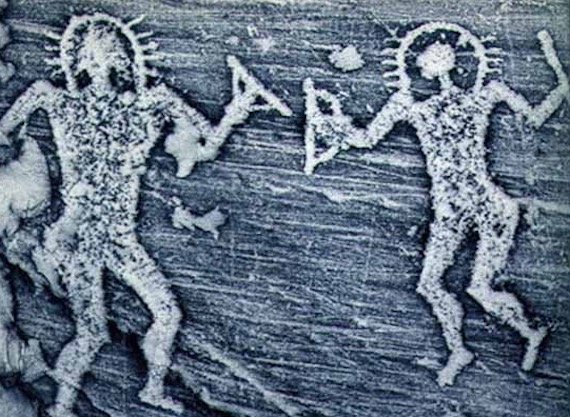 So what do we make of this? Why would this one set of carving hold such anomalous looking figures so long ago? Considering their strange appearance and out-of-place nature, it is perhaps no surprise that the strange petroglyphs have been proposed as being evidence that ancient aliens one visited the area and were then depicted by the awestruck ancient people living here. However, others have proposed that the petroglyphs are merely stylistic artistic representations of some religious idea or even a battle between two men wearing some sort of armor. The images are so old and the people who etched them into that rock are long gone, so it is impossible to say for sure, but the images are certainly odd when compared to the other more mundane figures and scenes portrayed at Valcamonica. What are these images and what do they represent? Are they merely the whims of some long-ago artist, a mundane scene that has simply been misrepresented, or something more? There have been many such mysterious petroglyphs discovered around the world, and whatever the answer is, the ones at Valcamonica remain intriguing at the very least.