Located out in the rural countryside near Avebury, in the English county of Wiltshire, is an enigmatic ancient man-made mound that juts up out of the earth and is called Silbury Hill. Measuring 131 feet high, 548 feet in diameter, composed of 324,000 cubic yards of earth and covering 5 acres, the prehistoric grass-covered artificial chalk mound is among the largest of its kind, and is more like a hulking chalk pyramid more than just a mound. The origins and purpose of Silbury Hill have been lost to the mists of time, debated and discussed to this day, and it is a place steeped in legends of arcane Druid rituals, magical powers, and lost treasure buried within its bowels. It truly adds to the mystery of this area, which includes the stone circle at Avebury and the famous Stonehenge not far away, yet some of the more modern legends have it being a hotspot for UFO phenomena, crop circles, and the location of a very strange alien encounter indeed.

The site has over the years attracted its fair share of odd tales. Silbury Hill is said to lie upon a “ley line” which is a supposed sort of vein of energy coursing through the earth, and crop circles have frequently been found in the surrounding countryside. Considering this, it is perhaps no surprise that the area has its fair share of UFO sightings as well, and indeed Silbury Hill has long been known as a hotspot, with some of the most intense activity in not only the country, but in all of Europe. On some occasions, these UFO encounters can be pretty wild, and one of these happened as recently as 2009.

In July of that year, an unnamed off duty Wiltshire police sergeant was driving along the A4 expressway right by Silbury Hill when he noticed in the early morning light a crop circle that had not been there earlier. However, even stranger than this was the fact that as he drew closer he could notice that there were three figures standing around the circle, as if inspecting it, very tall and apparently dressed in some sort of white coveralls, and the officer could see that they had long, blonde hair, although their faces were concealed by hoods. There was nothing at this point that was particularly odd about the scene other than the crop circle, and the policeman at first assumed that the men were forensic officers. He tried to just continue on his drive but things were about to get very weird, indeed.

As he passed even closer, he claims that he could hear a buzzing drone like static electricity, and this made him stop his car to check out what was going on. He walked to within a distance of around 400 yards of the figures and he even called out to them. The figures ignored him and the static buzzing seemed to get louder, until it was reverberating and echoing through his head. He could now discern that the noise seemed to be coming from a particular spot within that crop circle, and the crop was swaying in that spot even though there was no wind. He managed to overcome his urge to run, and as he got closer the figures looked to him and then began to run away with superhuman speed. He said he tried to run after them and could not possibly keep up. He would tell crop circle researcher Andrew Russell:

They ran faster than any man I have ever seen. I’m no slouch but they were moving so fast. I looked away for a second and when I looked back they were gone. I then got scared. The noise was still around but I got an uneasy feeling and headed for the car. For the rest of the day I had a pounding headache I couldn’t shift. 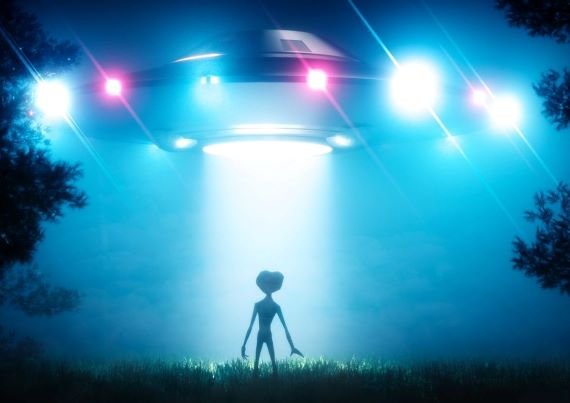 He made a full report to his department, but when media contacted them for further comment they would say, “The police officer was apparently off duty when this happened so we have no comment to make because it is a personal not a police matter.” Interestingly, the very next night would bring reports of an unmarked black helicopter patrolling the area over the crop circle for over 3 hours before flying off. When Russell himself made his way out to investigate the crop circle, he found that it was remarkably fresh, and had probably been formed not too long before the sergeant arrived on the scene. In the end, the case has never been solved and remains a mystery. Cases like this have served to make Silbury Hill a sort of mecca for UFO hunters, to the point that the droves of curiosity seekers coming here have been trampling down and damaging the mound.

What is it about Silbury Hill and why does it draw such strangeness to it and cases such as this one? There have been a lot of ideas thrown about, many of which are firmly in the world of the paranormal. One is that this place serves as some sort of energy vortex and portal between worlds, a thin spot through which strange forces can move back and forth. Another has been proposed that Silbury Hill may just be one of the many similar pyramid-like structures around the world, which could have been energy-creating beacons by which in this case ancient Britons communicated with aliens. Perhaps the very structure of it somehow harnesses earth energies in order to create a link between these aliens and the people who once inhabited this place. Whatever it is going on here, it is quite strange, indeed, and may be forever beyond our ability to comprehend.

A 200-Foot-Long Monster: Truth Or Legend?