If you think your house is haunted, you’ve seen enough movies and cable shows to know who to call. However, if you think your house is haunted and you’d just rather sell and get out, how do you explain those mysterious knocks, drafts, creaks, moaning pipes, opening doors and the like to the realtor or potential buyers? If you’re in England, you can call Andy Simms – not a ghostbuster but a skilled homebuilder who claims he can explain and fix any sound, making your house more marketable or perhaps make it livable and loveable enough that you’ll stay.

“The most common noises reported were a creaking sound (54 per cent), banging from a radiator (49 per cent), and gurglings from a toilet (26 per cent). An unfortunate 23 per cent have smelt a mysterious odour in their home at night, while randomly flickering lights have plagued 42 per cent of homes. It may come as no surprise then that 13 per cent feel their home could benefit from an exorcism.”

MyBuilder.com’s Andy Simms is a skilled tradesman and the host of an instructional video called “Ghosts or Guttering?” that aims to comfort homeowners that their house isn’t haunted, while gently breaking the news that it definitely needs maintenance … and the place to find just the right person for the job is on the MyBuilder.com website. If you’re not in England but would still like some insights on those strange nighttime sounds so many people assume are ghosts, Simms lists his “seven deadly sounds” that are the likely culprits.

The source of those ghostly howls, whistles and cold gusts of wind. A window repair service can seal or replace them – a good move for saving money on utility bills as well.

3. Banging in the basement
Something banging on your basement pipes? Don’t go down there with a flashlight – call a plumber to replace failing valves.

4. Scratching in the walls
There’s not the ghost of a person sealed in alive behind your walls trying to get out – but those mice may be dead soon and smelling like it. This often requires a double-shot – an exterminator to get the rodents out, followed by a carpenter or builder to check the foundation and boards to determine where they’re getting it.

5. Creaking stairs
That’s not a ghost creaking up and down your stairs at night – it’s more loose boards expanding and contracting as the temperature goes down and then rewarms in the morning. Nail this ghost with nails and screws to solidify the steps – you can usually find the creaks by walking on them yourself. 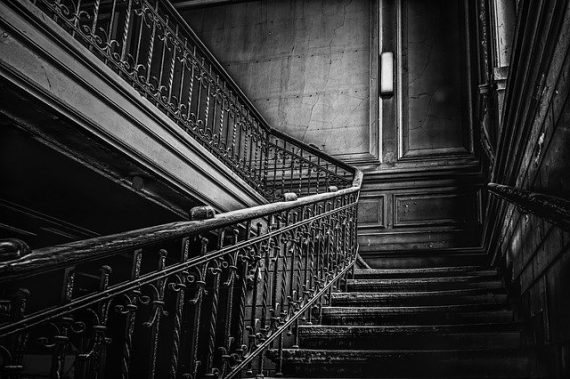 6. Gurgling
Did the previous owner drown in a bathtub? If they didn’t, it could be leaky sinks and toilets, or it could be leaks in the heating system. Plumbers and HVAC technicians can find them and fix them without an exorcist.

7. Door slamming
Indoor ghosts waking you up> More likely children who can’t sleep or wind from leaking windows (see #1). Outside, it’s likely a faulty latch on a screen door, shed door, fence gate, shutters and anything else with hinges and latches. Easy DIY project to make you feel like a real ghostbuster, or call a handyman.

If none of those remedies solve your ghostly sounds issue, try an understanding realtor or a home spirit remover … or be nice and maybe the ghost will move to your annoying neighbor’s house.

Taking a Look at the Sinister Shadow People