Ufologists and Freedom of Information: What’s in a File and What Isn’t?

A couple of days ago I wrote an article here at Mysterious Universe on the FBI's file on the late ufologist Stanton Friedman, which the FBI has now uploaded to its website, The Vault. As I noted in that same article, the file contains almost nothing on Stan's UFO-based writings and/or research. Indeed, there's no evidence that the FBI took any kind of specifically significant interest in Stan. Most of the file is on other, fairly mundane issues. With that said, I thought today I would show you a few more examples of other people in Ufology who had files opened on them, but who were watched for reasons far beyond UFOs. The Freedom of Information Acts of the United States and Australia have both allowed for the declassification of significant files on people in Ufology, but where UFOs were specifically not the primary reason for the secret watching. For example, Contactee George Van Tassel had an FBI file opened on him that runs to - wait for it - no less than 319 pages! That's almost five times larger than Stan's file. Van Tassel was primarily watched because of his politics - the FBI file makes that abundantly clear. There was also another reason, too. It was a very odd one. In April 1965, rumors flew around the FBI that Van Tassel had perfected a futuristic device which could cause blindness. It was a device connected to an unnamed "…ultra-rightist with tendency toward violence." The story ultimately fizzled out, however, and the FBI moved onto other things. It was also in 1965 that the FBI finally closed its "George Van Tassel File," referring to the man as "…an eccentric, self-ordained minister of a quasi-religious organization” and “…a mental case." You can now read the whole Van Tassel file at The Vault. 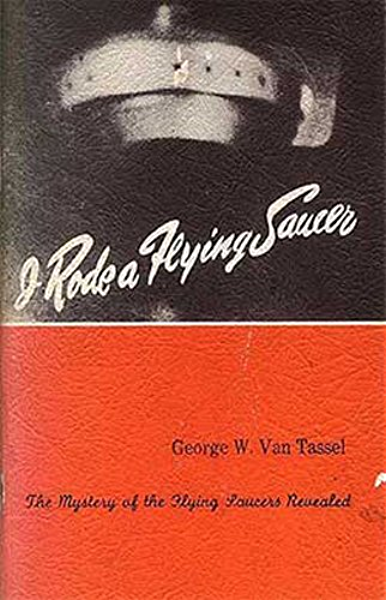 As for Van Tassel's fellow-Contactee, George Adamski, it wasn't Flying Saucers and aliens from Venus that bothered the FBI. It was Adamski's rants against the U.S. government that got the FBI angry and concerned. In his early lectures Adamski would regularly champion the Russian way of life - and its military power. For example, check out these words from Adamski, which were spoken at one of his earliest presentations: "If you ask me [the aliens] probably have a Communist form of government and our American government wouldn't release that kind of thing, naturally. That is a thing of the future – more advanced." Adamski also said (while the FBI quietly listened and took note): "Russia will dominate the world and we will then have an era of peace for 1,000 years." And there's this from the FBI's file on Adamski, too: "...the United States today is in the same state of deterioration as was the Roman Empire prior to its collapse and it will fall just as the Roman Empire did." It's clear from reading the whole file that the FBI thought Adamski's claims of alien encounters were ridiculous and of no concern. What the FBI was worried about was this: Adamski, in the early to mid 1950s, had a huge following. His lectures brought in huge audiences. And all of his massive numbers of disciples were being told that Communism was a very good thing and that the U.S. was on its way out. And that is why the FBI opened a lengthy file on Adamski. Now, let's take a trip to Australia.

Australia’s Freedom of Information Act has revealed that the vast majority of all the spying on the nation’s alien-seekers in the early days of the Cold War was undertaken by the ASIO: the Australian Security Intelligence Organization. The Queensland Flying Saucer Research Bureau was quietly and secretly watched during the 1950s. One extract from the ASIO file says: "The Queensland Flying Saucer Research Bureau is an organization with a present membership of 163 which meets regularly on the second Wednesday of each month in the Canberra Hotel and conducts a discussion group on the first Wednesday of each month in Elizabeth Street, Brisbane. The members are of great diversity in outlook, politics and religion." The file continues: "There is some Communist influence [italics mine] in the Bureau due to the presence of the Secretary, Gordon Leslie Jamieson and members of the Souwer family of Slacks Creek, to whom he is related by marriage." Of the Queensland Flying Saucer Research Bureau, ASIO recorded: "At present the Queensland Bureau does not appear to constitute any serious concern, mainly due to the control exercised by the President...but its activities will be constantly watched." The ASIO concluded: "With Soviet contact and any increased Communist Party of Australia membership, the Bureau could become of far greater interest." Vegetarians, swingers and nudists were also parts of the Australian UFO scene at the time - and, believe it or not, they too were watched for their "alternative" lifestyles. Once more, though, it was largely the communist issue that led intelligence agents to open files on Australia's UFO groups. 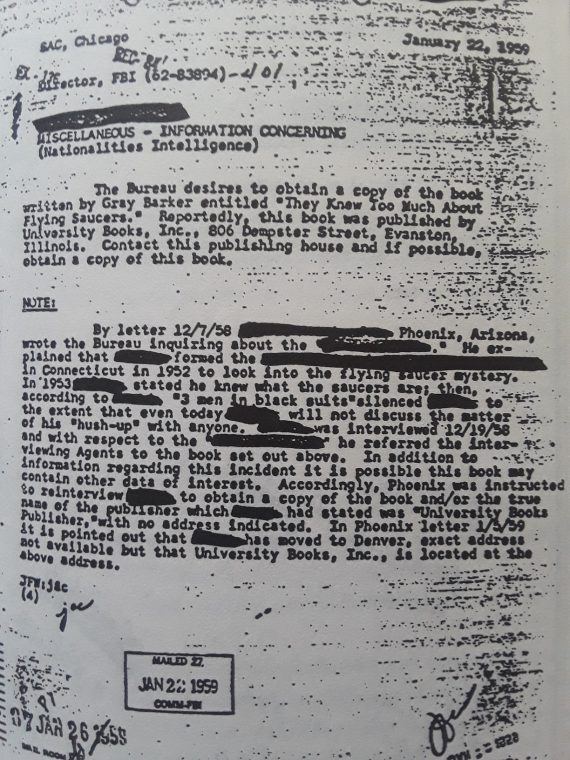 Gray Barker, the first person to write a book on the Men in Black Phenomenon (1956's They Knew Too Much About Flying Saucers), had a file opened on him in the late 1950s. The reason: someone who had read his book sent a letter to J. Edgar Hoover, demanding to know if the U.S. government really did silence people who got too close to the truth about UFOs (the person's name is deleted in the declassified file). Hoover quickly demanded that one of his special-agents get a copy of Barker's book as soon as possible, which - as the files show - is exactly what happened. Barker was terrified when he found that the FBI was onto him and that they even had a copy of the Barker book. The files makes it clear, though, that Hoover wasn't specifically interested in Barker's Men in Black. Rather, Hoover was outraged by Barker's claims that the U.S. government threatened ufologists. I could go on and on with more and more examples of how - just like Stan Friedman - files were opened on Ufologists, but when UFOs were specifically not the primary reason for the surveillance. Keep that in mind if, one day, you decide to apply to see if you have your very own FBI file. If such a file does exist, the chances are that the file will be far more about politics than black-eyed dwarfs from Zeta Reticuli.

Goat Walks on Hind Legs and Cat Grants Wishes for $127,000 — More Signs of the Apocalypse?