UFOs, a Councilor, and the Alien Woman in a Tutu

Alien encounters can truly run a wide range, from the almost believable to the outright absurd, and sometimes these encounters can happen to otherwise sane and upstanding witnesses. In some cases even the most upstanding and believable of witnesses have come forward with accounts that seem to veer right off into the outer edges of the fringe, and one of these must certainly be the time a British councilman reportedly came face to face with UFOs and an alien ballerina.

In 2004, an orthopedic technician and the future local Councilor for Winchester in Hampshire, England, a Mr. Adrian Hicks had just had lunch at a local bar in the town center, after which he went to a bookstore to pick up some books. It was just a normal Saturday afternoon in the city’s busy High Street district, and as Hicks walked along, he noticed a woman who caught his attention for reasons he could not at first understand. The lady was certainly a very pretty young blonde, but he would insist that this was not what had drawn his eyes to her. He would claim that she was dressed rather unusually in a white ballet outfit complete with a tutu, and she supposedly had a walk “like a penguin,” as well as oversized, oval shaped eyes. There was something about her that didn’t add up, the way she moved and some unidentifiable quality that convinced Hicks that she was perhaps not human. He would say:

I was near The Works bookshop when I saw this strange woman, a humanoid walking with a penguin-like gait. She had very large prominent eyes and was twirling her hands in a circular motion. She seemed friendly and totally at ease with us. She wasn’t scared, she was smiling, and seemed to be enjoying herself among us. She walked very slowly up the High Street. I remember she was very interested in the clock over Lloyds Bank. She was taking it all in. She was human enough to get away with it. Everybody’s heads were turning. It was staggering – I am not usually lost for words but I was that day. I know what human limbs look like - I set broken bones. Clearly she was not human- you could tell by the way her limbs moved. Her eyes, which were slightly pinky, were twice the size of human eyes. I know it all sounds so bizarre - especially her ballerina type dress. You couldn't make it up could you? Her clothes were outrageous - maybe they are some kind of national dress of where she comes from. I was very confused and shocked. I was going to say ‘excuse me, you’re not from around here?’ but I thought it best to leave her alone. I think we have established contact, because I have seen this ‘being’ in the High Street. Other people will have seen her. I would like them to come forward. This was definitely a close encounter of the first kind.

He would keep his sighting quiet for the next several years, as he did not want to ruin his election chances, but he finally came forward with it in 2009. Not only that, he would state that he believed that the mysterious woman was only one part of a greater alien presence in the area, all somehow linked to the nearby Chilcomb military base. Indeed, he would say that he had seen several UFOs around and above Chilcomb military firing ranges, and he was so obsessed with the “alien woman” that he even spent £400 out of his own pocket to have an artist make an impression of the humanoid. He has also gone on to become a staunch advocate of government disclosure on UFOs, and he has even go as far as to say that it is for this reason that he had decided to go into politics in the first place. He has gone on and on in posts and videos about an organization called Majestic, which is supposedly a sort of shadowy joint U.S. and U.K. group dedicated to suppressing the UFO and alien phenomenon. He has said that this group has covered-up the many UFO sightings he claims have happened around Winchester, and has explained of this and of the organization:

Majestic’s success in protecting mankind from the shock that we are far from alone in the universe has been completely successful. For the past 60 years the subject has been shrouded in secrecy. The magnificent job they have done in keeping from us, the ordinary citizens, that we are not alone, is in itself a truly remarkable achievement. An organization that started small but is now colossal, its dilemma is when to formally announce that extra-terrestrial contact has been established. There's obviously some connection between the military and the UFOs. There are those that know what's going on but my point is that it's time the people were told what's happening.

Amazingly, there have been others who have come forward with their own weird UFO experiences in the area since Hicks told his bizarre story. One Bernadette Ludlow would write a letter to the Hampshire Chronicle who claims that this has been going on around Winchester for decades. She writes:

SIR — I read with great interest your recent articles about Cllr Adrian Hicks and his revelation about bumping into an extraterrestrial walking up the High Street in 2004. Your article about this incident is most revealing, and what Cllr Hicks has said to the press should most certainly be listened to. Why, you may ask? The answer is simple. This is not the first time this has happened here in Winchester at all. It happened in 1976 and 1977, starting with one evening in November 1976. Joyce Bowles and Ted Pratt had an amazing encounter with aliens after the car they were travelling in shuddered to a halt on the Chilcombe Road outside Winchester. This was reported by the Daily Mail at that time, also that there were eight other sightings of glowing cigar shaped UFOs in the Winchester area that weekend. Both Joyce Bowles and Ted Pratt had other similar experiences on March 7, 1977, and again in June 1977. All were reported in the local and national press and all were in and around the Chilcombe area near Winchester. I think Cllr Hicks is a very brave person to come out with his amazing encounter with one of our visitors. Clearly there is something going on in the Chilcombe military range area that has great significance for us all. 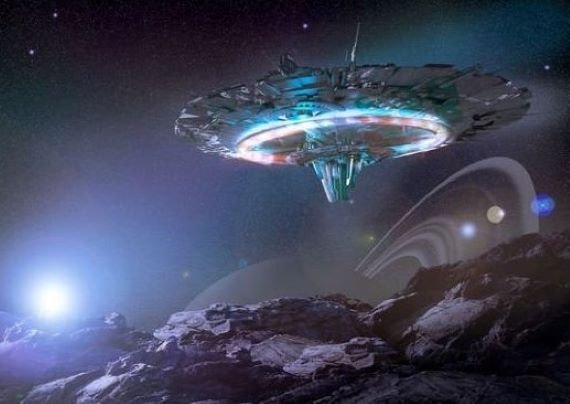 1977 was apparently a pretty weird year for Winchester, as there were also countless reports at the time of residents picking up strange transmissions and voices over their TV sets at the time. Another witness claims to have seen UFOs around the Chilcomb Military Base as well back in the 60s, and also claims to have heard the otherworldly TV transmissions in 1977. The witness has said on the site collinandrews:

Regarding UFO activity at the Chilcomb Military Base and referred to by Councillor Adrian Hicks on this website, I witnessed a rocket type object glowing and with a flaming tail as it moved slowly horizontally across the top of the hill, from east to west and just below the Morestead road that runs over the hill. This was at about 2.0 am one night during 1960 while I was looking out from a high level ward in Winchester Hospital. There was no sound that I could hear from there.  This was before the construction of the M3 motorway which is there now. I was in the same hospital where Mr. Hicks works which is on high ground with good views to its south and east.

The strange voice heard by thousands of people in 1977, was also heard by me. Like Colin Andrews we both lived in Andover, 14 miles north of Winchester, and like him I also heard the voice as it broke into a news program I was watching. The picture broke up first as the sound of the voice came up louder and took over. A few weeks later I heard on the news that it was said that some students cut into the underground cables to the transmitter and used the transmitter to send it out. My father was a radio ham at the time and he said not only would they have needed a lot of power but that the power that would be running along the cable, they would have had to have some BIG crocodile clips to clip onto the cable or get fried.

There have even been a few scattered people who have claimed over the years to have seen the same alien woman who Hicks claims to have seen. One of these was a caller to an episode of Coast to Coast AM in 2009, who claimed that he had encountered the same mystery woman and that she had asked him how to operate a car with an automatic transmission. The woman was described as wearing the same ballerina outfit, and having very large, oval shaped eyes. What is going on here? Is there anything to all of this? While there indeed have been quite a few UFO sightings documented from the Winchester area, we are left to wonder whether Hicks really did see that strange woman, and if she was really an alien or just a really strange lady. Whatever the case may be, it is certainly a wild story all the same, made even more so by the fact that it has been given by someone in a position to be traditionally considered to be a reliable witness.