When Aliens Dined on Humans: If You Believe the Tale…

A couple of days ago I wrote an article here at Mysterious Universe on the sensational and over the top story of the "alien underground base" at Dulce, New Mexico. You might think a story like that couldn't be topped in the unlikely stakes. You would be very wrong. Check out the following. It was in the late 1980s when Ufologist Leonard Stringfield – still highly active in Ufology at the time – received the astonishing and terrible "facts" concerning an incident which supposedly occurred in early 1972, in Tong Li Sap, Cambodia, which is situated in south-east Asia, and when the Vietnam War was still raging. The story is told in Stringfield’s UFO Crash / Retrievals: The Inner Sanctum, which was self-published in July 1991. A group of expert marksmen were secretly and silently parachuted in late one night to an area that bordered closely on North Vietnam. The operation was a vitally important one: to take out a North Vietnamese facility that, U.S. Intelligence had been able to deduce, was clandestinely listening in on top secret conversations between high-ranking American personnel in South Vietnam. The team camped down for the night, fully prepared to make a full assault on the North Vietnamese team as dawn broke. It never happened. Rather, it didn’t happen the way that it was envisaged. The group made a skillful and stealthy approach on the area, using the dense foliage for cover. Only to find to their terror that something unearthly had changed the situation – and drastically so, too. 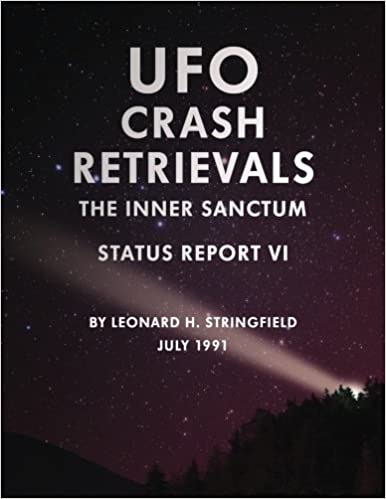 As the team got closer to the area in which the North Vietnamese unit was hunkered down, they suddenly found themselves confronted by a large, ball-like craft that sat atop three, sturdy, metallic legs. The craft suddenly began to hum – something which caused instant sickness, dizziness and disorientation on the part of the U.S. troops. Fighting the need to throw up and get out of the area quickly, they were suddenly rooted to the spot by a group of strange-looking, humanoid creatures that, today, we would call "the Greys" of UFO lore. Barely believing what they were seeing, the group was even more horrified by what the creatures were doing: handling various human body parts and placing them into large containers: arms, legs, torsos, heads; the grisly list went on and on. Some were the remains of white people, others were black. Several looked like Vietnamese. Managing to keep the sickness and dizziness under some degree of control, the team crawled forward on their stomachs. The commanding officer silently gave the order to fire: salvos of bullets slammed into bodies of the creatures – who barely seemed fazed by the assault. That is, aside from one, which was said to have been killed by a shot to the head. Several of the U.S. troops lost their lives, and others were left severely burned by the effects of an unknown weapon. The aliens then quickly retreated, loaded the containers into the craft, and vanished into the skies above.

In no time at all, another team was on the scene – "CIA types," as one of the survivors told Stringfield. All of the surviving men were given certain, mind-altering drugs to try and make them forget the incredible affair – which, apparently, worked (so we're told...). At least, for a while it worked. In the late 1980s, however, two members of the team started to experience dramatic and nightmarish flashbacks to those events of April 1972, which prompted one of the team to contact as many of the others who could be found. Two were dead, three could not be located, but the rest were able to meet up in August 1988 and decided that the story needing telling. After being approached with the story, Stringfield did exactly that: he published it for anyone and everyone that wanted to see it. Yep, that's quite a story - and that's the underestimation of the month. Possibly of the year. And I don't care how credible the source might have been, let's see some evidence. If it can't be found, I suggest that we lay the whole thing to rest.

The Bizarre Case of the Flying Priest