Witch Battles and a Strange Haunting in England

Some ghost stories manage to slip through the cracks to remain forgotten, but no less strange. Our story here revolved around a sleepy rural place in the rolling hills of the English countryside called Coker Hill, in Somerset in southern England, which is by all appearances a quaint, quiet place that one might not really typically give much thought to and may even drive right on by, but in 1880 there would be a series of supernatural events that caused quite a stir at the time, which although obscure are rather an odd case of ghosts, magic, and witchcraft.

In that era, here lived an anonymous woman, her husband, and their two children, who had a quiet and uneventful life until one evening in June of 1880, when the woman suddenly was overcome by some sort of fit, falling down and writhing about on the floor as if possessed. As she had this seizure, it was reported that thunderous knocks and thuds began to reverberate through the walls of the house, as if someone were pounding them with their fists, and when she came out of her fit the noises stopped. This reportedly continued for several nights in a row, always after midnight and so intense that she found herself unable to sleep. At the time her husband, a travelling salesman, was out of town, and so at a loss as to what to do, she had some relatives keep watch on her one evening and they experienced the phenomenon for themselves, with the woman convulsing uncontrollably as the walls, ceiling, and even under the bed issued forth loud bangs and thuds just after midnight right on schedule.

By this time the strange phenomenon had continued for nearly a week, and neighbors also complained of having heard the anomalous noises, with the unexplained cacophony increasing in intensity and volume over several nights, to the point that locals began showing up at the house out of curiosity to see for themselves what was going on. When word got out that this was apparently the doing of ghosts and that the woman within would go into a trance-like, epileptic state like a demon possession during these incidents, even more curiosity seekers began to flock to the residence hoping to see something weird. They would loiter about the house, sometimes up to 200 to 300 people at a time, until just after midnight, when right on cue the banging and knocking would echo out all around, described in some reports as being a “cannonade into the night.” One journalist who arrived to one of these scenes to investigate would actually enter the premises to experience it up close, and would say of it:

When I got in the sound seemed to be immediately in front me. I turned towards the window, and the knocking was then apparently in front of me. I could see nothing, but it resembled as if a carpenter was beating a box with a mallet. I turned completely round, and the knocking was again in front. You may depend, sir… that there is something in it, but what I cannot make out. I looked under the bed, examined the walls, and went outside see there was any communication, but found nothing. All this took place when several were in the room, and looked rather gallied, I can tell you, at each other. The woman, I am sure, had nothing to do with it. She was in bed, and it would be impossible for anyone in the room to give such loud blows even if he were beating the bedstead or the flooring. 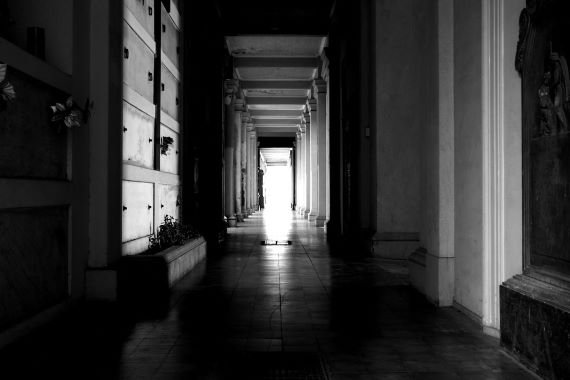 Interestingly, when a doctor came to examine the woman and held her hands the knocking and banging stopped, only to start again as soon as he let them go. On some occasions there was seen some sort of apparition in the room with the woman during these fits, described as a vaguely cat-shaped black blob that “crawled up the wall of the bedroom, ran along the ceiling, and then fell with a heavy thud on the floor, vanishing instantly.” At around the same time this strange phenomenon was going on, there began to be other reports of strangeness around town. Some of the residents described being followed or even menaced by a very large black magpie, which was widely believed to be the familiar of a witch, and so rumors began to be whispered that the woman was under attack by black magic. Because of this, efforts were made to fight off the witch’s magic with counter spells, and one report of this reads:

Matters were beginning to look serious and it is stated that an inhabitant of East Chinnock determined to rid the woman of her enemy – for it was taken for granted that she was overlooked (cursed) by someone who had spleen against her. Having armed himself with piece of beeswax, he proceeded to the cottage and went through certain performances in the midst of the family group. The wax was melted before the fire, certain incantations were performed, and the 68th Psalm was read, in which the following verse is found: ‘wax melteth before the fire, let the wicked perish the presence of God’ which, it is stated, suggested the ceremony. The High Priest declared that the spell was broken, and that there would be no further disturbance.

What happened here? It is easy to come to the conclusion that this was a classic case of a poltergeist, and that it revolved around this poor, unnamed woman. Yet how does that explain the clues of witchcraft, and the tale of using magic spells? Was this perhaps something more? Or is it just a piece of local legend and lore, and nothing more? Who knows? Whatever the case may be, it is an odd little curiosity of a mostly forgotten haunting that serves to stoke the imagination.