Soap opera writers know that one sure way to bring life into a dying plotline is to bring in a ghost. That’s also what’s happened in the real-life soap opera that is the life of one Amethyst Realm, a woman who claims she has dealt with her problems with men by dating ghosts, having sex with ghosts and becoming engaged to a ‘very special’ ghost. If it sounds like her plotline is waning, hang on – Amethyst just announced she dumped her betrothed at the altar because … he’s changed. Is this ‘As The Spirit World Turns’ turning into ‘The Bachelorette: Ghost Edition’?

“It was going really well until we went on holiday and that was about last May and then he completely changed. I think maybe he fell in with a bad crowd when we were on holiday. He just started becoming really inconsiderate, he’d disappear for long periods of time, when he did come back, he’d bring other spirits to the house and they’d just stay around for days.”

So begins the latest episode of the ghostly romance novel that is the life of Amethyst Realm, a spiritual guidance counselor from Bristol, England, who has been spilling her romantic guts to the hosts of the ITV show, This Morning, since 2017. Back then, she was playing the electromagnetic field and bragging about having had sex with 20 ghosts since she dumped her last living boyfriend 12 years before. She explained that, while her live fiancé was away, she was propositioned by a ghost who promised that once she tried spirit, she’d always be near it.

“I had sex with the ghost. You can feel it, it’s difficult to explain. There was a weight and a weightlessness, a physical breath, and stroking, and the energy as well.”

Amethyst found that this ghost was right and she began searching for her Mr. Light. Ghosts are apparently not the marrying kind, because she returned in 2018 to reveal that she’s trying to have a baby with a ghost named Ray who she met in Australia where he became lovestruck and followed her back to England. At that time, Ray also got a voice and proposed to Amethyst – a proposal she happily (at the time) accepted. It must take a long time to get the proper permissions to marry a ghost (another woman who married the ghost of a pirate finally had to do it on a boat in international waters) because the wedding in Wookey Hole (popular caves in Somerset) wasn’t scheduled until this year. That’s when the fateful pre-nuptial vacation happened, as she describes on "This Morning." (Cue the sad music.)

“I think he started doing drugs and partying a bit much.”

The partying continued back home – Amethyst would hear loud noises coming from Ray’s man-ghost-cave. Her spiritual guidance training must not have prepared her for ghost addiction problems, so Amethyst says she exorcised him by placing black tourmaline around the house (it gets rid of negative energy) and cleansing it with sage. (Does this work for the coronavirus too? Asking for a friend.) Being more of a relationship counselor, she felt it was proper to explain her reasons to her sister (who was going to be a bridesmaid) and Ray’s family (really!).

“She was [sad]. Ray’s family I’ve had a little bit of contact with and they’re sad about how he’s behaving.” 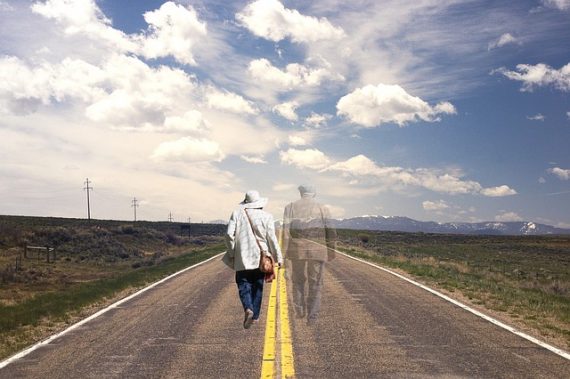 As soap opera fans know, the show must go on, so Amethyst has learned from her past and is now dating extraterrestrials. Gotcha! That would be a great plot twist, Amethyst says she hasn’t sworn off ghosts forever … just for a while.

If this were a soap opera, here is where the producers would place a teaser …

Tune in next week when we hear Amethyst say: “Mom, I’d like you to meet Bigfoot.”