From a young age William Tompkins was a bit different. Beginning from age 9 he started crafting an impressive fleet of handmade models of Navy ships at a tiny 1:600 scale and meticulously detailed down to every last antenna, turret, lifeboat and airplane. By 1941, at the age of 17, Tompkins had a fleet of around 50 such ships, which were impressive enough that they would be displayed in the window of the Broadway department store on Hollywood Boulevard in Hollywood, CA, and this was where they would capture the attention of the Navy. When officers got a look at the model ships, they were surprised to notice that the level of detail included was considered to be perfect, including many details that were deemed sensitive or even classified secrets, and which made it all seem suspicious that such a young man should have access to these designs. After all, this was in the days leading up to World War II, not long before the attacks on Pearl Harbor, and so the Navy was very interested in how this civilian boy could have gotten such details for his ships. This is how Tompkins would begin his journey along the road into the bizarre, and be initiated into the world of secret insiders spilling their guts on classified information concerning aliens, UFOs, and all sorts of strange stuff.

Navy officials approached Tompkins’ father to interrogate him on how his son had gotten such details, and questioned the boy as well, and the answer to how he had done it was perhaps even more surprising than if he had been getting top secret information. You see, it seemed that Tompkins had pretty much a photographic memory and sense for size and dimensions, so he had simply seen the ships anchored in Long Beach harbor that were open to the public at the time and which his father often brought him to see, committing them to memory in order to be reproduced in his painstakingly crafted models. It was such an astonishing ability that Naval Intelligence was greatly impressed, and in 1942 went about having Tompkins pulled from his second year of high school in order to be inducted into the Navy.

He would complete his training and make his way quickly up the ranks of Naval Intelligence, eventually replacing a Commander at North Island Naval Air Station in San Diego and getting involved in “advanced technology projects,” after the war going on to work for the Douglas Aircraft Company and then becoming the corporate director of North American Advanced Space Research and a member of the Red Team at General Dynamics Corporation, along the way also serving on the Apollo Space Program. It seems that this is the chapter in his life where things would begin heading into the bizarre. Tompkins became a key player in the aerospace field, instrumental in numerous projects involving naval intelligence, aerospace engineering, special projects, research for above-top-secret space programs, and various highly top secret programs, and he was an integral part of think tanks across several aerospace firms working on other such highly classified projects. In later years, Tompkins would come forward with his insider information of these projects, and some of them are rather outlandish, to say the least.

Among projects Tompkins claims to have been involved with were those that were directly related to aliens and UFOs, as well as “extraterrestrial life and technology.” Among the projects he would claim to have been involved with were reverse engineering alien technology, as well as analyzing UFO technology recovered from the Nazis, and using it to create advanced antigravity spacecraft and extraterrestrial communications systems, all of it funded with black budgets. Indeed, he claimed to have been involved with numerous spacecraft designs utilizing alien technologies for various aerospace contractors, many of which he would say were actually beamed directly into his brain by aliens, and he also claimed that these spacecrafts were being put into battle groups by the Navy in order to launch a sort of secret space force. This all got even more bizarre when he additionally claimed that there were several species of aliens involved in human affairs on this planet, something he had first become aware of during his time working with a think tank called Project RAND. He would say of this:

Project RAND, a way-above-top-secret scientific think tank… was created in December 1945 as a special contract to Douglas Aircraft Company, at the Santa Monica Municipal Airport. Inside a highly classified, walled-off area in the Douglas Engineering Department, Project RAND studied the implications of threatening alien agendas… Some unbelievable space studies came out of the Douglas Think Tank. They revealed that not only were certain U.S. governmental heads aware of the alien involvement in human affairs, but that the Soviet Union was aware of the situation, too. With possible alien “assistance,” the Soviets were bent on getting to the Moon first, in order to establish missile bases there and control the entire planet. 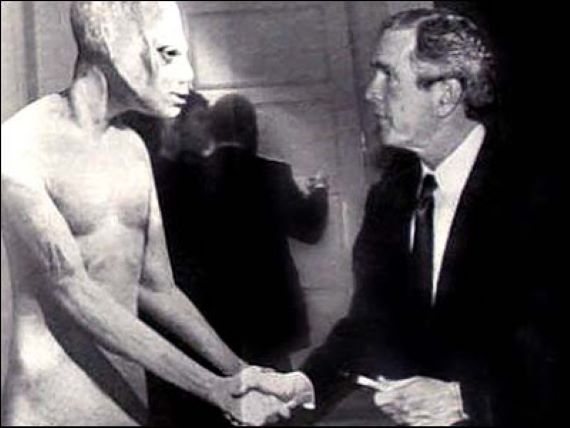 This is where things begin to get even weirder than they already are, as Tompkins would repeatedly come forward with new information to add to this bonkers mythology of alien races on Earth. He particularly spoke heatedly about a race of reptilians he called the “Draconian Reptilians,” which according to him were in league with the Nazis during World War II. These reptilian aliens allegedly supplied the Germans with all sorts of advanced technology that they used to make working UFOs and beam weapons, as well as insight into genetic and biotech research, human cloning, and life extension technology. The Reptilians also allegedly helped the Nazis to reach the moon and other planets, and also helped them build subterranean bases in Antarctica. Luckily for the U.S., Tompkins claims that America and the Allies were aided by another race of aliens called the Nordics, tall humanoid beings who helped them out with technology of their own, as well as being instrumental in developing the space force, which supposedly includes a “2.5km Naval Spacecraft Carrier and a 1.4km Naval Spacecraft Battle Cruiser.” Tompkins claimed to be in frequent telepathic contact with these Nordic aliens, and UFO researcher Makia Freeman has said of this:

Tompkins believes the Nordics have been helping him all along by clearing the way for him to do certain things… He thinks he has been protected because of his association with Nordic ETs, specifically two women and a man who used to be his secretaries. As an aside, he did not know for a long time that he even had ETs working for him. He only found out when one day, one of them fell down the stairs and was taken to the hospital in a grave condition. He overheard her admitting she was not who she said she was and answering to another boss or captain. 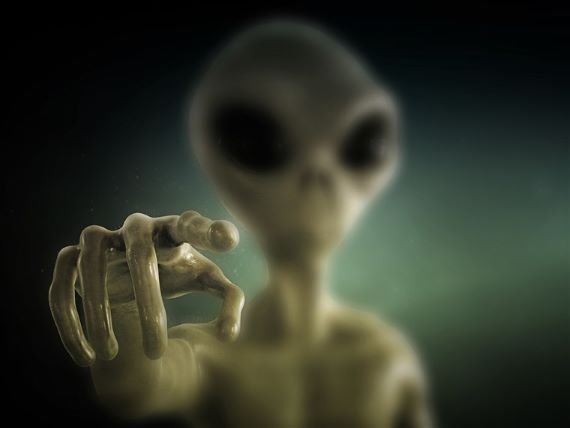 Further down the rabbit hole we go. Tompkins paints a picture of two distinct aliens races basically using humans as pawns their own millennia long battle here on Earth, and he has compiled the entire outlandish story into an in-depth and highly technical, very weird book called Selected by Extraterrestrials, which covers two volumes and goes into painstaking, impressive detail on his claims. He has even said that the book was secretly condoned by his superiors in the U.S. Navy, so that people could be woken up to the truth. Tompkins has said of this:

Early in 2001, I called on Admiral Hugh Webster, Navy League Corporate Director… We had a five-hour meeting on my ongoing book–writing concerning the extraterrestrial threats to our planet. After Admiral Webster read portions of my document and backup technical documentation, I asked him, “How much of this can I include in a published book?” He said. “Bill, tell it all. This is most important to our country. Don’t leave anything out.”

After coming out with his book and his version of “the truth,” Tompkins gave a number of radio and TV interviews, and his wild, far-out story was heavily discussed and debated. Many questions swirled at the time, and still do, concerning his bonkers tale. We do know that his credentials are sound, and that he was a highly respected member of the aeronautics field, but what of his other claims? Is there any truth to any of this, and if not, why would he risk his reputation to make up such a completely ludicrous tale? His claims have been criticized for being really well beyond the fringe, something more at home in a bad science fiction novel than the real world, but there have been those who also defend his claims. Unfortunately, Tompkins passed away in 2017 at the age of 94, and so whatever truth there are in his whistleblower claims he took to the grave with him. Is there anything to his stories? What did he see behind the veil of secrecy? Were these real revelations or just an eccentric man spitting sci-fi nonsense? Is he a champion of disclosure or a fruit loop? For such an apparently valued aerospace figure it seems odd that he would spin such yarns, and it all leaves us with yet another enigmatic insider making bold claims it is hard to know what to do with.

Megafloods on Mars Billions of Years Ago