Of the many and varied monstrous, supernatural beasts of Wales, certainly one of the most fear-inducing was the Gwrach y Rhibyn, a water-based entity. Notably, it is also referred to as "The River Specter," due to the creepy claims that it lurks in Welsh rivers, ready to pounce upon the unwary and steal their souls. The exploits and nature of this nightmarish thing were expertly chronicled back in the 19th century, by a man named Wirt Sykes. At the time, he was the American Consul for Wales. While the story of the Gwrach y Rhibyn is told in Sykes’s 1880 book, British Goblins, it is to Sykes’ original notes we turn our attentions to. They tell a story that is both horrific and unforgettable: "A frightful figure among Welsh apparitions is the Gwrach y Rhibyn, whose crowning distinction is its prodigious ugliness. The feminine pronoun is generally used in speaking of this goblin, which unlike the majority of its kind, is supposed to be a female. A Welsh saying, regarding one of her sex who is the reverse of lovely, is, ‘Y mae mor salw a Gwrach y Rhibyn,’ (She is as ugly as the Gwrach y Rhibyn.)" 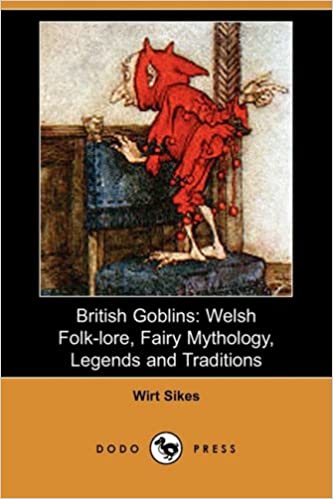 Sykes wasted no time at all in describing the nature and appearance of the creature. It was clearly no normal animal, as Sykes made abundantly clear to his readers: "The specter is a hideous being with disheveled hair, long black teeth, long, lank, withered arms, leathern wings, and a cadaverous appearance. In the stillness of night it comes and flaps its wings against the window, uttering at the same time a blood-curdling howl, and calling by name on the person who is to die, in a lengthened dying tone, as thus: ‘Da-a-a-vy!’ ‘De-i-i-o-o-o ba-a-a-ch!’ The effect of its shriek or howl is indescribably terrific, and its sight blasting to the eyes of the beholder. It is always an omen of death, though its warning cry is heard under varying circumstances; sometimes it appears in the mist on the mountain side, or at cross-roads, or by a piece of water which it splashes with its hands."

Moving on, Sykes said: "The gender of apparitions is no doubt as a rule the neuter, but the Gwrach y Rhibyn defies all rules by being a female which at times sees fit to be a male. In its female character it has a trick of crying at intervals, in a most doleful tone, ‘Oh! oh! fy ngwr, fy ngwr!’ (my husband! my husband!) But when it chooses to be a male, this cry is changed to 'Fy ngwraig! fy ngwraig!' (my wife! my wife!) or ‘Fy mlentyn, fy mlentyn bach!’ (my child, my little child!) There is a frightful story of a dissipated peasant who met this goblin on the road one night, and thought it was a living woman; he therefore made wicked and improper overtures to it, with the result of having his soul nearly frightened out of his body in the horror of discovering his mistake. As he emphatically exclaimed, 'Och, Dduw! it was the Gwrach y Rhibyn, and not a woman at all.'"

Although most of the reports of the creature were from centuries earlier, it's a fact that at least some of the accounts that reached Sykes' eyes and ears came from relatively recent times, as the man himself made very clear: "The Gwrach y Rhibyn recently appeared, according to an account given me by a person who claimed to have seen it, at Llandaff. Surely, no more probable site for the appearance of a specter so ancient of lineage could be found, than that ancient cathedral city where some say was the earliest Christian fane in Great Britain, and which was certainly the seat of the earliest Christian bishopric. My narrator was a respectable-looking man of the peasant-farmer class, whom I met in one of my walks near Cardiff, in the summer of 1878. 'It was at Llandaff,' he said to me, 'on the fourteenth of last November, when I was on a visit to an old friend, that I saw and heard the Gwrach y Rhibyn. I was sleeping in my bed, and was woke at midnight by a frightful screeching and a shaking of my window. It was a loud and clear screech, and the shaking of the window was very plain, but it seemed [218] to go by like the wind. I was not so much frightened, sir, as you may think; excited I was - that’s the word - excited; and I jumped out of bed and rushed to the window and flung it open."

Sykes' source of the story continued with the following words: "Then I saw the Gwrach y Rhibyn, saw her plainly, sir, a horrible old woman with long red hair and a face like chalk, and great teeth like tusks, looking back over her shoulder at me as she went through the air with a long black gown trailing along the ground below her arms, for body I could make out none. She gave another unearthly screech while I looked at her; then I heard her flapping her wings against the window of a house just below the one I was in, and she vanished from my sight. But I kept on staring into the darkness, and as I am a living man, sir, I saw her go in at the door of the Cow and Snuffers Inn, and return no more. I watched the door of the inn a long time, but she did not come out. The next day, it’s the honest truth I’m telling you, they told me the man who kept the Cow and Snuffers Inn was dead - had died in the night. His name was Llewellyn, sir - you can ask any one about him, at Llandaff - he had kept the inn there for seventy years, and his family before him for three hundred years, just at that very spot. It’s not these new families that the Gwrach y Rhibyn ever troubles, sir, it’s the old stock." That was quite a story, to say the least!

Sykes added: "The close resemblance of this goblin to the Irish banshee (or benshi) will be at once perceived. The same superstition is found among other peoples of Celtic origin. Sir Walter Scott mentions it among the highlands of Scotland. It is not traced among other than Celtic peoples distinctly, but its association with the primeval mythology is doubtless to be found in the same direction with many other death-omens, to wit, the path of the wind-god Hermes." Sykes signed off: "The frightful ugliness of the Gwrach y Rhibyn is a consistent feature of the superstition, in both its forms; it recalls the Black Maiden who came to Caerleon and liberated Peredur: 'Blacker were her face and her two hands than the blackest iron covered with pitch; and her hue was not more frightful than her form. High cheeks had she, and a face lengthened downwards, and a short nose with distended nostrils. And one eye was of a piercing mottled gray, and the other was as black as jet, deep-sunk in her head. And her teeth were long and yellow, more yellow were they than the flower of the broom. And her stomach rose from the breast-bone, higher than her chin. And her back was in the shape of a crook, and her legs were large and bony. And her figure was very thin and spare, except her feet and legs, which were of huge size.' The Welsh word 'gwrach' means a hag or witch, and it has been fancied that there is a connection between this word and the mythical Avagddu, whose wife the gwrach was."

Whatever Happened to the Abominable Snowman?