The Westernized version of the supernatural beings called ‘genies’ is generally a benevolent magical creature -- sometimes good-looking, sometimes funny, sometimes a sexy female – who is trapped in a lamp or container, released when it’s rubbed and grants at least wishes to the owner and rubber of the container. Those who live in the Middle East or southeastern Asia know better – their ‘djinn’ or ‘jinn’ are more often devils, demons or shape-shifters who impart misfortune, diseases and other evils to those who cross their paths. Therefore, someone living in India would probably fear contact with one, and someone with a higher education would scoff at the idea that it could actually grant three wishes. Thus it’s surprising that a doctor in India paid $95,000 to two men for a ‘magic’ lamp. While there was no djinn inside, he definitely suffered a ‘misfortune’.

“In his complaint filed last Sunday, Khan said one of the men pretended to be an occultist and made a “jinn” -- a supernatural figure -- appear from the lamp, local media reported. But when Khan asked if he could touch the genie or take the lamp home, they refused, saying it might cause him harm, the complaint stated. Eventually they sold the lamp to him, promising it would bring health, wealth and good fortune.”

According to various Indian media sources, Dr. Laeek Khan, of Meerut in the state of Uttar Pradesh, performed surgery on a patient named Sameena in 2018. During a follow-up visit (apparently to her home) for post-surgery care, Khan claims she introduced him to her ‘sons’, an occultist or tantric and another man who appeared to make a djinn appear from a ‘magic’ lamp. When Khan asked if he could take it home, they refused, saying it was worth Rs 2.5 crore ($335,000), but they would let him have it for the incredibly low, one-time-only price of Rs 70 lakh ($93,000), assuring him that the investment was well worth it because the genie would make him a billionaire. They also warned Khan he had to wait for two years before using the lamp and, of course, to tell no one about it or bad things would happen to his family. 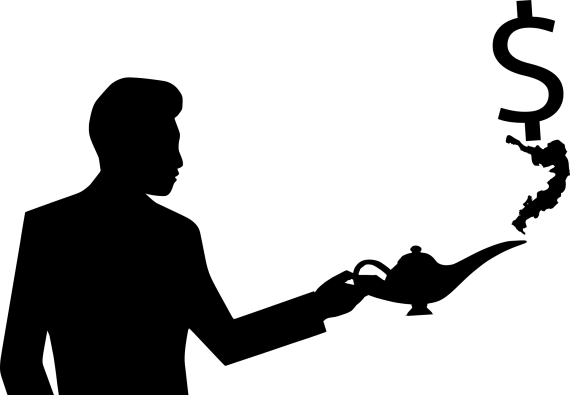 “During this time, my son fell ill and he was admitted to a Meerut hospital. His condition became serious and he was referred to a Delhi Hospital. They told me that they had cursed my son, and if I didn’t pay them Rs 50 lakh, they would use black magic to curse my other family members. They kept feeding me something, and I was completely under their control.”

It appears Khan tried rubbing the lamp and nothing happened. When he tried to return it, they took him to a baba (a “godman”) who appeared to be able to conjure up djinns. The baba didn’t fix his lamp and Khan realized the djinn was just one of the men in a costume, so he finally went to the local police, who believed him and last week arrested the two conmen. The spouse of one, also a suspect, is still on the run, and there’s no word on whether ‘Sameena’ was involved. It turns out the two men have been running their genie scam for a while in the area and the police and local citizens were glad to get them off the streets.

Needless to say, Dr. Laeek Khan is still out $93,000, plus some dignity and reputation in the local community. Is there a moral to the story? Here’s one: people who know the real story NEVER dream of genie.

The Strange Case of the Kaikoura Lights of New Zealand