Today's article is a review of a new book on the matter of Bigfoot. The author: Lyle Blackburn. The title: Boggy Creek Casebook. Lyle has had a longstanding involvement in the matter of Bigfoot-seeking, and particularly so in the U.S. state of Arkansas. Most important of all, Lyle is not - thankfully - one of those armchair monster-hunters who pontificate from the living-room couch. Rather, Lyle knows that to get answers requires investigations and expeditions: you have to hit the road, interview the witnesses, and keep digging and digging for answers. Lyle's previous books include The Beast of Boggy Creek and Beyond Boggy Creek. In light of that, you may wonder how Lyle can write a third book on the monsters of Fouke, Arkansas - and its surroundings. Well, it goes back to what I said above: Lyle gets out there, finds the people, does the interviews, and puts a coherent investigation together. Not only that, over the course of the last decade, or thereabouts, Lyle has been embraced by the people of the area, has become respected by the locals for his serious approach to the legend, and has given new life to the matter of the "Fouke Monster," as the beast(s) became known back in the early 1970s. With that all said, now onto the book itself.

What makes Lyle's new book important is the fact that this one chronicles every known case from the 1900s to the present. This is, then, essential reading for anyone who wants to know about the Fouke Monster - both then and now. On the matter of that angle, it should be be noted that for many people the story of the Fouke Monster began in the early 1970s. Boggy Creek Casebook, however, demonstrates this is actually very far from the case. We learn that the first known incident occurred way back in 1908. It involved a young girl named Kate Savell. Lyle states that while Kate was "...playing in the nearby woods, she noticed a hairy, man-like animal watching her from behind some bushes. It quickly disappeared into the shadows and was not seen again." This incident is very important, since it occurred long before the term "Bigfoot" was created and also long before there was any kind of widespread pop-culture about Bigfoot. Jumping forward to 1910, there's a very significant case to address. It's an important one because it made the pages of the Daily Arkansas Gazette newspaper. In part, the local reporter said that a "strange beast" - one that had a roar like a lion - had been seen in woods north of Spring Lake Park - close to Texarkana. The "wild beast" was never found. 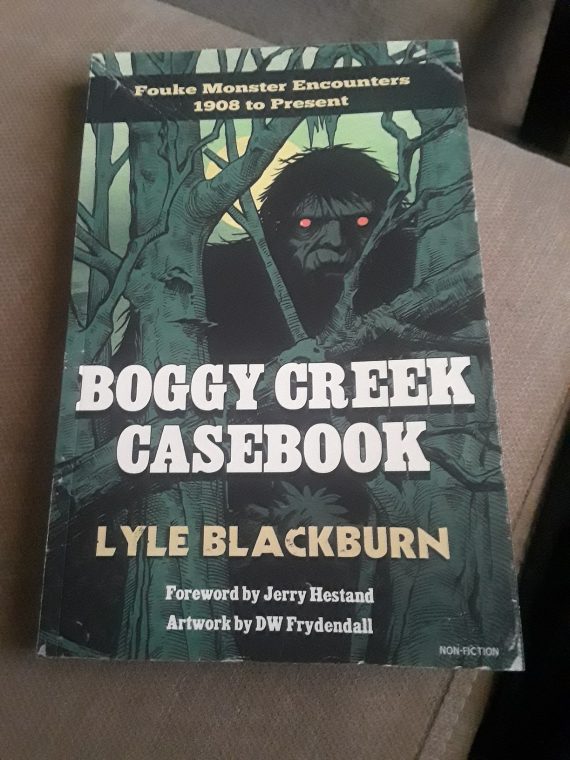 Nineteen-Fifty-Four was the year in which a woman and her children had a close encounter in their Fouke-based field. The thing was both "large and hairy." The 1960s saw a significant number of cases, as Lyle reveals. Of the 1965 incident of Fred Crabtree - who was out hunting in woods south of Fouke - Lyle reports that Crabtree "...noticed a dark, shadowy creature as it stood among the trees...it was impossible to tell if it was truly an animal or if it was some kind of  wild man." Of course, if you know your cryptozoological history, you'll also know that Fouke and monsters came together in amazing - and sometimes horrific - fashion in the 1970s. I'm talking about the docudrama, The Legend of Boggy Creek. While reports in the 1980s and 1990s were sparse, that wasn't the case when the 2000s kicked in. Lyle chronicles various cases of Bigfoot-type creatures still roaming the area - and with the most recent report having occurred in March 2019 on the bank of the Sulphur River. In this case, an impressive number of huge tracks were found, demonstrating that the Fouke Monsters are still around.

Lyle also provides the reader with a welcome description of the area - in a section of the book titled "Wild Country" - and highlights the local "Monster Mart," a bustling store for creature aficionados and a place where you can buy posters, books, t-shirts, key-chains and mugs. Indeed, Fouke and its resident monsters are a staple part of the area - and that's how things will likely stay. The final words go to Bigfoot researcher and investigator, Jerry Hestand: "The accounts contained in this book are truly, in my opinion, the most comprehensive listing of information about one of the most iconic Bigfoot mysteries of all time."