A British doctor is claiming to do what Elon Musk has only dreamed about – and at a cost that the Tesla and SpaceX billionaire could easily cover with the loose change under his sofa cushions. By beaming lasers from his backyard at the Red Planet for the past ten years, he claims to be terraforming Mars – and that, under current space laws, allows him to stake ownership in what he’s changed. Is this legitimate? Does anyone know how to hack a laser pointer?

"This the only legitimate method to successfully claim land on Mars. This isn't like these light-hearted 'own a star' presents people give each other for Christmas. Space law is being eroded and it shouldn't be. I'm not a tree hugger, I want counties to mine space but do it responsibly. The most exciting point for the public is the fact that I now have a technically correct claim to Mars that is filed with the UN." 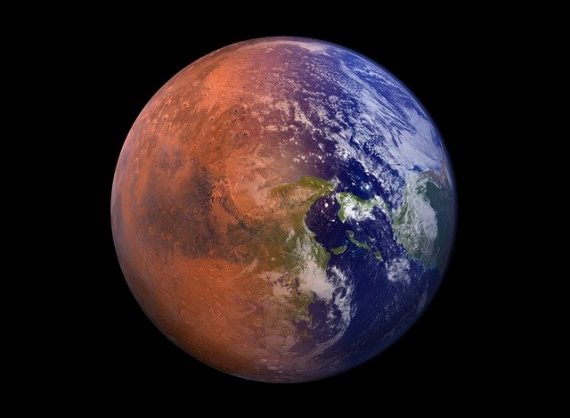 Dr. Philip Davies is a general practitioner from Farnham, Surrey, who for the past ten years has spent his spare time in his backyard with a telescope and the most powerful laser available to the general public -- both pointed at Mars. Every time he fires his 5,000 milliwatt laser, about four minutes later it hits the surface with enough energy left (theoretically, at least) to release microscopic CO2 molecules into the atmosphere, thus changing or terraforming it to something closer to Earth’s atmosphere. While it’s not enough to create climate change on the scale that Elon Musk’s proposed nuclear bombing of the Red Planet would, Davies claims it gives him ownership of Mars under the United Nations Outer Space Treaty of 1967.

“In using solar mirrors or lasers, light and heat can be targeted on the polar regions to liberate CO2 gas from dry ice. Just a three degree temp rise will be enough to create a greenhouse effect ... that might benefit any primitive photosynthetic life which might actually still exist on Mars.”

The treaty is loosely worded and Davies believes he’s found a loophole – it states that land claims can be made for barren or desert-like areas if the claimant can prove they are improving it. Connecting the IF dots, IF his laser is really heating the surface changing the climate above it and IF there’s photosynthetic life forms below it and IF photosynthesis can bring them back to life, the he has indeed improved the planet. Jumping the gun just a bit, Davies has already divided up the planet and is selling Martian land for the incredibly low price of 2 acres for a penny. It’s worth about that much now but could make the owners billionaires when they can sell rights to settlers and mining companies.

“Our goal is to get the Space Faring Nations to ratify an updated Outer Space Treaty via the UN. This Treaty must be space-business friendly but also limit space weaponization & land appropriation. We want UN to allocate a savvy SPACE USER GROUP to administer light ‘trusteeship’ of our Solar System.

Why the need to update the Treaty?.. its the only LAW stopping NUKES in Space, but its being thrown aside ‘cos its bad for Space commerce (mining etc). The treaty tries to stop aggressive weaponization of orbit/space but we now know that major space-faring nations intend to have weapons in space (“peaceful weapons”, just to protect space assets!) within the next 10 years.”

Davies’ “Mars for Sale” website reveals his true cause – to strengthen the Outer Space Treaty to truly keep Mars, the Moon, space and beyond weapon and war-free. He’s filed suits with the High Court, The Court of Appeal and European Court Of Human Rights based on his land claims in hopes that they draw enough attention for force the U.N. and space-faring nations to revise the treaty. Of course, that’s not enough incentive to get backs, so …

“Finally, we seek suitable BIG REWARD [$$$$ or LAND on MARS] for all Planet Mars Land Claimants who support us here in our venture.”

If you haven’t figured it out by now, you can do the same thing Davies is doing with your own high-powered laser pointer and money to hire lawyers to fight for your claims. Who cares about exploration? We want to be billionaires too. To liquidity and beyond!

The Mysterious Sea Monsters of the Orkney Islands