“Psychedelics, used responsibly and with proper caution, would be for psychiatry what the microscope is for biology and medicine or the telescope is for astronomy,” according to the legendary psychiatrist Dr. Stanislav Grof. With that in mind, the recent legalization of psilocybin for use in psychiatric applications in Oregon on November 3rd, 2020 is a historic event, which may have extraordinary implications. This could be the forefront of a psychedelic renaissance that will revolutionize psychiatry, and, possibly, our understanding of reality itself.

Are psilocybin mushrooms the key to curing mental illnesses like PTSD, anorexia nervosa, obsessive compulsive disorder, and clinical depression? This is the question that has been asked by many medical researchers around the world over the last several years.

Most recently, psilocybin has been investigated as a treatment for severe depression that is not improved by antidepressants. The Heffter Research Institute was the first to fund research in this field, and supported early studies at Johns Hopkins University, New York University, and Harbor-UCLA. In the UK, the Medical Research Council backed the proof-of-concept study of psilocybin for treatment-resistant depression at Imperial College London in 2015. Then over roughly the last year, the FDA has twice classified psilocybin treatment as a “breakthrough therapy." This label is meant to expedite the usually lengthy drug development and review process. Breakthrough therapy designation recognizes treatments that address a need that is currently unmet.

However, what Oregonians have done is voted to create the first legal access to supervised psilocybin experiences independent of the FDA drug approval process. Citizens of Washington, D.C. also delivered a landslide vote to decriminalize psychedelic plants on election day, sending a powerful message to the rest of the U.S.

In the future perhaps as little as one dose of psilocybin delivered in a clinical setting, followed by talk therapy, could be effective in curing depression once and for all, rather than managing it on a daily basis with antidepressants. Magic mushrooms might one day help me and nearly 25 million Americans, who take a daily dose of antidepressant, kick their drug habit, something that for many was just a pipe dream. How's that for irony?

Rosalind Watts, a clinical psychologist at the Psychedelic Research Group at Imperial College London, says that with psilocybin treatment, “we saw in 6 hours what you would often see in six years of therapy.” lan Davis, an adjunct assistant professor of psychiatry and behavioral sciences at the Johns Hopkins University School of Medicine, adds, "The magnitude of the effect we saw was about four times larger than what clinical trials have shown for traditional antidepressants on the market."

But how does psilocybin treatment work? The short answer: We don't know. Unlike standard anti-depressants that protect against stressors, but don't get to the root of the problem, psychedelic therapy opens up a therapeutic window in the brain by facilitating insight and emotional release, according to a recent paper.

When asked if there is a natural healing intelligence present in the psilocybin molecule, Watts replied:

I couldn't say, "no" . . . I suppose what psychedelic exploration does do is it shows you how little we understand in some ways . . . [There are these] vast other worlds and this vast symbolism . . . which can be very difficult to decode sometimes . . . we are operating in this one level of experience a lot of the time and there is so much that we don't understand . . . as for the molecule, I just don't know. I kind of love it when people talk about like, you know, asking the mushrooms and the mushrooms talking to them. It's not something I have ever experienced myself, but . . . when people talk about it, it makes me happy because I would love it if that were to be the case . . . We are a part of the web of nature and I would love it if some parts of this amazing web were coming to our aid at this time when we need it . . . In our studies . . . often people feel like they're getting messages from spirit guides, but not so much the mushroom speaking to them directly." 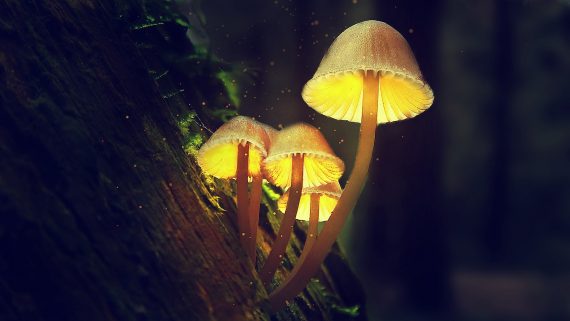 Author and counter-culture guru Terence McKenna had a theory that psilocybin mushrooms were an alien life form that came from outer space.

You know, I, years ago, used to hold the opinion, and still do, in the privacy of my own heart, that this thing could have come from outer space . . . Is it possible that a very sophisticated traveling gene of viral-size inserted itself into this organism for some purpose beyond our ken? . . . The miracle of psilocybin is the hallucinations, the vision, the information. I’m completely convinced that that stuff cannot come from me, and I’m a Jungian. 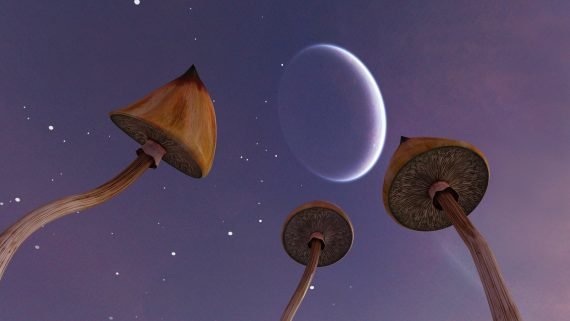 Some evidence suggests that the ceremonial and medicinal use of magic mushrooms dates back 7,000 to 9,000 years. Mushroom ceremonies also have a long history among the native peoples of Mesoamerica who relied on them to facilitate religious communion, divination, and healing.

According Maria Sabina, a Mexican shaman, who introduced aspiring psychedelic explorers to the sacramental use of magic mushrooms in 1957, the enthusiastic hippie hordes who followed destroyed the healing power of the mushrooms. In retrospect, we can see that for awhile, at least, this certainly was the case. The radical Psychedelic era of the 1960s provoked the heavy-handed government response that led to a ban on all psychedelics (even for medical use). As Sabina famously said:

[Before that] nobody took the children [as she referred to them] simply to find God. They were always taken to cure the sick . . . From the moment foreigners arrived, the holy children lost their purity. They lost their force, they ruined them. Henceforth they will no longer work. There is no remedy for it.

In about two years, Oregon will make psilocybin assisted therapy available to all, even those who live out-of-state. Perhaps then we will gain a greater understanding of these psychedelic mysteries. And, hopefully, after more than half a century, Maria Sabina's children will finally find their way back home to us.