Conspiracies, UFOs, and High Strangeness at a Secret Desert Military Base in Australia

Lying practically in the center of Australia, sitting out among the dry and dusty forbidding landscape around 11 miles from the remote desert outpost town of Alice Springs, is the somewhat jarring sight of an installation of squat buildings and satellite dishes ensconced within odd-looking white balls dotting the area, called radomes. Sitting out in this remote, inhospitable land of sun scorched earth as it is, it is easy to conjure up the image that this is a mysterious base on some alien world, but it is in fact a top secret joint American-Australian run military installation officially called the Joint Defence Facility Pine Gap (JDFPG), or more commonly just Pine Gap, also known by its unclassified cover name RAINFALL. Although its official function is to track and monitor satellites, the isolated location out in the middle of nowhere and the complete secrecy surrounding it have made sure that this place has attracted plenty of conspiracies and tales of secret experiments, UFOs, and all manner of strangeness.

The base itself began operations in 1970, established by the U.S. Central Intelligence Agency (CIA), the National Security Agency (NSA), and the U.S. National Reconnaissance Office (NRO) in conjunction with the Australian government. Originally described as a facility for “space research,” its main purpose, or at least what they tell us, is satellite surveillance, its location and remote moonscape of an area perfect for watching vast expanses of the skies, as well as hiding from any spy ships passing in international waters that might try intercept the signals from its array of spherical tracking systems. Since the Cold War it has also been utilized as a missile detection and tracking station, as well as for intercepting and recording weapons and communications signals from hostile nations such as North Korea. The base employs around 1,000 people, sprawls out over at least 20,000 square meters of floor space, and houses a massive expanse of supercomputers and a spider web of tunnels beneath it all, however, its exact layout and the extent of its subterranean facilities are hidden behind a wall of classified top secrecy. Since it is a secret, reclusive desert base completely off limits to outsiders, patrolled by armed security and surrounded by fences generously festooned with “Keep Out” signs, it is perhaps no surprise that over the years strange tales have gravitated towards Pine Gap, ranging from the weird to the totally outlandish.

Perhaps one of the the most well-known, publicized, and plausible stories surrounding the facility is that it has been instrumental in coordinating and carrying out lethal drone strikes in warzones such as Afghanistan, rumors which angered many Australians who did not want to be complicit in illegal targeted strikes and objected to having that blood on their hands. The accusations of Pine Gap being used to coordinate these killer drone strikes have been categorically denied by military officials for years, even though declassified NSA documents have shown that similar facilities, such as Menwith Hill Station in the UK, have indeed been used for launching targeted drone strike missions, so these documents heavily suggest that Pine Gap, with its cutting edge technology, is also used for these purposes. There has been some confirmation in that the NSA has admitted to using Pine Gap for intelligence sharing and for missions concerning the war on terror, whatever that may entail.

Similarly nefarious and unethical are claims made by famed whistleblower Edward Snowden, who has said that Pine Gap is heavily used for intercepting communications not only from enemies of the state, but also from private communications over phone, emails and faxes, essentially allowing the military to eavesdrop and spy on anyone in the world at any time, monitoring everyone at all times. Making this more ominous still is that there have been claimed to be at least two areas of the base that are completely off-limits to Australian personnel. Of course both the governments of Australia and the United States dismiss all of these allegations, but still they persist. After all, that the government would be involved with this will probably be not that big a stretch of the imagination for many, yet this is just the tip of the iceberg when it comes to Pine Gap, and other claims start to veer off into the bizarre. Yes, I’m talking about UFOs and aliens.

Pine Gap has for years been ground zero for all sorts of claims of UFO activity in and around the base. It has gained a reputation as a hotspot of UFO sightings, and has even gained the reputation as "Australia's Area 51," furthering its cred as a decidedly oddball place. One strange type of report that has popped up frequently is that of all the hidden camouflaged doors in the surrounding area of the base that strange flying craft come and go through. In as early as 1980 there was a report from two police officers that were in the vicinity helping with a search for a missing child, combing through the desert scrub when right in front of them a door opened in the ground to disgorge several bizarre craft described as “flying bathtubs.” These mysterious objects then flew across the base to enter some sort of portal that appeared in the hills not far away, after which it and the craft vanished. A similar report occurred in 1989, when three hunters saw a hidden door open in the hillside they were on, from which emerged a large metallic gray disc. The door then closed to blend perfectly into the environment as if it never existed. This flying object then reportedly silently flew out across the base to hover right above it before shooting straight up in the sky at breathtaking speed. 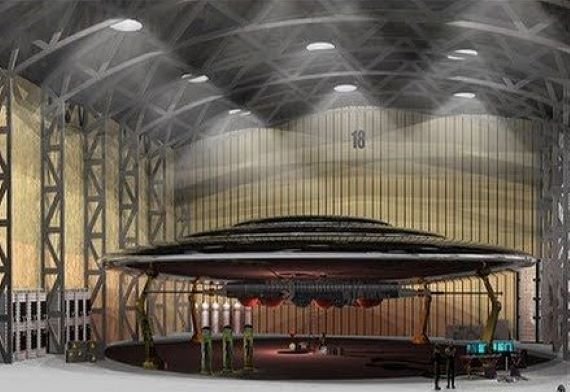 Other strange UFO activity has been reported from the base as well. Back in 1975 the pilot and passengers of a private plane flying not far from Pine Gap witnessed a huge white light take off from the base and shoot off into the distance at speeds far exceeding a normal aircraft. Interestingly, when they tried to file a report of the sighting they were told in no uncertain terms to forget what they had seen. Perhaps even stranger than this was an incident that supposedly happened in 1984, when a group of five UFO watchers were staking out the area after apparently receiving an anonymous tip that something big was going to go down at the base, and it seems they would not be disappointed. They claim that there was a sudden flurry of activity by personnel at the base, after which a beam of light shot into the sky and formed some sort of cloud-like portal, from which flew five UFOs that flew around the base shooting down green pillars of light at the domed radomes for several minutes before entering the cloud again and vanishing into thin air. There have indeed been numerous other reports of UFOs hovering over the radomes, and these domed radar installations seem to be of particular interest to these mystery craft.

The mention of the portal in this case fits in very well with some of the other off-the-wall conspiracies about the Pine Gap base. It has long been rumored that among the many secret experiments allegedly carried out at the base are those concerned with opening up doorways to other planets and even other dimensions. Other experiments said to happen at the base are those involving time travel, teleportation, reverse engineering alien technology, controlling the weather, and creating super soldiers. You name it, there has probably been a conspiracy claiming that it is an experiment being carried out at Pine Gap. It is hard to know just how many of these rumors are true and how much of it is just conspiracy theory nonsense, but considering that it is such a top secret place that no one can get near, out in the middle of a forsaken wasteland, it is not hard to see why it has managed to attract so much weirdness. What is with this place? We will perhaps never know what really goes on there, but as long as something is going on there the stories will likely continue to swirl, and if you want tales of UFOs, weird experiments, and high strangeness, you can do worse than Pine Gap.