Irish farmer Donal Bohane used to enjoy farming his land in Coolnagurrane, which is located at the edge of Skibbereen, a town in Cork County on the southwestern tip of Ireland. Then strange, disastrous and seemingly unlucky things began to happen. He grew maize on the land and in most Augusts the crop was 11 feet tall. He also grazed cattle on the land, fattening them up to be sold. However, in 2017, Bohane noticed something strange – his cows got thin and began walking backwards … a malady traced to a fungus parasite, but only diagnosed after years of frustration. In August of 2020, just has his maize was about ready to harvest, a severe rain caused flooding that completely wiped out his crops, costing him €1,000 ($1182) per acre. This was not the first time his land had been flooded, but it was the worst. Bohane couldn’t understand why his life had suddenly taken such and unlucky turn. Then, he remembered something.

“A bull of mine used to itch themselves up against the stone and one day it just toppled over. I looked back and everything traces back to that incident about 10 years ago.”

The one-ton “stone” Bohane described to The Irish Examiner was a standing stone – one of those Bronze Age monuments placed on end across the United Kingdom that were used for sacred ceremonies, burial ground markers and other still unknown purposes. Like most people in the UK, he knows they should not be disturbed – both for heritage reasons and because of their alleged magical powers. Could a bull knocking down a standing stone be the cause of his run of bad luck? Could standing it back up change it?

“I wanted to do it myself but I wanted someone else there to make sure I did it right. I contacted UCC and I contacted a lot of people. You hear a lot of stories about these kind of things, and there is also a small ring fort nearby.”

At University College Cork (UCC), Bohane talked to UCC folklore expert Dr. Jenny Butler, who suggested he call in some druids … and it just so happened she knew the right druids for the job – Jan and Karren Tetteroo, married druids from Kerry. The Tetteroos are members of the Grove of Anu, which is a local grove of the Order of Bards, Ovates and Druids – a worldwide order dedicated to the practice of the druidic path and service to the community. They knew exactly what to do.

“The spot where it stands is aligned roughly with the location of the fort and is part of an ancient road from that fort. In our ceremony we addressed the unseen people who live in the fort and said what we were going to do and we also used water from our holy well.” 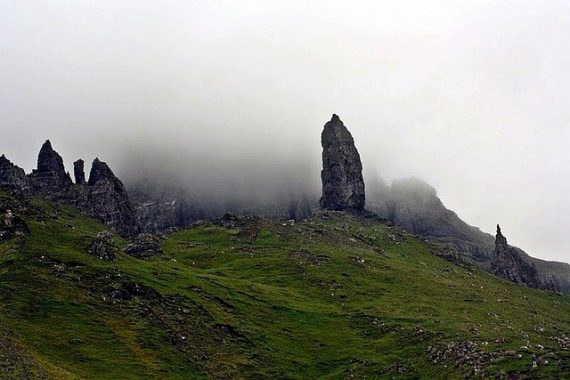 Once the spirits were appeased by the ceremony, the Tetteroos got physical – a backhoe was used to stand the standing stone back up again. With that, they hoped the spirit road or energy line was cleared, allowing the cattle to use the field without consequences and hopefully stop the flooding. (Dohane is still blaming the local flood defense system, but he’ll take any help he can get.)

“The entire ritual took about two hours and as it ended the sun broke through the clouds, which was taken to be a good sign by all those assembled.”

Wonder if the Tetteroos can find the stone that fell over and caused 2020.

Strange Creatures That Have the Power to Create Terror