Sprawled out over a remote and rugged area of the Santa Ana Mountains of Orange County, California is a place called Black Star Canyon. It is a place full of craggy valleys, boulder-strewn gullies, winding trails through forests and tangled, perilous terrain, yet it has become a popular destination for hiking, mountain biking, and horseback riding, drawing in people from all over the state and beyond. Here one can meander over miles of pristine trails, the whole of it roamed by snakes, tarantulas, and mountain lions. What many of the people who come here don’t realize is that beneath the rugged beauty of the area there is a dark history lurking, which has fueled all manner of tales of the paranormal that have served to make this one of the strangest paranormal locations in California.

Black Star Canyon has an interesting story behind it. It was originally inhabited by the Native Tongva-Gabrieliño people, who left artifacts and remains of their settlements behind, and it is with these people that one of the earlier dark accounts of Black Star Canyon originates. Here it is said there was once a bloody battle carried out between the Tongva and fur trappers led by a man called William Wolfskill. It began with the Natives stealing horses and cattle from ranchers in the area, something against which the ranchers had little defense at the time. It was only when the hardened and well-armed fur trappers arrived that they could finally fight back, with the ranchers making a deal with the trappers to hunt the thieves down, and so in 1831 a group of trappers headed out to confront the perpetrators. By all accounts it was an absolute massacre, with the trappers’ long rifles and expert marksmanship making quick work of the small, bow and arrow wielding group of Tongva, and according to reports not a single trapper fell in the one-sided “battle.”

In later years, the canyon fell under Mexican rule, where it was known as Cañon de los Indios, and it became known for its vast coal deposits. The Black Star Coal Mining Company was founded here in 1879, from where the canyon now gets its name, and various mines were dug into the canyon, the evidence of which can still be seen today, including rusted, decrepit mining equipment, abandoned shafts, and forgotten piles of coal. During its mining days the canyon had another taste of blood, as the operation was very unsafe by today’s standards and an untold number of coal miners died here in collapses and other deadly mining accidents. In 1899 there was yet another grim tale, when a ranching dispute devolved into a gunfight that ended with the death of rancher James Gregg at the hands of two brothers named Thomas and Henry Hungerford, who owned the nearby Rancho Escondido. In more modern times there have been countless deadly crashes on the extremely dark and twisting unmaintained road that meanders through the area, as well as fatal accidents involving hikers not prepared for the harrowing terrain, and there have been mysterious disappearances here as well. Additionally, there are numerous unconfirmed reports of  being shot by squatters who put up bogus “No Trespassing” and “Private Property” signs, despite the fact that the land is public. In the 1980s there were also plenty of reports of Satanic rituals being carried out in the dim wilderness here. Considering all of this, it is perhaps not surprising that there would be spooky ghost stories from Black Star Canyon, and there are plenty of them. 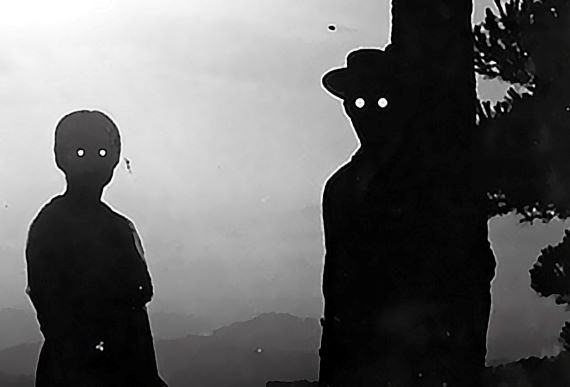 One of the more commonly reported paranormal phenomena from here is seeing the apparitions of Native Americans, Spanish Conquistadors, and old timey miners wandering about the area, as well as lesser defined shadow figures said to merely stare down from craggy cliffs above and which have been likened to the “Dark Watchers.” People will also report being followed by dwarfs in hooded cloaks or mysterious orbs of light, or of seeing strange glows from the treetops. There are also numerous reports of disembodied voices, footsteps, tribal drums, screams, howls, and other spooky anomalous sounds out along the trails at night. Even more ominous is a demonic beastly figure said to prowl a popular 2.5 mile hiking and biking trail in the area, and the so-called “Black Star Demon” is supposedly known to be very aggressive and violent, pushing, clawing, and biting the unwary, and its growling voice has purportedly been picked up in EVP sessions carried out by paranormal investigators. On top of all of this are other phenomena such as Bigfoot sightings, and the area is also considered a UFO hotspot. Chris August, of OC Ghost and Legends Tours, which organizes a ghost walk along the trails of the canyon, has said of all of this:

Black Star Canyon is a paranormal grab bag. We see everything you can imagine out here. Black Star is a triple threat, outside of ghosts, there are report of possible Sasquatch sightings in the national forest. In the early morning hours, we've also spotted weird things in the sky. 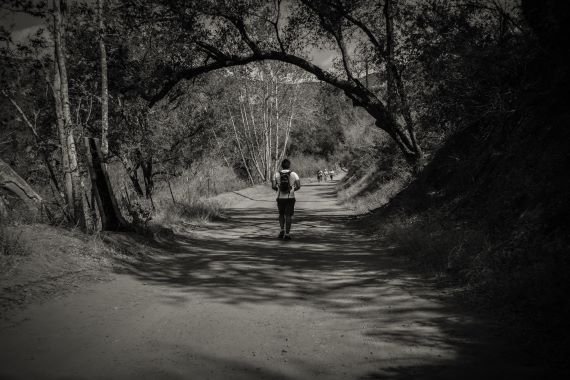 It remains uncertain how much any of this is real and how much of it is just spooky urban legends and campfire stories that have sprung up around an undeniably creepy place. What are we to make of such tales, and if there is anything to this all what does it signify and why are these things drawn to this place. Black Star Canyon is open to hiking and has ghost tours that run through it for the truly adventurous, so maybe the best way to find out is to go and check it out for yourself. Just keep an eye on the shadows.