Jupiter and Saturn Will Provide a Sky Treat This Christmas Season

The two biggest planets in our Solar System will provide us with a beautiful sky treat this Christmas season. While the conjunction will happen from December 16th to the 25th, Jupiter and Saturn will be the closest they’ve been to each other in almost 800 years on December 21st.

This event will be visible worldwide with the best views from the equator. The two planets will appear in the western sky close to the horizon around the time that the sun sets. Those who live in the north, however, will have a much shorter time frame to see the conjunction before the planets disappear below the horizon. Patrick Hartigan, who is an astronomer from Rice University of Houston, Texas, noted, “Viewing that would be manageable if the weather cooperates and you have an unobstructed view to the southwest.” 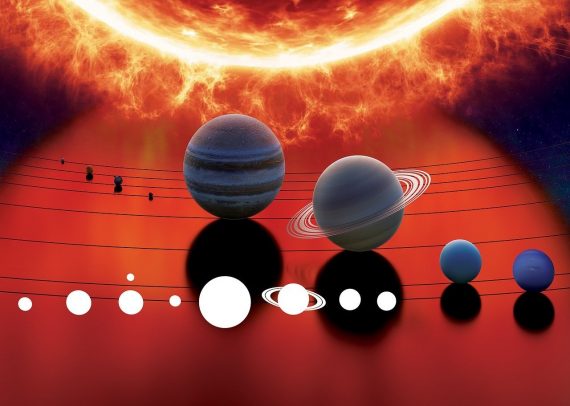 Since this summer, Jupiter and Saturn have been moving closer to each other, and on the winter solstice (December 21st) they will appear less than a full moon’s width apart from one another.

Hartigan explained what will happen during this upcoming sky show, “On the evening of closest approach on Dec 21 they will look like a double planet, separated by only 1/5th the diameter of the full moon,” adding, “For most telescope viewers, each planet and several of their largest moons will be visible in the same field of view that evening.”

The two planets won’t appear next to each other at this close of a range until 60 years from now on March 15, 2080 when they will be visible higher up in the sky and for a longer length of time. Then it won’t happen again until after the year 2400.

Hartigan went on to explain just how unique this sky show will be, “Alignments between these two planets are rather rare, occurring once every 20 years or so.” “But this conjunction is exceptionally rare because of how close the planets will appear to one another.” “You’d have to go all the way back to just before dawn on March 4, 1226, to see a closer alignment between these objects visible in the night sky.”

Since this event will not happen again for another 60 years, you may want to head outside on December 21st to see this pretty holiday show.