More on the Matter of the Loch Ness Giant Salamander

My most recent article was titled "The Loch Ness Monsters: News on the Giant Salamander Theory." In that same article I stated: "Over at his blog, Nessie authority Roland Watson has a fascinating story that is focused on the theory that the Loch Ness Monsters may be giant salamanders. It should be noted that the salamander angle is not a new one, but the account that Roland shares with us is." Roland wrote: "I received a message from another Nessie fan, Paolo Boccuccia, about a story he heard back in 1983. This was Paolo's second visit to the loch in four years and he wanted to ask various local people who were older whether they had seen the monster. One lady, who Paolo thinks was a Mrs. McKenzie claimed to have had a land sighting back in the summer of 1922 near Borlum Bay." I also noted in the same article above that Steve Plambeck has done a great job of addressing the matter of the Nessies potentially being salamanders of a giant size. Today, I thought I would expand on this theory and share with you the words of those in the field who are no longer with us, but who dug into the matter of the salamander debate. Interestingly, and in decades long gone, very few were overly enthusiastic about the salamander theory. We'll begin with Rupert T. Gould, the author of The Loch Ness Monster and Others, published way back in 1934.

Gould said in his book, referring to the creature as "X": "The suggestion that X might be some species of giant salamander 'indigenous to Loch Ness and its rivers' was made by Lt.-Col. W. H. Lane, in a letter to the Inverness Courier. While pointing out that the largest living variety is a native of Japan (although specimens had also been obtained in China), he stated that he had shot what he believed to be a creature of the kind in the Chin Hills district of Burma. There are, unfortunately, many objections to this theory. In the first place, the existing giant salamanders do not, so far as is known, exceed 6 feet in length; nor has any fossil specimen been found of more than twice this length. It is difficult to understand why an amphibian, capable of spreading over the whole of the British Isles, should confine itself exclusively to the Loch region; and the entire absence of remains tell very strongly against the supposition that it is indigenous."

Of course, Gould could have noted (but didn't note) that the creatures were not tied to "the Loch region." In fact, there are a number of additional Scottish lochs that have monster tales attached to them. Also, salamanders can walk on land - something that is important when it comes to the many and varied land-based sightings that have occurred at Loch Ness. Steve Plambeck has also demonstrated that salamanders are not restricted to Japan and China (there's also a U.S. salamander too: the Hellbender). Moving on, the late Roy P. Mackal also addressed the matter of giant salamanders in his 1976 book, The Monsters of Loch Ness. He said:

"In considering amphibians, size is a more serious problem, perhaps the most serious problem with the amphibian hypothesis. Most living amphibians are small, the largest being the giant salamanders (megalobatrachus) of Japan and China, reaching 5 1/2 ft. in length and weighing up tp 100 lbs. The hypothesis fares better when incorporating fossil forms, since larger sizes are indeed recorded among the extinct animals - e.g., labyrinthodonta: Eogyrinus (15 ft. length), Icthyerpeton bradyleyae (discovered in Jarrow Coal Measures of Kilkenny, Ireland), Parocyclotosaurus davidi (11 ft. with 3-ft.-long skull), Mastodonsaurus (16 ft. with 4-ft. skull); however, these latter three giants were mostly head, thus making their morphology unconforming to the Loch Ness data." 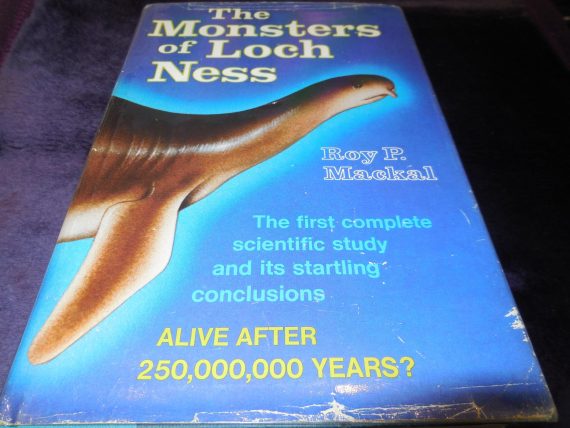 On top of that, a true cryptozoological legend, Bernard Heuvelmans, doubted the salamander theory, too. In other words, back in the day there really wasn't much support for the Nessies-are-salamanders angle. Of course, now, there is far more tolerance for the salamander scenario - as Steve Plambeck's excellent work demonstrates.