Mysteries and Giants at the Serpent Mound of Ohio

Lying out in rural Adams County, Ohio, in the United States, upon a plateau overlooking Brush Creek, is a curious mound of earth jutting out of the land, winding about in the unmistakable image of a snake for a full 1348 feet and averaging 3.9 to 4.9 feet in height, and it comes complete with an open-mouthed head and coiled tail, earning it its nickname “The Serpent Mound.” It is what is called an “effigy mound,” a type of earthen mound created in the shape of an animal, and it is the largest known such mound in the world, made all the more mysterious in that it curiously lies along the impact crater of some ancient meteor strike. First excavated in the late 1800s, we know no more about it now than we did then, its origins and purpose unclear, and so the Serpent Mound has managed to attract many mysterious stories to it, one of these being all of the giant skeletons that have apparently been found there.

While the exact origins and age of the mound are somewhat shrouded in mystery, the Serpent Mound is generally accepted to have been built by what is now called the Early Woodland Adena culture, which existed in the area from between 500 B.C. to 200 A.D., with the structure most likely dating to about 300 B.C., but the reasons for its existence have been debated. One idea is that it was created for some sort of mortuary purposes, as although the mound itself does not contain any remains, there are numerous smaller burial mounds peppering the area around it. It is thought that the serpent might have been constructed as a sort of protector of the graves or a beacon to guide lost spirits. This makes sense, as serpents and snakes were often depicted by the Native peoples as having magical or supernatural powers, and were seen as revered animals. Another idea is that it was for some sort of cosmological or astrological use, supported by the fact that the head and the tail of the serpent just happen to align very well with the summer solstice sunset and the winter solstice sunrise, as well as to yearly equinoxes. Another idea put forward by researcher Ross Hamilton in his book Star Mounds: Legacy of a Native American Mystery is that the Serpent Mound is merely one part of a larger “terrestrial zodiac,” linking together with other mounds across the country. However, no one is sure, and the mound remains quite a mystery.

Adding to this is that the location on an impact crater has turned up various gravitational and magnetic anomalies in the area, leading to speculation that the construction was intentionally made here for this reason, and there have long been stories of freak weather patterns and anomalous lights in the area. The Serpent Mound has gone on to be known for UFO sightings and other weirdness, but perhaps the strangest thing here are the instances in which the remains of what appear to be actual giants, individuals allegedly measuring between 7 and 9 feet tall. One such report appears in 1872 in Historical Collections of Noble County Ohio, in which there were stumbled across some strange remains, which would be described:

The remains of three skeletons whose size would indicate they measured in life at least eight feet in height. The remarkable feature of these remains was they had double teeth in front, as well as in back of the mouth and in both upper and lower jaws. Upon exposure to the atmosphere the skeletons crumbled back to mother earth.

This is far from the only such report made from the vicinity of the Serpent Mound, and another was given in 1891 by American anthropologist and professor Frederic Ward Putnam, who was doing a study and excavation of one of the outlying burial mounds when he came across a skeleton of a relatively smaller size, standing at only 6 feet, but this would have been towering in ancient times, and it was also remarkable for its bizarre dental structure, which seems to have featured a double row of teeth. Putnam would write:

Several peculiarities of this skeleton are worthy of notice. It was that of a well-developed man…and probably about 25 or 30 years of age, he never had any wisdom teeth, and a search in the maxillary bone of one side showed that there was no wisdom tooth forming in the jaw. With this exception, he had a fine set of teeth, and still embedded in the premaxillary bone is a partly formed left incisor tooth. No corresponding formation can be seen on the opposite side of the suture, and this is probably a super-numerary tooth, although the small size of the lateral incisors is suggestive of their being persistent first teeth. As is often the case in skulls of this race, the crowns of the incisors are distinctly folded. 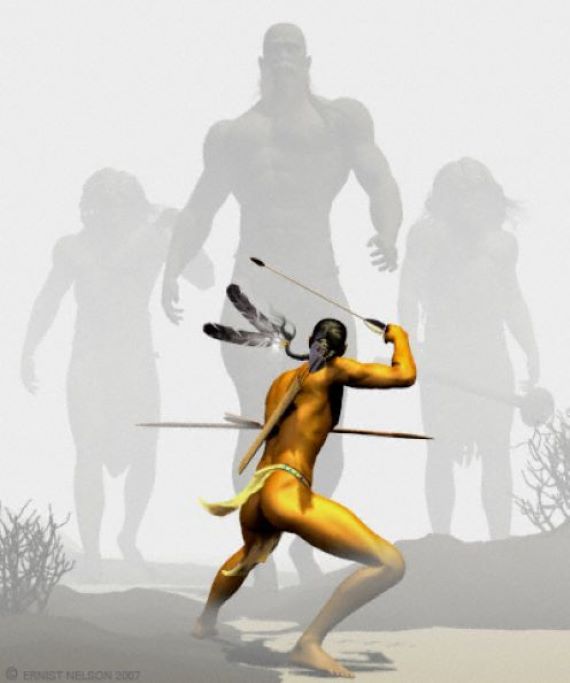 Putnam would surmise that this had been merely an adolescent, and that it would have achieved far greater size if it had not died. Putnam would allegedly discover several other skeletons in the area measuring 7 feet tall or taller, and with skulls that were “twice the usual thickness.” In 1894 a local farmer by the name of Warren Cowen also happened across some unusual graves, and an article at the time in The New York Times says of this:

Farmer Warren Cowen of Hilsborough, Ohio, while fox hunting recently discovered several ancient graves. They were situated upon a high point of land in Highland County, Ohio, about a mile from the famous Serpent Mound, where Prof. Putnam of Harvard made interesting discoveries. As soon as the weather permitted, Cowen excavated several of these graves. The graves were made of large limestone slabs, two and a half to three feet in length and a foot wide. These were set on edge about a foot apart. Similar slabs covered the graves. A single one somewhat larger was at the head and another at the foot. The top of the grave was two feet below the present surface.

Upon opening one of the graves a skeleton of upwards of six feet was brought to light. There were a number of stone hatchets, beads, and ornaments of peculiar workmanship near the right arm. Several large flint spear and arrow heads among the ribs gave evidence that the warrior had died in battle. In another grave was the skeleton of a man equally large... Several pipes and pendants were near the shoulders. In other graves, Cowen made equally interesting finds. It seems that the region was populated by a fairly intelligent people, and that the serpent mound was an object of worship. Near the graves is a large field in which broken implements, fragments of pottery, and burned stones give evidence of a prehistoric village.

There would apparently be made at least 17 reports listed in Smithsonian ethnology reports of outsized remains of 7 feet and over found in mounds surrounding Serpent Mound, and it has led to speculation that some race of giant individuals may have called this place at home and been closely in league with the Natives of the area. What are we to think of all of this? It is all certainly a mysterious place, but are there mysteries here that are even stranger than most? What are are we to make of the reports of giant-sized people living here, and is there anything to such reports at all? The mystery remains, and the Serpent Mound of Ohio is certainly an inscrutable feature of the landscape here.

Black Eyed Children, M.I.B. and Women in Black: Do They Have a Certain Medical Condition?