The Japanese town of Takikawa, on the northern island of Hokkaido, recently deployed two bad-tempered wolf robots to scare away bears. Bears sightings in rural areas of western and northern Japan have been on the increase. In 2019, bears attacked 157 people in Japan, killing one. In 2020, the attacks have continued, resulting in two fatalities already this year. Conservationists say that bears are encroaching on populated areas because of a shortage of acorns and other food staples in their usual habitats. In other words, they're hungry and getting desperate.

The tense situation has triggered memories of the winter of 1915, when Hokkaido was also the scene of arguably the deadliest bear attack in recorded history. The Sankebetsu Incident, as it became known, was perpetrated by a single bear. The 8.85 ft., 749 lb., Ussuri brown bear, who was supposed to be hibernating, awakened early, and over a two-day period in December, massacred 7 villagers.

With that monster bear in mind, the robotic wolf deterrents better be scary. The wolf-bots were initially enlisted in 2016 to protect livestock. Now more than 62 monster wolves have been installed across all of Japan. However, the latest installation in Takikawa is the first intended to protect humans. The menacing electronic guardians resemble large wolves with red, glowing eyes. Motion detectors trigger growling, howling, threatening head movement, and flashing lights. Hopefully, it will be enough to prevent future bear attacks. 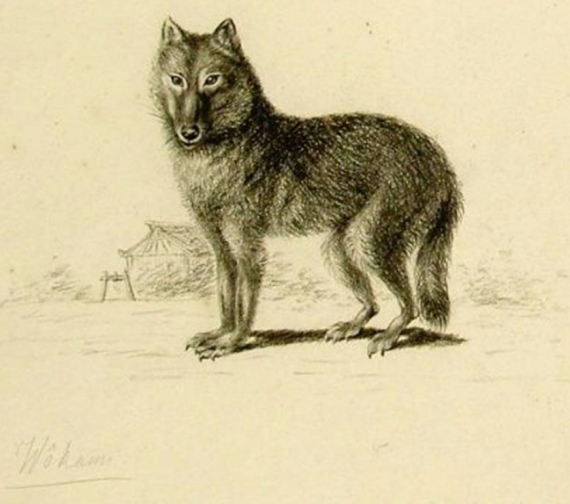 Legend has it, that two, now officially extinct, Japanese wolf species once did a similar job. The Honshū wolf (Canis lupis hodophylax) is said to have become extinct in 1905 due to hunting and a rabies epidemic. The Japanese wolf memorial, a life-size bronze statue, stands on the site in rural Higashiyoshino, Nara, where the last known Honshū wolf was killed by hunters. The last of the Ezo wolves of the the northernmost island of Hokkaido (Canis lupis hattai) were exterminated by hunters and bait poisoned with strychnine, as part of the establishment of American style cattle ranching in Japan in 1889.

Like the Tasmanian Tiger (or Tasmanian Wolf as it is also known, at least in Howling III), Japanese wolves may still survive in the remotest wilderness of Japan. As you might expect, these areas of suitable habitat are precisely where people still report sightings.

Wolf sightings in wilderness areas increased dramatically during WWII, suggesting that perhaps reduced human encroachment and hunting, which caused wildlife populations in general to rise, had also led to a resurgence of wolves. However, even more recent sightings have been reported. During the first Japanese Wolf Forum, a two-symposium in 1994, 70 people testified that they had either recently seen a wolf themselves or heard wolf howls. Samples of wolf feces, distinctive because it contains clumps of matted hair from prey animals, was also presented. In 1997, several photos of a purported wolf surfaced in the mountain district of Chichibu. In November 2000, yet another possible wolf photo was taken on a mountain in Kyushu. A few new sightings were recorded as recently as 2019. Currently, 70 motion-sensitive infrared camera traps are deployed in the Okuchichibu Mountains awaiting evidence to prove the continued existence of Japanese wolves.

Whether or not a remnant population of the Japanese Wolf still exists, it lives on in Japanese folklore. Unlike their European counterparts, for most of Japanese history, prior to Western influence, Japanese wolves enjoyed elite status as divine emissaries of the mountain spirit and, surprisingly, village protectors. Whereas the European wolf was reviled as a personification of evil, through the ages in Japan, the wolf was treated as a sacred creature. 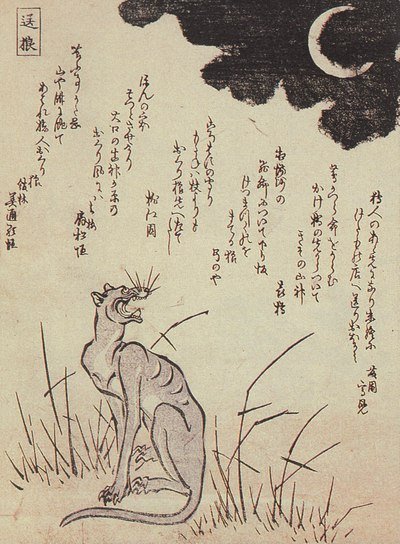 Cryptozoologist Karl Shuker, maintains that the Ainu, Japan’s aboriginal people referred to the Honshū wolf as the howling god. Other sources contend that the Ainu also viewed wolves as their ancestors. Wolves are still revered at numerous Shinto shrines throughout the country. According to folklorist John Knight in his paper On The Extinction of the Japanese Wolf, even the scientific name of the Honshū wolf (Canis lupis hodophylax), derives from Yokai legends of the okuri-ōkami, collectively known as sending wolf stories, which tell of a wolf-like spirit, who escorts lone travelers through the mountains, keeping would-be predators at bay. The epithet hodophylax in Canis lupis hodophylax translates as guardian of the way.

Although there are more nefarious versions, where the wolf ruthlessly attacks his charge as soon as the opportunity presents itself, these are possibly later revisions due to Western influence. Traditionally, the okuri-ōkami's presence neutralized the many threats faced by the nocturnal wayfarer, who he then delivered safely home. The word ōkami itself translates as good animal.

The okuri-ōkami legend is only one example of how the wolf, seen as the watchdog of the mountains, was thought to protect the vulnerable. As in other cultures, there are also stories that tell of wolves protecting children. A court nobleman's lost infant is said to have been raised by wolves in the Kii mountains. Another legend involves a starving man who offers his body to a wolf. Instead of eating him, the wolf grants this poor, but humble man good fortune. Wolves are also credited with warning humanity of impending disaster. Wolves are said to have howled continuously on the eve of a great flood in 1889, which devastated the town of Hongū and claimed many lives. The wolf in these stories is a powerful ally, who protects humanity from the cruelty of nature.

In former times, when wolves were killed in Japan, the perpetrator would hide his identity to escape spiritual retribution. There are stories of unmasked wolf killers who suffered great misfortune, from sudden deaths in the family to lost personal wealth and property. Even today, the death of the last recorded Honshū wolf in 1905 is commemorated by a solemn, annual ceremony in the local community where the wolf was killed.

In leiu of the resurrection of ancient gods or the invocation of enigmatic yokai, some are working toward restoring balance to the environment with a more comprehensive and long-lasting solution than robotic wolves. The Japan Wolf Association seeks to reintroduce European wolves, a close cousin of the Ezo wolf, to Japanese forests. Only time will tell if this effort will succeed and appease the mountain spirits and the Japanese people alike.