When is eating the flesh of humans not cannibalism? According to scientists at a company specializing in regenerative medicine and developing biomaterial for spinal cord treatments, it’s not cannibalism if the ‘steaks’ are grown from the consumer’s own cells at home … and the see this as a way to reduce the consumption of animal flesh and all of the environmental and health issues associated with it. Before you dismiss this as some futuristic dystopian fantasy, these human ‘steaks’ have a ‘brand name’ – Ourboros Steak – and prototypes are on display at a museum in London. Yikes!

“A group of American scientists and designers have developed a concept for a grow-your-own steak kit using human cells and blood to question the ethics of the cultured meat industry. Ouroboros Steak could be grown by the diner at home using their own cells, which are harvested from the inside of their cheek and fed serum derived from expired, donated blood.”

In a press release for the annual Beazley Designs of the Year awards organized by London's Design Museum, scientist Andrew Pelling, founder of the Ottowa biotech firm Spiderwort, industrial designer Grace Knight and artist and researcher Orkan Telhan unveiled a display of amuse-bouche (bite-sized hors d'œuvre)-sized Ourboros Steak on display either preserved in resin in small cups or lost on traditional-sized plates on a table. You may recognize the term “Ourboros” – it’s an ancient symbol depicting a serpent or dragon eating its own tail … an appropriate name for eating steaks grown from one’s own cells.

"Expired human blood is a waste material in the medical system and is cheaper and more sustainable than FBS, but culturally less-accepted. People think that eating oneself is cannibalism, which technically this is not."

Grace Knight tries to reduce the ‘Ewww!’ factor by pointing out that lab-grown meat uses fetal bovine serum (FBS) – an expensive protein-rich growth supplement derived from the blood of calf fetuses after their pregnant mothers are slaughtered by the meat or dairy industry. The team sees growing Ourboros Steaks as do-it-yourself project – not-cannibals will be able to buy a DIY kit containing swabs for collecting cheek cells, pre-grown scaffolds made from mushroom mycelium for growing them, human serum for feeding them and instructions on the proper temperature for growing them (like a warm oven) for three months until you have your tray of human amuse-bouche. 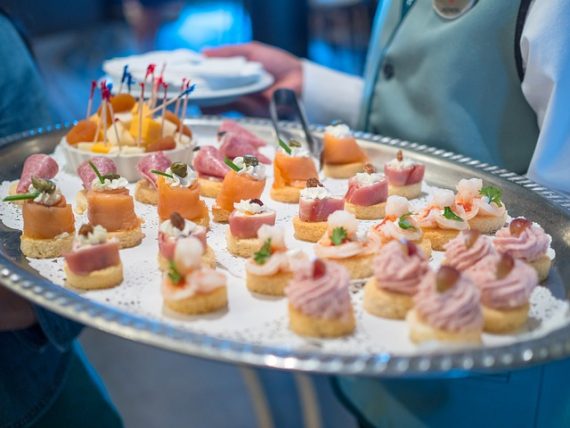 Before you run out searching for a kit (growing your own meat from your own self sounds like the perfect stuck-at-home-by-the-pandemic project), no lab-grown meat has been approved for sale anywhere, but it’s bound to happen soon since the market is expected to be worth $572 million by 2025.

Would you try lab-grown human meat? Would you try it if it was grown from your own cells? In your own home by you? The ethical questions are overwhelming, the “Ewww!” factor enormous … yet here we are talking about it and there is the London Design Museum considering it for a design award. Is this a sign that it’s inevitable?