The Bizarre Case of a UFO Attack in the Everglades

Of all the myriad reports of UFOs and alien encounters out there, perhaps the most spectacular are those that involve these mysterious entities reaching out in an aggressive manner to attack human beings. Such cases go beyond the image of benevolent alien entities, and serve to act as something more along the lines of a horror movie, yet there are more accounts like this than many might think. One of these played out in the swamps of Florida, and here we have a strange case of a witness who apparently found himself on the wrong end of otherworldly forces.

The setting for this outlandish tale is the Everglades, a vast expanse of swamps and tropical wetlands covering a massive 7,800 square miles of the southern portion of the U.S. state of Florida. It was to this wild realm of gloomy tangled, mosquito infested wilderness that on March 12, 1965, a rancher and former constable by the name of James Flynn came to do a bit of hunting. He loaded up his truck with a swamp buggy and his four trusty hunting dogs, before making his way through winding dirt roads as far as they would take him, until he was right up against the swampy wilds. He then unloaded the swamp buggy, let his dogs loose, and penetrated deeper into the muck covered back country in search of deer. The terrain was very daunting and unpredictable, but by all accounts Flynn knew these swamps like the back of his hand and was a seasoned outdoorsman, so this was all pretty routine for him. However, the trip was about to take a turn into the weird.

Flynn camped out there for several days, which were fairly uneventful until the early hours of March 14, when at around 1 AM his dogs picked up the scent of something out in the dark and went darting off into the murky night barking, snarling and yipping excitedly. Flynn watched them run off, but was startled when several minutes later he heard a booming sound reverberate through the trees and mangroves, sounding very much like a gunshot. This was followed by one of the hunting dogs bolting back to the camp whining and with its tail between his legs, and the concerned Flynn decided to get into his buggy and investigate. His first thought was that his dogs had come across another hunter out there, and that they had possibly been shot, so he sped off towards where the sound had come from. The vegetation was dark and thick, making it very slow going, but he finally saw something up ahead through the brush, which would turn out to be far more bizarre than anything he could have imagined.

Something ahead was shining very brightly, but at first he could not make out what it was through the canopy of the trees. The light moved off some distance, then returned to its to its original spot and descended down into a clearing among some cypress trees. At this point, Flynn still did not really register this as an alien craft, and when he got off of his buggy to approach on foot he was under the impression that it was possibly a helicopter or even an experimental craft from the nearby Cape Kennedy base that was in trouble. His plan was to go offer help, but as he approached he got a good look at it through his binoculars and could see that it was no normal aircraft. There, hovering just a few feet off of the ground, was a massive, brightly lit object that looked like an inverted cone, measuring around 100 feet in diameter at its base and around 30 feet high. It looked to be made of some sort of smooth, shiny metallic material, and around its body were four tiers of windows that seemed to be lit from within with an eerie yellow glow.

Despite his awed shock, Flynn continued approaching through the brush, mesmerized by the bizarre sight of this strange machine in the middle of the swamp. He was aware of a whirring noise like a “diesel generator” but it was not nearly as noisy as such a huge flying craft would be expected to be. Nevertheless, the dog that he had in its cage back at the buggy was going nuts, barking and snarling like mad. Flynn got within around 200 feet of the otherworldly craft, upon which there was a sudden whine like a jet engine, followed by a gust of wind that practically knocked him off his feet. Several moments later, he saw the craft emit a bright beam like a “welder’s torch,” which hit him in the center of his forehead “like a sledgehammer.” After this there was nothing but blackness. 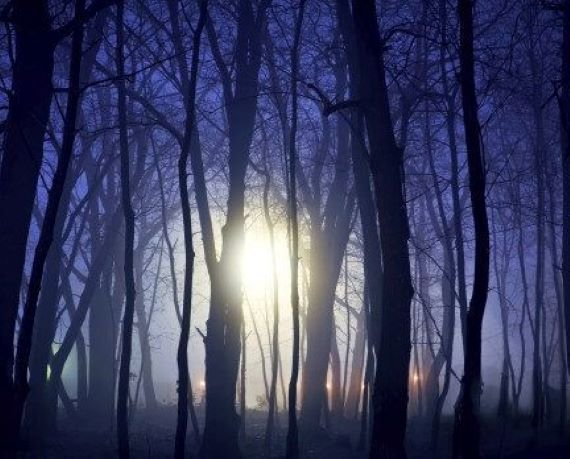 The next thing Flynn remembers is waking up in the rays of the morning light, but his vision was blurry and his surroundings indistinct. He got up and stumbled about, finally recognizing his location as where he had been when he lost consciousness, and he could see through his cracked vision that where the UFO had been there was now a black patch of scorched brush. He then managed to make his way back to his camp, where his other dogs had been waiting for him, and then went to the home of a Seminole friend of his, who got him to a hospital at Fort Myers. The doctors found the man had eyes that were bloodshot and red, as if they had burst blood vessels, and there was an ugly bruise in the center of his forehead. An examination showed that there was also numbness and partial hearing loss, as well as some muscular reflex impairment, but there was no serious injury, and he was then discharged and expected to fully recover. During his stay at the hospital, he excitedly told of what had happened to him, and although his ophthalmologist was skeptical, he would nevertheless vouch for the man’s reputation as an honest, down to earth person not prone to wild imaginings. A Dr. Paul R. Brown would say of his impressions of Flynn’s story:

I first examined Mr. Flynn on March 17, 1965. He stated that while he was out hunting in the woods in this area two days before I saw him he noticed an unnatural light in the woods off in the distance. He stated that he went closer to the light to observe it and suddenly he was struck by “something from a space ship”. He said that he was knocked out and blinded. He said he recovered some sight in the left eye but he could not see out of his right eye. Mrs. Flynn accompanied him into my office, and Mr. Flynn seemed to be in quite an agitated state of mind at that particular time. He kept repeating over and over “I know you wont believe me, but this is what happened” and then he would begin to relate the same story.

As best as I can tell, Mr. Flynn appears to be a rather stable individual. He is not considered to be a person who likes to make up wild tales. Although his story could be a cover-up story for some other type of incident, I feel that this is quite unlikely since a more plausible story could have been thought up to cover up for him should he have felt the need for such cover-up. Since the incident Mr. Flynn quoted to me that he actually was sorry he even related the incident because it had caused him quite a bit of trouble and apparently not many people believed him anymore. At the time of the incident I was somewhat skeptical myself, but quite frankly at this stage of the game I am not quite as certain as I was before. I keep asking myself why should he have to make up a story like this. However, we must face the fact that this could have happened by tree branch or some other object striking him over the forehead. The only thing we can be sure of is that he did suffer some physical blow to the right eye. 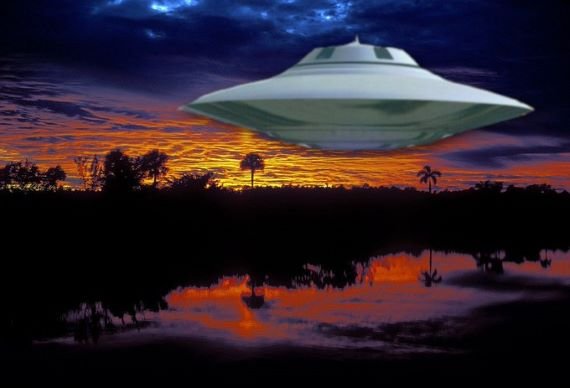 The incident would be investigated by NICAP and the Air Force, who examined the site of the alleged encounter to find a burned circle of earth measuring 74 feet across, as well as some scorched trees. Despite this intriguing physical evidence, the Air Force was quick to dismiss the case, and it was suggested that Flynn had merely hit his head on an overhanging limb and then fabricated the whole thing. However, investigators from NICAP and local law enforcement weren’t so sure about this. Interviewing the people closest to Flynn showed that he was an honest, well-like citizen who had never been known to play pranks or tell tall tales. It was surmised that whatever had happened to him out in that swamp, he at least really seemed to believe his story. A rather ominous footnote to the whole thing is that when Gordon Lore, the NICAP Assistant Director, contacted the Homestead Air Force Base looking for more information, he was told that they had absolutely no record of the case in any of their files, and that “Nothing concerning this specific case was found in the files of the base commander, intelligence division, civil engineering, nor this office,” despite the fact that they most certainly had investigated it. Curious.

We are left to wonder just what happened out in that swamp on that day. What happened to Flynn? What were these entities and what did they want? Is it even real at all or just a hoax? Was there a cover-up involved? We will likely never know the answers, and it remains another weird one for the files.