Meandering through a hilly rural area of Otoe County, in southeast Nebraska is a modest, unassuming little road that looks like any other, so nondescript that one could easily pass it by without giving it much thought. It is little more than a glorified dirt trail, barely wide enough for a car to go down, and even the name of the dusty one-lane gravel road is unassuming and forgettable, appearing on maps as simply “L Street.” It is in every sense just a typical bumpy country road, yet this place has another name as well, “Seven Sisters Road,” which comes from a supposed sinister history that has made it one of the most haunted and indeed purportedly evil roads in the United States.

As with many pieces of local lore there are numerous iterations of the main story of Seven Sisters Road, but the most prominent version takes us back to the early 1900s, when a farmer made his humble home just off a dirt road in the boondocks along with his parents and seven sisters. He mostly had a peaceful and uneventful life, but one day he became enraged during an argument with his family, which would lead to tragedy. Depending on the version of the tale, he either caught his wife cheating, disproved of something one of his sisters had done, or simply had just been too drunk and lost his mind from all his years of toiling away out in the countryside. There are many reasons given for why he snapped, but all of them end in the same gruesome fashion. The deranged farmer is said to have killed the parents and then taken each one of his seven sisters to a different surrounding hill, where he proceeded to kill them by hanging them from trees to leave them hanging there swaying in the breeze. It was through these hills which L Street would be built, and the tale goes that the trees from which the seven sisters had been hung were chopped down and some of the hills shaved down to make way for development. It is unknown just how much any of this scary story is true or if it has to do with the area being haunted, but by all accounts haunted it is.

One of the most commonly reported strange phenomena is that of eerie, disembodied screams coming from the dark hills, the source of which can never be determined even though they typically sound very close by. Other various phenomena are the sound of ghostly bells, glowing eyes in the dark, shadow figures, and weather that changes suddenly for no reason at all. Cars that drive along the road are allegedly plagued with all sorts of strange anomalies, such as the gasoline suddenly going empty, headlights that dim or turn off, radios that go haywire or play creepy voices, windows opening and closing by themselves, engines sputtering or stalling, speedometers or other instruments that will stop working, and a sense of confusion will sometimes descend that causes drivers to speed up or stop without knowing why they are doing so. There are also people who claim that electrical equipment will inexplicably fail in the area, compasses will go haywire, and that cell phones get no reception here. Even weirder and more frightening that any of this are the ghostly apparitions people have seen hanging from trees or wandering about the area. One witness named Cheryl Ann Fletcher saw something like this as she was hiking through the area one summer with two others. She says that they noticed a gnarled tree from which corpses were hanging. She explains:

It was clear as day, as if it were you and me standing right here. There were seven bodies, males and females mixed. The one that captured my attention was a little boy who was blonde, he was about 7 years old.

She claims that this boy actually reached out to grab her hard enough to leave indentations on her skin, before they all vanished into thin air to leave the ancient, twisted tree empty and alone. The experience shook her deeply, but she would return to the area on another occasion looking for answers. There she would meet a farmer who claimed that there was a hulking black shape with glowing red eyes that roamed his property and the surrounding area, which she would deem "demonic." Interestingly, reports of some sort of red eyed phantom that looks like an upright bear with a wolf face have been coming from the area for years, including a story from 1968, when a group of terrified teenaged boys told police that the creature had attacked them and stopped their car by holding onto the bumper. 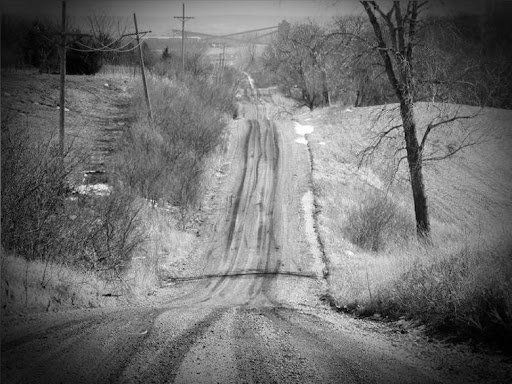 It’s all very spooky, and there are witnesses who swear that their experiences are true, but it seems that at least some of it is based in urban legend. For instance, there doesn’t seem to be any record of such grim murders ever being carried out here, nothing ever mentioned in the papers at the time, so it is hard to know if any of it is true. This doesn’t necessarily mean there isn’t a haunting, it just makes it harder to tell what the origins of such a haunting could be. Was there some other atrocity committed here, perhaps a murder? Does it have something to do with the creepy old private cemetery that lies within these hills? Whatever the case may be, the stories and legends persist in this place, various paranormal investigators have come here, and it remains one of the more haunted roads in the United States.