During World War II the skies over Europe were no stranger to battle. Here there were frequent engagements between fighter planes, and the sounds of machine gun fire and explosions were as common a background noise as the singing of birds or the chirping of crickets. The violence became a fact of life in many places, a common occurrence, yet in the summer of 1941 a very strange series of events would play out in the skies over Le Mans, France that was far from the ordinary. At the time a French soldier by the name of Daniel Ledger was at Le Mans when his attention, as well as that of the villagers, was drawn to an unusual sight in the sky in an area above what was then a German occupied airfield in nearby town of Raineries. And so would begin a weird odyssey involving UFOs, crashed spaceships, and a mysterious alien woman.

On that summer day they could see what looked like a dense, aluminum-colored cloud that was shaped somewhat “like the handle of a frying pan” and the whole of it ringed with a mist that orbited the more solid looking darkened interior. This odd cloud seemed to be more than just a cloud, as it had a certain weight and solidity to it, and it was also moving across the sky faster than the other clouds. It was indeed a strange sight, but what made it even stranger still was that there seemed to be German fighter planes circling the mass, looking like flies at that distance but the droning of their engines still audible and unmistakable. From what they could see, the German planes seemed to be attacking the cloud, but as they did another, larger cloud descended to hover over the scene, this one described as luminous and matching the speed of the one below it. Upon the arrival of this cloud, the German planes that came close to it were seen to “fall down like leaves” for several seconds before taking to the air again. 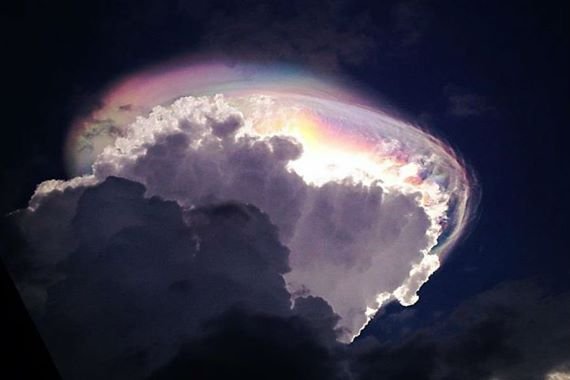 To Ledger it seemed like their engines were cutting out to send them into a temporary free fall, and he suspected this was being done as a defense by the clouds. This would go on for nearly a full hour before the planes veered away and the clouds disappeared into the distance. Ledger would claim that he looked through newspaper reports in the following days and found not a single mention of anything that could have explained what he had seen. Puzzled, he tried to put the bizarre experience out of his head, but little did he know that this was to pale in comparison to another experience he would have a few years later.

In July of 1943, Ledger had been conscripted by the Germans to work at a labor camp in the coastal town of Gdynia, Poland, and one day he requested permission to visit the town of Exelgroud, which was granted. The only way for him to go at the time was on foot, but it wasn’t far, and so he headed out but soon found that the walk was taking longer than he expected. Ledger apparently decided to take a shortcut that took him over an area of sand dunes along the Baltic beach. As he made his way across the sand, he noticed something up ahead that was quite unusual. Half buried in the sand was what appeared to be some large grey metallic object, seemingly lodged deep into a dune as if it had fallen from the sky to crash there. Curious, Ledger approached the object and that was when things became even stranger than they already were.

As he drew closer, Ledger was met with the sight of a woman with long blonde hair and dressed in some sort of tight-fitting black or dark-brown jumpsuit with a belt, who appeared to be trying to manually dig the weird object out of the sand. At this point, Ledger was convinced that this must be a German pilot who had gone down in some sort of experimental aircraft and was in trouble, and this made him slightly hesitant to go any closer. He contemplated turning back, but as he did so the strange woman turned to face him, as if somehow aware of his presence. Her features were completely human, even pretty, slightly Asian looking despite her flowing blonde hair, and a look of relief spread across her face. She gestured for him to come over and help her, which he warily did, still not sure of who this person was. 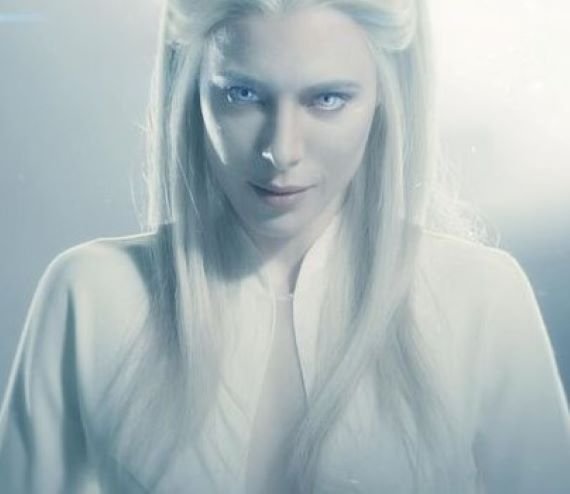 When he reached the object, she gestured that she wanted him to dig with her, and he soon found that the craft was not as firmly embedded in the sand as he had thought. They were able to dig it mostly free in short order, and Ledger noticed that it was composed of a completely smooth metal that had no noticeable joints or seams. As they dug she talked to him, and when she finally spoke it was not in German or Polish, but rather a language he was unfamiliar with, but which sounded vaguely Russian. Although he could not understand what she was saying she seemed to understand him, although he was not sure why he had this impression. When they finished removing the last of the sand she repeated some unintelligible words which he took to be thanks, and then touched a button in her belt. When she did, a door on the metal object slid open, even though there were no seams to show a door was there, and she gestured to the sky and tapped her chest, then motioned for Ledger to back away from the craft. He could understand that she meant to take off, and so he did as he was told, still a bit confused as to who this person was and what was going on.

The woman then entered the object and the door slid closed behind her, blending seamlessly into the exterior like it had never even been there at all. Ledger claimed that before the door closed he could briefly see that the interior was devoid of any instrumentation panels, and that the woman was assuming a position on all fours, as if she were about to enter a “motorbike competition.” The craft then began to rise into the air in a shower of loose sand, glowing slightly as it did. Ledger took a few more steps away, and was astonished that the aircraft made no noise at all. The craft silently hovered there for a moment before suddenly shooting straight up into the sky at phenomenal speed and vanishing to leave him standing there dumfounded at what he had just seen.

It is important to note that even after all of this, Ledger was convinced that this had been some form of experimental aircraft and that he had met its very human pilot, but in later years he was not so sure. When UFO reports started to emerge more frequently and the United States and Soviet Union began their space programs, Ledger remembered the German fighters circling that strange cloud and his weird encounter with the woman and her ship on the dunes and he wondered if perhaps these had been brushes with something beyond this world and even if they were connected somehow. Being as this is a rather obscure case with little in the way of corroborating evidence, it is hard to know what to make of it. Who was this mysterious woman and where was she from? Was she ever even real at all? What connection, if any, does it all have to Ledger's previous claimed experience? We will probably never know, and it remains another historical oddity confined to the forgotten mists of history.