The UFO field is peppered with the accounts of those who have supposedly come face to face with these alien forces from beyond our world and indeed our very comprehension. These mysterious individuals are known as "contactees" within the field, and there is no shortage of those who would claim to have experienced the UFO phenomenon up close and first hand. Some of these people have managed to go on to become quite well known for their claims and exploits, and surely one of the more well-known and indeed more outlandish accounts comes from a contactee who had a mysterious encounter out in the desert of New Mexico and would weave this into a cultish organization and into the very fabric of contactee lore.

Daniel Fry started his strange odyssey back in the 1940s, when he was based at Holloman Air Force Base in New Mexico, involved in rocket research at what was then known as the White Sands Proving Ground, which is a military testing area operated by the United States Army. In the days during and after World War II, rocketry and missile technology was being hotly pursued, and Fry, who had a background as an explosives supervisor in the 1930s and 1940s, was mostly involved with setting up instrumentation to test rockets at the range for the company Aerojet General. On July 4, 1949, personnel at the base were gearing up for Fourth of July celebrations at nearby Las Cruces, but for reasons that aren’t clearly understood he missed the bus and was left behind at the base. Fry then decided to go out and explore the area, going down a desert path he had never been down before, and from here he would allegedly have a bizarre experience that would change the course of his life.

As Fry walked along that dusty trail, he noticed in the sky what he would describe as a “strangely behaving star” that seemed to be approaching and getting closer. As it seemed to come in for a landing not far away it was very obvious that this was no star, but rather some sort of craft, described as an "oblate spheroid" measuring 10feet in diameter and about 16 feet high. He would say of what was going through his mind during the outlandish situation:

What should I do next? Should I return to the base and report the advent of the craft? This, at first, seemed the logical thing to do, but then another thought intervened. It would take at least three quarters of an hour for me to get back to the base, find someone in authority, and return with other observers. What if the craft took off in the meantime? There would be nothing but a crumpled patch of brush to substantiate my story. Who would believe me? If anyone did believe, who would dare to admit it? I had read enough of the ridicule heaped upon those who had been incautious enough to admit having seen some unexplained objects flying in the air. How much worse would be the lot of one who claimed to have seen one land and to have been close enough to touch it, yet had no proof except a flattened patch of brush!

As he stood there in awed shock wondering what to do, he says that he was contacted telepathically by an entity calling itself “Alan,” who invited him to approach and come aboard. When Fry entered the craft, he would claim that the entire floor became transparent, as if he were standing on a pane of glass, and “Alan,” who seemed to be invisible and would not reveal itself, explained some of the technical aspects of the ship and how it worked, as it began to rise and travel at vast speeds of an estimated 8,000 miles per hour. Fry would say that the ship shot out over the landscape to reach New York, after which it would fly back to New Mexico, a round trip which took an estimated 30 minutes, all as Alan explained the finer points of physics and the prehistory of Earth. At no point did Fry actually ever see Alan, and he was told that the ship was in fact remotely controlled by the being from a larger mother ship. 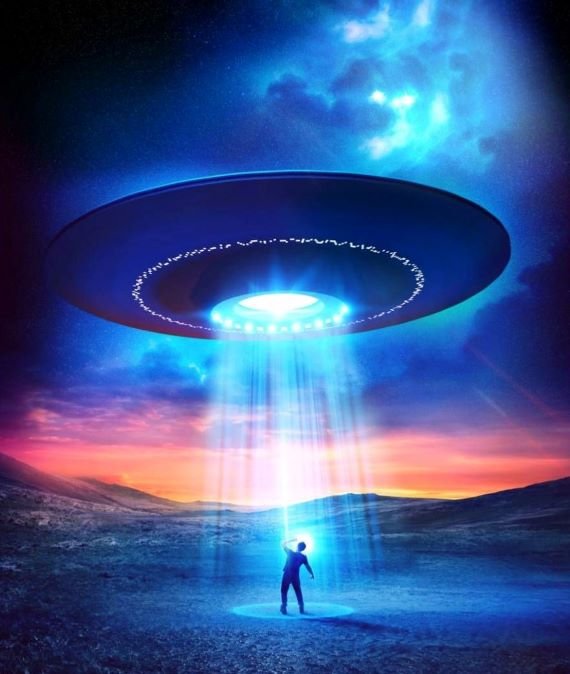 Fry was dropped back off where he had started, but this would not be his last encounter with the mysterious “Alan.” He would claim to be contacted several more times between the years of 1950 and 1954, and during these meetings he learned more about Alan’s people and their purpose on Earth. According to Alan, they were descendants of the original race of the lost continent of Lemuria, which the entity claimed had actually been destroyed in an ancient nuclear war and which had left them homeless and adrift. Luckily, they had mastered space travel, and so a handful of them were able to escape aboard their ships, flying out to Mars to start over. There on the Red Planet they would rebuild their society and use it as a launching pad to other star systems and planets, fashioning a sort of empire across the stars that it called “Galactic Confederation,” and according to Alan they had even mastered space and time itself.  Alan gave vague messages about how they were there to help humanity, to save us from destroying ourselves, and that they should not be afraid of their presence on Earth. Fry claimed that Alan told him:

The political tensions which now exist between your nations must be eased. If either of the two dominant nations of earth were to achieve conclusive scientific superiority over the other, under present conditions, a war of extermination would be certain to follow. We are not here to assist any nation in making war but to stimulate a degree of progress which will eliminate the reasons for war on Earth, even as we, some thousands of years ago eliminated the reasons for conflict among our own people.

Fry would write a book about the whole wild story called The White Sands Incident in 1954, and would go on to create a sort of quasi-religious organization called “Understanding Inc.” in El Monte, California in 1955, based on what he had learned from the aliens, its mission statement being “'bringing about a greater degree of understanding among all the peoples of the earth and preparing them for their eventual inevitable meetings with other races in space." For a time, the group spread rapidly, with newsletters and numerous lectures and seminars, and they even had a sprawling compound near Tonopah, Arizona. There was a lot of talk at the time that it was a freaky UFO cult, but Fry would always deny this, saying:

The group is not mystic, and is not a flying saucer watching organization although some members hold definite beliefs and interests in both areas. Understanding Inc. which is a non-profit, tax exempt corporation, works on the principles that there is nothing that members are required to believe or accept or do.

Fry became very involved with the alien contactee scene at the time, travelling around the country to attend various UFO events, and would write several other books, including Atoms, Galaxies and Understanding, To Men of Earth, Steps to the Stars, Curve of Development, Can God Fill Teeth? and Verse and Worse. However, Universal Inc. would start to dwindle in the mid-1970s, and by 1979 they were in steep decline and disappeared. In the years since, there has been much skepticism aimed at both him and his supposed UFO encounters, with a few damning strikes against him. For one, he famously failed a lie detector test about his experiences on national television, and although that is not a completely reliable condemnation, other points are. For instance, photos that he took of the supposed craft were analyzed and found to have likely been faked, and his claimed educational credentials as a “doctor” turned out to be a doctorate in “cosmism” issued by a mail-order organization called “St. Andrews College” in London, England, from which it seems pretty much anyone can buy a degree for a price. Another odd detail is that some of his story changed over time, such as the date of his first incident being moved from 1949 to 1950, and just about the only thing we can be sure of is that Fry did indeed work at White Sands as an engineer in some capacity.

We are left to wonder, as we are in a great many supposed UFO contactee situations, just how much of the story is true, and how much has been fabricated or twisted and warped over time. Is Daniel Fry for real, or is this just delusions and a hoaxer trying to get fame off of his books and movement? What really happened out there in the wilds of White Sands? There will probably never be any concrete answer, but whatever you believe, Daniel Fry and his mysterious experiences have managed to remain entrenched in UFO lore, among the many stories from people like him.

Our Solar System Formed In Less Than 200,000 Years