The White House and the Ghost of Abraham Lincoln

Abraham Lincoln perhaps needs no introduction. The 16th president of the United States from 1861 to 1865, he was in office through the American Civil War, and is known for being instrumental in abolishing slavery, modernizing the economy, and ensuring the survival of the Union. It was all very impressive for a man who had been born into poverty and was completely self-educated, dragging himself from his humble log cabin in the boondocks of Indiana to become one of the most celebrated and beloved historical figures in American history. Many readers will already know this, and you may also know of his tragic death at the hands of by Confederate sympathizer John Wilkes Booth in 1865. What many might not know, however, is that it seems that Lincoln never really went away, and in fact seems to be still quite active at the White House even in death.

Lincoln was having paranormal experiences even before his death. He rather famously once saw his own double image in a mirror at his home in Springfield, Illinois, and he would tell his wife, Mary Todd Lincoln, that one had looked normal, while the other had been pale, deathly, and wraith-like. The deeply superstitious Todd had taken this to be an omen, meaning that he would do well in his first term, the healthy mirror image, but would not live to see the end of his second, the ghostly image. On another occasion in 1865, not long before he was murdered, he was staying in the White house when he had a frightening premonition of his own death. He would say of this:

I retired very late and I soon began to dream. There seemed to be a deathlike stillness about me. Then I heard subdued sobs, as if a number of people were weeping. I thought I left my bed and wandered downstairs ... I arrived at the East Room. Before me was a catafalque, on which rested a corpse wrapped in funeral vestments. Around it were stationed soldiers who were acting as guards; and there was a throng of people, some gazing mournfully upon the corpse, whose face covered, others weeping pitifully. ‘Who is dead in the White House?’ I demanded of one of the soldiers. ‘The President,’ was his answer. ‘He was killed by an assassin.'

In addition to these paranormal premonitions, Mary Todd was known to be quite interested in spiritualism, and is said to have often held séances in the White House in an effort to make contact with their dead sons, Edward and Willie. Indeed, Todd’s interest in the supernatural and in spirit mediumship was well known, and Lincoln had also adopted a sort of skeptical curiosity about it all, sometimes even personally attending these séances. At the time he probably never thought that he himself would become one of the most famous ghosts to ever haunt the already haunted White House.

The White House has had many ghosts over the years, including those of past presidents or first ladies and even a spectral cat said to roam its rooms and halls, but one of the most frequently sighted and active is that of Honest Abe himself. One of Abraham Lincoln’s favorite things to do, it seems, is to go around rapping on the walls and door of the aptly named Lincoln Bedroom. Former president Harry S. Truman and his daughter, Margaret Truman, both experienced this while staying there, and the Lincoln Bedroom is a wellspring of Lincoln ghost phenomena, including his heavy footsteps, disembodied voice, the rapping, and on many occasions his apparitions as well. Lincoln’s ghost is said to be spotted lying on the bed or sitting on its edge in the Lincoln Bedroom, and it is said that one time Eleanor Roosevelt's secretary, Mary Eben, ran screaming from the room after she saw the specter sitting there in the room casually putting on his boots. Many others have not seen the ghost itself, but reported feeling Lincoln’s presence following them, skulking about around them, or even passing through them. Indeed, Eleanor Roosevelt claimed that she had felt Lincoln’s presence on several occasions.

While the Lincoln Bedroom has the most activity, the apparition of Lincoln has been seen all over the White House by both staff and quite a few famous figures. Former First Lady Grace Coolidge, wife of 30th president Calvin Coolidge, once reportedly saw Lincoln’s ghost standing at the window of the Yellow Oval Room, and said the specter was just sort of staring out over the Potomac river in seemingly deep contemplation with his hands clasped behind his back. When he became aware of her presence he reportedly vanished into thin air. Tony Savoy, former White House operations foreman, once saw Lincoln sitting in a chair wearing a dapper pinstripe suit at the top of some stairs as if he had every business in the world being there. Theodore Roosevelt, Franklin D. Roosevelt, and Maureen Reagan all saw the full apparition of Lincoln walking around the premises as clear as day, and when Queen Wilhelmina of the Netherlands visited the White House in 1942, she allegedly answered a knock at her door one evening to see Lincoln standing right in front of her in a frock coat and top hat. The incident was supposedly so shocking for the Queen that she fainted right there on the spot. Dwight D. Eisenhower once saw Lincoln walk down the hall right towards him, and Ronald Reagan’s daughter Maureen also saw the ghost standing in the middle of her room one night dressed in a red coat. 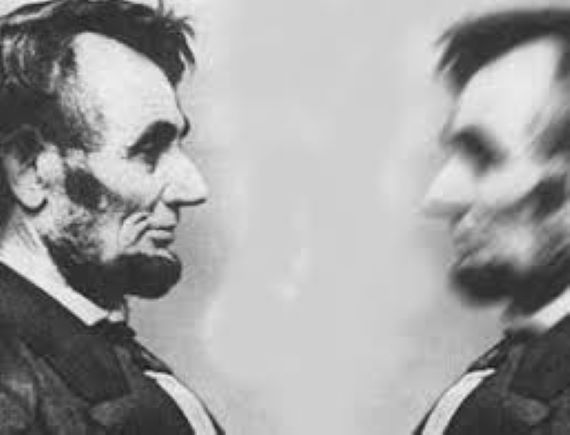 Some people have even claimed to have talked to Lincolns ghost. President Lyndon Johnson supposedly often saw the ghost, and one time during the turmoil of the Vietnam War the specter appeared and he asked him in exasperation about how to handle the war, after which Lincoln purportedly simply stated in response, "don't go to the theater." Even more famously than this odd incident was when British Prime Minister Winston Churchill was staying there and met Lincoln’s ghost. He allegedly came out of a long bath one evening and walked into his room completely naked, only to find the ghost of Lincoln standing there looking very lifelike by the fireplace. Without missing a beat, Churchill supposedly said “Good evening, Mr. President. You seem to have me at a disadvantage.” After a few moments, Lincoln smiled and vanished, leaving the Prime Minister to get dressed and have his usual nightly cigar and glass of scotch. Although Churchill handled it as coolly as anyone could have, he is said to have requested a different room on subsequent visits to the White House.

Lincoln’s ghost has been seen at a whole bunch of other locations as well, including his Springfield home, the Ford’s Theater where he was assassinated, his former law office, and even lurking about a haunted portrait of his wife Mary Todd Lincoln, but he seems to be most at home in the White House. What is it that keeps Lincoln tethered to this place and why does he keep lurking about? What is it about him that makes his presence so strongly imprinted into this place? Is any of it real, or is it all spooky tall tales? It seems that with so many high profile witnesses there is at least something weird going on, and we are left to wonder whether the 13th president of the United States perhaps still roams these halls.

Looking at the Ultimate, Master Shapeshifter: The Djinn