Today's article is the third and final one on the issue of alleged crashed UFOs and dead aliens in the U.K. This one is a very strange and intriguing story, for reasons that will become apparent. It was in 1991 that Leonard Stringield - a UFO investigator-author who spent much of his time investigating cases of what are known as UFO "crash-retrievals - revealed something notable. In July 1991, Stringfield published his biggest, self-published report. Its title: UFO Crash/Retrievals: The Inner Sanctum. When the 142-pages-long book was made available, I bought a copy and sat down to read it. I was amazed to see that Stringfield's latest publication included an account from 1964 and near Penkridge, England - which is less than twelve miles from where I grew up as a kid. I corresponded with Stringfield and explained that I had lived in the area and knew it well. As a result, on March 29, 1994 Stringfield - who died in December 1994 - very generously let me use the story for my own work. That account, in Stringfield's words, reads as follows: 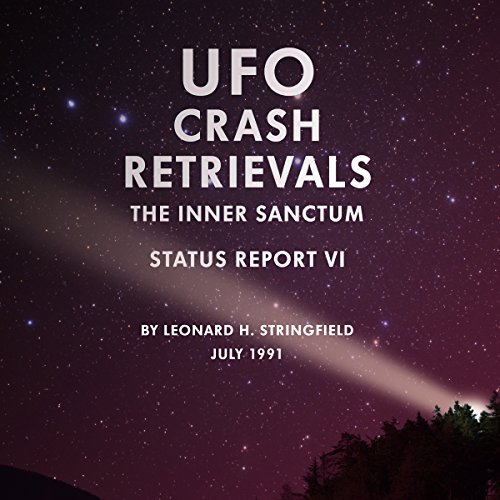 "Some time in 1964, 'somewhere at sea,' between the Caribbean and the Atlantic, a specially rigged LST, a flagship for a naval amphibious force, received a coded radio message in its 'crypto-machine' room, which reported that 'artifacts' had been received with three dead personnel. According to my informant, former Third Class Petty Officer, S.M. Brannigan (pseudonym) a specialist trained to translate intercepted Russian transmissions, the decoded report stated that a UFO had crashed in two parts; the main section near Penkridge, in Staffordshire, England, the remains in West Germany. He further stated that the retrievals of the parts and the occupants were conducted by Air Force Intelligence and shipped to Wright-Patterson Air Force Base, adding that U.S. and other NATO interceptors were involved. Brannigan admitted that there was more to the incident, involving coded information, that he preferred to keep confidential."

Stringfield concluded: "The Brannigan disclosure, while sketchy, may spotlight only the tip of the iceberg as to the scope of military crash-retrieval operations in foreign lands. Researchers know that reports of crashes are worldwide,  from pole to pole, on every continent, and in many countries. If such incidents are to be secreted, it is my suspicion that U.S. special retrieval teams have been, and still are, prepared to 'go into action' into any crash location within its sphere of military or economic influence such as was exercised with NATO in the 'artifact' retrievals in England and West Germany."

At the time, there was nothing else to say. That was the beginning and the end of the story. As for Stringfield, he got no more leads. At least, it was the end for a while. In 1995,  Irene Bott - who also lived in the area - established the Staffordshire UFO Group. Then, in September 1996, Irene put a conference together to promote her group and to demonstrate the incredible level of UFO activity that was going on in the skies above the Cannock Chase. Me and Irene became good friends and, one day not long after the conference, I told her of the account that Stringfield had published in his report. Irene was very excited by this and contacted the local news paper: would they like a story on the case? It turned out that, yes, the local media were interested. Very interested. I should stress that from 1994 to 1996 I was still working as a forklift-driver and van-driver, and also writing my first book (for Simon & Schuster) A Covert Agenda. As a result, I didn't have much time to dig into the 1964 affair anymore. But, luckily, Irene did.

As a result of the newspaper coverage, Irene got some interesting snippets of information from people in the vicinity. And she got a very intriguing - and lengthy - story from a man named Harold South. He lived only a short drive from where both me and Irene lived. South, in his late sixties at the time (we estimated), claimed to have seen the UFO in a field close to Penkridge, which is where "Brannigan" said the unearthly craft came down. South also told Irene that he had been harassed by both the local cops and military personnel and that film was taken out of his camera - after it became clear to the authorities that South had taken a few photos of what he described as a small, triangular object. In December 1996, me and Irene arranged to visit South in person. We did so on the 11th of the month. We called him - from my landline - in the morning and arranged to drive over to his home. When we got there, South was very disturbed and worried. South claimed that in the time between me calling him and me and Irene arriving, he had received a call from the Ministry of Defense - something that had put South into a state of distinct unease. South said that the MoD told him to call another number - as in right away. He did not. Rather, South put the phone down.

I have to say that, at first, me and Irene suspected this was a ruse: South's way of getting out of being interviewed - after possibly having changed his mind about speaking to us. It turns out that was not the case, though. We asked South if we could use the U.K.'s "1471" system (that permitted someone to find the number of the most recent incoming call). We dialed. Sure enough, and just as South said, there was a Ministry of Defense number. It turned out not to be from the main MoD building in London, but from the Ministry of Defense Guards Service at a local military base, Whittington Barracks. The person who answered the call claimed no knowledge of the MoD's call to South, even though we pointed out that we had specific evidence of the call. The conversation went no further - apart from in circles. South, by now, was a man on edge: he quickly closed the conversation with us, clearly concerned that he was now in a situation that he had no desire to be in. South stopped the interview and refused to speak to us again. It was just another day in the weird world of UFOs.

A final word: such was the interest that surfaced when the story originally got out, a blog was created - titled "Penkridge Mystery 1964." - by a local guy. Although the blog has not been updated for years, it's still open and contains a large amount of material on this admittedly very odd story. Maybe, now, someone else will dig further.