Viking Ship Update: It Was Buried Alongside Ritual Structures

Ground-penetrating radar has revealed that an ancient Viking ship was buried alongside several ritual structures such as a cult temple and a feast hall.

It was ground-penetrating radar that discovered the ninth-century Viking ship back in 2018 at Gjellestad in the southeastern part of Norway. And since its discovery, more scans have revealed even more surprises. Thirteen burial mounds (that included the ship grave) were discovered with some of them measuring 98 feet in width. What’s even more surprising was that several buildings were also found that could have been used in rituals.

Close to the ship grave, two bigger circular mounds and seven smaller ones were found in addition to four rectangular “settlement structures” with the largest one measuring 125 feet long. The smaller structures could have been used as a farmhouse and a temple while the biggest one may have been a feasting hall.

In an email to Live Science, Lars Gustavsen, who is an archaeologist with the Norwegian Institute for Cultural Heritage Research (NIKU) and the lead author of the study, explained this further, “The only structure that can be securely dated to the Viking Age at Gjellestad is the ship burial but, taking the whole site into consideration, we can probably say that it was important for the elite to exhibit their status through lavish and carefully planned burial rituals,” adding, “We believe that the inclusion of a ship burial in what was probably an already existing — and long-lived — mound cemetery was an effort to associate oneself with an already existing power structure.”

The fact that the buried ship was 66 feet in length is quite unusual as most Viking ships that were buried were less than 39 feet. Actually, only about a handful of these large ship burials have been unearthed in Norway. (Pictures of the radar scans can be seen here.)

As for the reasoning behind the ship burials, it’s not exactly known for sure, but experts do have a theory. “Since these were societies whose identity was closely tied to the sea and seafaring, the ship could, in this specific context, be seen as a vessel transporting the dead from the realm of the living to the realm of the dead,” Gustavsen stated, adding, “Or it could simply be a display of wealth, or to demonstrate that one belonged to a certain social and political class.” 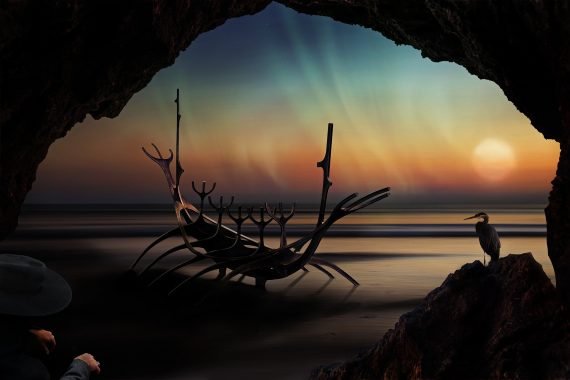 And just last month, archaeologists found yet another surprise in the burial mound while they were excavating the ship in order to preserve it. They discovered several large animal bones that probably belonged to an ox or a horse that was probably used as a sacrifice during the burial.

Experts are still working at the site and their work should be finished by next month. The research was published in the journal Antiquity where it can be read in full.