A prehistoric reptile that lived around 150 million years ago looked like a cross between a dolphin and a shark. Its exceptionally well-preserved remains were discovered close to Kimmeridge Bay in the United Kingdom.

This newly identified reptile has been named Thalassodraco etchesi – Thalasso means “sea” in Greek; draco means “dragon” in Latin; and etchesi is in memory of Steve Etches who was a amateur collector that found the remains. The species was part of a group of extinct marine reptiles called ichthyosaurs. Since it had such unusual features, it was classified as its own genus.

It had huge eyes and a big rib cage which indicates that it would have had strong lungs and good visibility that allowed it to swim deep underwater to catch its food like squid and other slippery creatures. 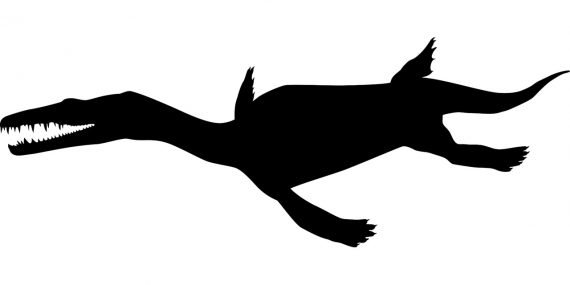 Megan Jacobs from Baylor University in Waco, Texas, described the significance of this discovery, “People have been excavating ichthyosaurs in this area for 200 years, but finding a new species – let alone a new genus – is very rare.”

Jacobs, as well as David Martill from the University of Portsmouth, analyzed the remains by taking high-resolution photos and found that this newly identified creature had a long mouth, a shark-like tail, and a dorsal fin. It completely lived beneath the water except to come up for some air (similar to dolphins).

As for its jaw, the upper portion of one side was the best preserved, so they analyzed that area specifically and they noticed approximately 50 smooth and small teeth. Since they were only able to study about a quarter of its jaw, they estimated that this creature had around 200 teeth in total. This would certainly explain how they could catch such slippery prey like squid.

This is actually pretty significant as the majority of other ichthyosaurs from that time period had larger teeth and not as many. Another notable fact was that the remains of the Thalassodraco etchesi measured 2.5 meters in length (8.2 feet). The majority of ichthyosaur remains that have been previously found in the United Kingdom measured between 5 and 11 feet in length.

While its body length seemed to be average, its unique features certainly made it quite special. An artist’s impression of what the Thalassodraco etchesi would have looked like 150 million years ago can be seen here.

The research was published in the journal PLOS One where it can be read in full.