An Ancient Crater With a Mysterious Past and Present

It’s an absolute certainty that many of the craters that can be found peppered throughout the Earth’s surface were the result of meteorite and asteroid strikes – perhaps even comets, too. Arguably, the most famous one, period, is Arizona’s "Meteor Crater," that is located near Winslow, Arizona. This mammoth scarring of the landscape occurred around 50,000 years ago, and is more than two miles wide and more than five hundred feet in depth. There are, however, some such craters that are very difficult to explain in a down to earth fashion. Welcome to the strange story of the Lonar Crater. It can be found in the state of Maharashtra, India. The locals aside, no one had seen the crater until 1823. Interestingly, NASA has taken an interest in the ancient crater. NASA states of the now-water-filled crater: "India’s Lonar Crater began causing confusion soon after it was identified in 1823 by a British officer named C.J.E. Alexander. Lonar Crater sits inside the Deccan Plateau—a massive plain of volcanic basalt rock leftover from eruptions some 65 million years ago. Its location in this basalt field suggested to some geologists that it was a volcanic crater. Today, however, Lonar Crater is understood to result from a meteorite impact that occurred between 35,000 and 50,000 years ago."

NASA continues: "Lonar Crater is approximately 150 meters (500 feet) deep, with an average diameter of almost 1,830 meters (6,000 feet). The crater rim rises roughly 20 meters (65 feet) above the surrounding land surface. Scientists established Lonar’s status as an impact crater based on several lines of evidence, perhaps the most compelling being the presence of maskelynite. Maskelynite is a kind of naturally occurring glass that is only formed by extremely high-velocity impacts. A Science article published in 1973 pointed out this material’s presence, and suggested that the crater’s situation in volcanic basalt made it a good analogue for impact craters on the surface of the Moon." 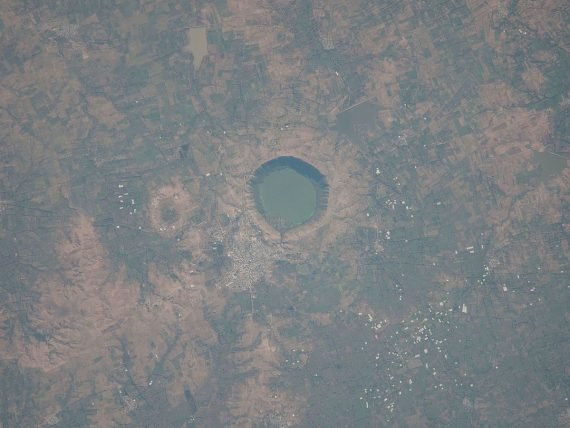 It should be noted that there is a very interesting, and intriguing, story attached to the history and lore of the Lonar Crater. For this part of the saga we have to turn our attentions to the Skanda-Purana, which is an approximately 1,100-year-old Hindu document, as Priya Ramachandran reveals: "The name 'Lonar' came from the demon, Lonasura, who lived in this subterranean abode and terrorized the people of the Earth. Now, heeding to his people’s prayers Vishnu came to the rescue, by sending his avatar in the form of a man named Daityasudna, who exposed the demon’s hideout, kicked away the rock that kept them hidden, thereby creating that crater. He slayed the mighty demon and when his blood was spilt, it turned into a lake." 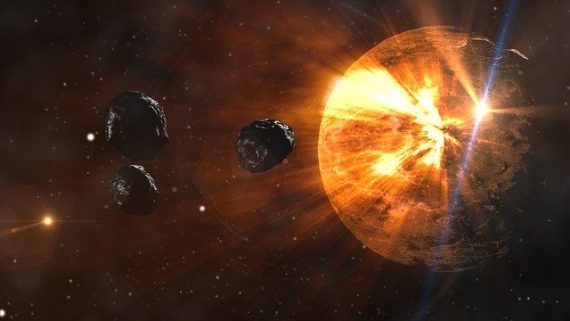 David Hatcher-Childress, who has extensively investigated the mystery, makes a very good point: "If such geologically recent craters as the Lonar [Crater] were of meteoric origin, why then do such tremendous meteorites not fall today? The Earth’s atmosphere fifty thousand years ago probably was no different from today’s, so a lighter atmosphere cannot be advanced as a hypothesis to explain an immense meteorite size, which of course would be considerably reduced by heat oxidization within a gaseously heavier atmosphere." Hatcher-Childress also states that, "no trace of any meteoric, etc., material has been found at the site or in the vicinity, while it is the world’s only known 'impact' crater in basalt. Indications of great shock (from a pressure exceeding six hundred atmospheres) and intense abrupt heat (indicated by basalt glass spherules) can be ascertained at the site."

And, to add to the weirdness, there is the following, also from NASA: "In early June 2020, a crater lake in west-central India promptly changed from green to pink. For now, the reason why remains a mystery. Lonar Lake’s color shift occurred over the span of a few days. The change is visible in this image pair, acquired on May 25 and June 10 with the Operational Land Imager (OLI) on Landsat 8. Scientists collected samples from the lake and are awaiting lab results before they can say with certainty what caused the change. They speculate, however, that the color could be a result of microscopic life that thrives in water with high salt concentrations."

Possible Alien Life on Other Planets is Becoming Less Likely