Beware of the “Metroplex Monsters” – There are More Than a Few of Them!

Over the years I have reviewed books on strange creatures seen in various continents. Countries, too. Even states. But, up until now, this is the very first time I've reviewed a book solely absolute an absolute myriad of monsters seen in the Dallas-Fort Worth Metroplex! I have to admit that when you think of numerous strange beasts roaming around, you don't immediately think of Dallas and Fort Worth. And, I'm from the area! In fact, that's one of the reasons why I wanted to read and review the book that you will son become familiar wth. I live roughly halfway between Dallas and Fort Worth, and I can say for sure there's no doubt that the area has its famous monsters, such as the so-called "Goat-Man" that caused terror at Lake Worth in the summer months of 1969. And, every now the local media will get excited by the sighting of what has become known as a "Texas Chupacabra." Also, there are occasional reports of "Alien Big Cats," alligators, and that's about it. Or, at least, I thought that was the end of it. Apparently not. Jason McLean - who I occasionally run into at conferences in the area (or, I did run into him, until the pandemic began) - has written a 122-page book titled Metroplex Monsters: Dallas Demons, Fort Worth Gatmen & Other Terrors of the Trinity River. So, what does the book (published by The History Press) give us? Well, I'll tell you. 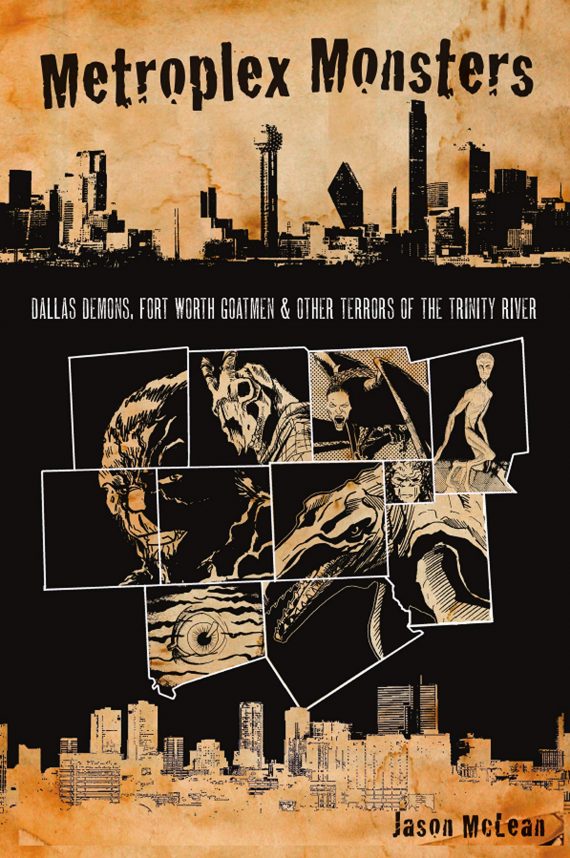 My first thought, on getting into the book, was this: how can there been enough material to fill a monster-based book on just the Metroplex? Apparently, quite easily! As for what the Metroplex actually is, there's this from the Visit Frisco website: "The Dallas/Fort Worth Metroplex, commonly referred to as DFW or North Texas, encompasses 13 counties and is home to just over 7 million people. The DFW area encompasses more than 9,200 square miles of total area, making it the largest inland metropolitan area in the United States." Now, onto the cases that McLean has, himself, investigated. Bigfoot fans won't be disappointed. After the introduction, the book continues with "Davy Crockett's Creature: A Brief History of Bigfoot in Texas." It's followed by a chapter titled: "What is Texas Bigfoot? Sasquatch or Shaman." Combined, both chapters provide fascinating material. And, yes Davy Crockett really did have an encounter of the Bigfoot-type. Or, "Wild Man," as the creatures were known back in the 19th century. Crockett wrote to his brother-in-law, Abner Burgin, that he had seen something bizarre and terrifying: and giant-sized, too. Crockett said: As a Christian man, I swear to you, Abe, that what spirit came upon me was the shape and shade of a large ape man."

As for the Shaman theory, McLean says: "...all Bigfoot sightings aren't an unknown species of giant ape or human cousin but rather are American Indian shamans on spirit journeys or are feral humans. For some American Indian tribes, there are traditions of medicine men going on prolonged sojourns in which tools are left behind to 'learn the ways of the earth' and bring those revelations back to the tribe." He adds that this process "can make those undergoing it appear more like an animal than a human, as the shaman's hair becomes unruly, and they will adorn themselves with fur." Well, I know for sure that most Bigfoot researchers in Texas believe that the creatures are simply unknown apes - and that's it. It will be interesting to see what the Sasquatch community in the Lone Star State will think of that! 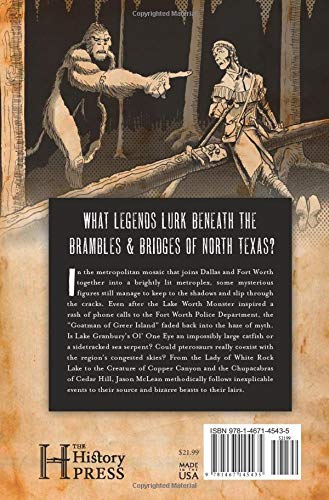 Of course, McLean has a chapter on the aforementioned Goat-Man of Lake Worth. It's the area's equivalent of Nessie: a resident monster. I say "resident" because now and again a report of the man-thing will pop up. If you're interested in the phenomenon of the Goat-Man, you'll definitely want to dig into this chapter as it runs to more than ten-pages and contains some cool artworks. The connection between monsters and old bridges appears in the matter of the Texas Goat-Man. And, there are seven-pages devoted to Dallas' most famous, ghostly character, the Lady of White Rock Lake.  I used to live at the lake for around three years and heard a lot of tales of the eerie woman. Equally eerie is the fact that White Rock Lake has a history of a Goat-Man in its midst, too.

Some of the beasts that McLean gets his teeth into are clearly paranormal, rather than flesh-and-blood (or, at least the way we interpret things). He says: "When discussing the things that go bump in the night, particularly in Texas, one must inevitably address the Lechuza. For those unfamiliar with Spanish, the word lechuza does mean 'owl' (a barn or screech owl usually), but it is also the colloquial name for a feared magical being. There's a cool piece of artwork that demonstrates the appearance of the thing. Monstrous, it surely is! For me the most intriguing chapter is the one that is focused on pterosaur-sightings. Yes, Texas does have a long history of monstrous, winged creatures. McLean reveals the stories of "The Ten Mile Creek Pterosaur;" "The Winged Weirdo of Witch Mountain;" Native American Thunderbirds; and dragons. That leaves us with the area's not so well-known lake monster: "Ol' One Eye," of Lake Granbury. I spent some time out there with cryptozoologist Ken Gerhard about fifteen years ago, but we didn't find anything. The possibility of the creature being a huge eel is discussed. Or, possibly a large alligator gar. And check out the section on massive catfish - not the kind of thing you want to cross paths with!

The Most Haunted Little Village in England