Black Magic, Murder, and the Witch of Ringtown Valley

There have long been tales of witches and black magic that have held people in a state of both awe and terror. There was a time when the dark wilderness out past the light of the lanterns and campfires was populated by such nefarious forces, and remote areas seemed to be particular wellsprings of grim tales of witchcraft, hexes, and curses. One such case involves a remote town that was allegedly besieged by a powerful witch, who was stopped by a tormented young man who had been the target of her spells and who would become embroiled within a trial pitting modern rationale against the ancient superstitions of witches and dark, arcane forces.

The setting for this odd tale is the normally quaint and peaceful Ringtown Valley, which sits within the wild Blue Mountains of Pennsylvania. Here there lived a woman by the name of Susan Mummey, who in 1910 began to carve out a reputation as someone with a rather dark power orbiting her. It seems to have started when one day she had a vivid vision or dark premonition, in which she saw her husband die horribly in an accident. It was such a potent and realistic vision that she begged him not to go to his job at the DuPont powder mill in Ferndale that day, but he brushed it off and went anyway. However, in a tragic freak accident, an explosion occurred at the factory and he was killed, just as his wife had predicted. It was tragic to be sure, but it also fired up rumors around town that Mummey was perhaps not quite what she seemed. 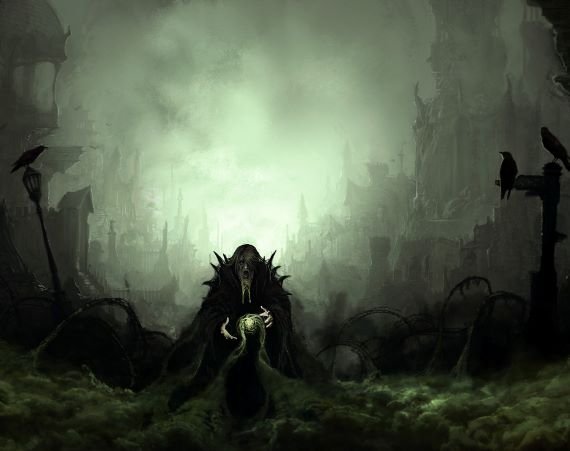 Even before her ominous prediction of her husband’s death, Mummey had been looked upon as a strange one. She had always been reclusive and not a little eccentric, living out in a ramshackle hovel, and had been locked in a long running feud with the Lindermuth family since 1876. She was known to have a whole bunch of weapons on hand, and was very confrontational with anyone who approached her land or even looked at her the wrong way, but after the explosion at the mill she came to be seen as even more dangerous, as now she wasn’t considered just crazy, but also a witch. Rumors began to spread that she could not only predict the future, but also cause deaths and place curses on people, with many locals complaining that she had hexed them or their land. At the time, the rugged, rural area was very much superstitious, so it got to the point where pretty much every bad thing that happened anywhere in town would invariably be blamed on Mummy’s black magic, causing her to be viewed with a mixture of curiosity, awe, suspicion, fear, and scorn.

In the spring of 1934, Susan and her adopted daughter Tavilla were renting out rooms in their home in order to make some extra income, as well as offering folk cures to the sick and injured, something that Mummey was well-known for despite her spooky reputation as a witch. On March 17, 1934, one of her customers was paying Mummey a visit, a young man by the name of Jacob Rice, who was nursing a badly wounded foot. Mummey got to work seeing to him, letting him stay in one of the rooms while he healed, and on that evening she went to go change his bandages when there was a thunderous boom that roared through the home, followed by another. Rice and Tavilla cowered in the gloom, and when they finally were able to check on Mummey they found that she was slumped over dead, her body pierced by a unique handmade bullet that had gone right through her to lodge itself in the wall. Police were called in and things would take a turn for the truly bizarre.

The fact that Mummey had been so feared and loathed in the area made it easy to imagine that someone would want her dead, indeed there seemed to be an air of relief and even almost a celebratory feel when word of Mummey’s death got out in the open. This made it very hard to zero in on who the killer might be, but they were soon able to get a lead, in the form of some witnesses who told the authorities that this had been the doing of a 24-year-old local man by the name of Albert Shinsky. When Shinsky was confronted about the death of Mummey, he quickly confessed, and as the police questioned him he would weave quite the strange tale, indeed.

Shinsky would claim that one day years before he had been working on a farm that sat right next to Mummey’s property, and that when some of her cows had escaped she blamed the boy and became enraged. Shinsky, who had been just 17 years old at the time, claimed that she had then placed a hex on him, which had caused his life to spiral into a nightmare of all sorts of paranormal phenomena. He claimed that he was often poked, pushed, prodded, and even choked by unseen hands at all hours, that he was stabbed by invisible pins, and that he was frequently harassed by a phantom cat with “burning eyes” that could shapeshift and which would attack him in the night. He became unable to sleep or have any peace at all, until finally he heard the voice of a spirit tell him that the only way to escape was to kill her. He sought help from a local “hex doctor,” who was well-versed in how to fight a witch’s magic and told him how to make a magic bullet, which was the only way to kill the witch. Shinsky would explain of his ordeal and what he had done:

I heard a voice from the sky say 'shoot that woman' and I did. I was hexed. She sent black cats with burning eyes from the skies down at me. Black cats would come into my room and claw at my side. The cat would spit and snarl at me, its eyes glowed red with fire. The cat would grow so large that I was almost smothered in its fur. I had to kill her to break the spell. The hex doctor told me I'd never be right till old Susie was killed by a magic bullet. I've tried ever since to get strength enough to do it and I made the bullet myself. Susie was in cahoots with the devil. I was outside her house fighting those spirits for half an hour. But finally I overcame her spell, then I let her have it. After I fired the shot I felt sore all over. It seemed as if something was leaving my body... I had a hard time walking a mile to where my car was parked but I knew the hex was leaving my body and I was glad. Just before I got into the car I shook all over. Then I felt grand. It was wonderful to feel so grand!

Be that as it may, it was still considered murder in the eyes of the law, but when Shinsky went to trial he had a lot of support from other citizens, as they were just as glad that Mummey was gone as he was, even establishing a defense fund for his legal fees. Mostly people were glad she was dead, and there were even those who would come forward to claim that they too had been hexed by her. His girlfriend, Selina, would also corroborate his claims, insisting that the witchcraft and curse her boyfriend had suffered were very real. However, the court wasn't buying it, and wanted to see Shinsky face the death penalty for what he had done, which was pursued and which was seemingly alright by him. He would tell prosecutors, “I had to kill her. The electric chair will be better than the suffering of the last seven years. I don’t care, I’m at peace.” Indeed, he showed no remorse at all for what he had done, no regrets, and was fully willing to face whatever grave consequences that entailed.

The prosecution really pushed for the death penalty, but in the end Shinsky was determined to be insane and suffering from hallucinations, despite numerous witnesses who insisted that he was not. Shinsky would be sent to the Farview State Hospital for the Criminally Insane, where he stayed until 1976 and was then put on trial again. By the time this second trial happened, Shinsky had softened his stance on the whole witchcraft angle and seemed very remorseful, stating, “I was just an ignorant youth at that time that I shot that poor woman.” The court would determine that he had already been punished enough and after his long 42 years of confinement he walked away finally a free man. His sweet return to normal life would not last long, as his health would deteriorate in the subsequent years and he would die at his home in May of 1983. We are left to wonder just what was going on here. Was this just a disturbed young individual who got caught up in some sort of psychotic break fueled by the superstitious paranoia at the time? Was there ever really a witch of Ringtown Valley or was this an innocent woman who was wrongly targeted? Whatever the case may be, it is a strange little historical oddity, indeed.

Wormholes: The Amazing Side of Time-Travel