Among all of the haunted places of the world, some of the most terrifying are those abandoned, forgotten places with histories of abuse, death, agony, and horror. Such things seem to seep into the very walls of such places to infuse them with some sort of negative energy and paranormal forces, ensuring that they manage to stand out as some of the most intensely haunted places there are. Surely among these must rank the many supposedly haunted prisons of the world, and among these perhaps one of the most haunted of all is a now defunct penitentiary in the U.S. state of Pennsylvania, which has the dark history, bloodshed, and sheer ominous demeanor to make it the perfect setting for terrifying hauntings and all manner of paranormal strangeness.

The Eastern State Penitentiary, which lies just outside of downtown Philadelphia, Pennsylvania, is an imposing, high walled gothic looking structure like something out of a horror movie, with a long and often very dark history befitting its rather ominous appearance. Often considered to be the world’s first true penitentiary, it opened its doors to prisoners on October 25, 1829, and was truly groundbreaking for its time. The prison utilized a unique architectural structure and floorplan of 7 spokes of cell blocks that radiated out from a central core and surveillance tower, with its groundbreaking design being the inspiration and basis of the designs of hundreds of other prisons. The dim cells were also quite advanced for the era, featuring running faucets, central heating, and flushing toilets. The prison was also an innovator of the “separate system,” which most readers would know as solitary confinement, which sought to rehabilitate prisoners by forcing them into isolated, silent reflection upon their crimes and behavior. The idea was for the prison to not just punish, but also help the prisoners seek spiritual change and salvation, and indeed the very word “penitentiary” comes from the word “penitence.” At the time it was a revolutionary idea, and combined with the design of the building itself, it set the model for prisons for years to come.

While they called it “self-reflection,” others might call it “torture,” and solitary confinement was not the only kind to be had at Eastern State Penitentiary. The guards at the prison became renowned for their cruelty and creativity when it came to disciplining prisoners, both physically and psychologically. Even the most minor infractions could incur the wrath of the guards, who would dole out punishments such as throwing a prisoner into freezing cold water, hanging them out naked in frigid weather until frost formed on the skin, chaining them to a chair for days on end, starvation, and using a device called the “iron gag,” in which the prisoner's hands would be chained behind his back and connected to a strap around the tongue. There was also “The Hole,” which was a tight, windowless space of eternal gloom, where a prisoner would be thrown for weeks on end to leave them languishing in a perpetual, absolute darkness with barely anything to eat and just a hole in the floor as a toilet, and only their own thoughts and perhaps some roaches for company. It is no wonder that many prisoners committed suicide, went mad, or attacked and killed each other or the guards, imbuing these walls with much tragedy, anguish, fear, and blood. It was a frightening place to be, and even the very appearance of the prison was a neo-Gothic look designed specifically to inspire fear.

Nevertheless, Eastern State Penitentiary for its time was seen as the gold standard of prisons, and at one time was the largest and most expensive public structure the United states had ever seen. So amazing was it that during the 19th century it was actually a popular tourist destination for curiosity seekers who came to see the cutting edge prison and its miserable charges. Many famous criminals would make their way through these doors, including the notorious mobster Al Capone and the infamous bank robber Willie Sutton, who also happens to be one of the only people to ever successfully escape from the prison, despite the fact that he was recaptured shortly after. The prison would become a National Historic Landmark in 1965, yet after nearly a century and a half of operation, the once innovative prison was considered an old fashioned relic and closed in 1971, going on to become over several decades a feral, crumbling ruin populated by stray cats and weeds until opening to the public as a historic site and museum in 1994. It’s all very interesting but you came here for ghosts and hauntings, didn’t you? Well, Eastern State Penitentiary has those in spades.

Considering its history permeated by pain, insanity, and death, it is easy to understand why this place should be considered haunted. Throughout the course of its operation it is estimated that around 1,200 inmates died here of various causes, more than 50 inmates committed suicide, and over a dozen were murdered by other inmates, and there have been tales of paranormal strangeness going back to its days as an operating prison. One of the most famous reports came from none other than Al Capone himself. Capone was incarcerated here on a weapons charge from 1929 to 1930, housed in a spacious fully furnished cell that was the lap of luxury compared to the other prisoners, but the cell apparently had a rather insidious ghost. Capone complained of being harassed by the ghost of a man named James Clark, who was one of the victims of an infamous Chicago gang battle called the St. Valentine's Day Massacre. The normally fearless Capone claimed that Clark would unsettlingly appear as an apparition and move or throw objects around, which according to one guard reduced the hot shot gangster to “a weeping and terrified mess who would send out bloodcurdling screams at night, shouting for ‘Jimmy’ to ‘leave me alone.’” Was this a real ghost, Capone yanking everyone’s chain, or just the effects of the eerie ambiance of the prison working away on his imagination like a disease? Who knows?

Visitors and staff today have reported a wide variety of paranormal phenomena from here. Disembodied footsteps, screaming, shouting, and clanging on bars when no one else is there, voices whispering in the dark from darkened cells filled with nothing but the debris of decades of neglect, shadow figures, cold spots, orbs, you name it Eastern State Penitentiary has it. Some areas are particularly imbued with dark, supernatural energy, such as the notorious Cellblock 4. This area of the prison is said to be prowled by a very angry, very malignant force that will appear as frightening faces in the walls, as well as poke, push, and even punch people, and create sudden bouts of unbearable dread that causes some people to flee the premises. A famous case of this allegedly happened to a maintenance worker named Gary Johnson, who was doing renovation work in the cellblock in the 1990s when he was paralyzed by a wave of negative energy marked by acute contempt and hate. As he tried to back out of the area he would claim that an unseen hand had grabbed him and dragged him towards one of the cells, where the walls were covered with demonic faces that leered at him. 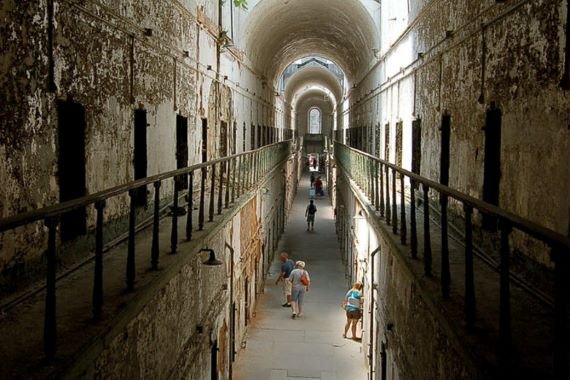 There are other haunted locales in the prison as well. Cellblock 6 is known for its Shadow Person activity, Cellblock 4 for mischievous poltergeist activity, Cellblock 12 for its persistent ghostly laughter and chattering disembodied eerie voices and whispers, and the central guard tower for the apparition of a prison guard in old fashioned uniform staring forlornly out from his perch across the ruins of what once was. There is even a ghostly dog called “Pep,” a black Labrador that was actually once imprisoned here by the mayor for killing cats, mostly as a publicity stunt for the prison and a therapy dog, but who had his own mugshot and prisoner number. Pep apparently spends much of his time lurking about the exercise yard, and although frightening in appearance, is considered to be mostly harmless. The paranormal activity at the prison is so pronounced that according to lore some areas of the prison are closed off to the public, not because their deteriorated condition is dangerous so much as they are so besieged by intense ghostly activity. All of this has made sure that Eastern State Penitentiary has attracted droves of paranormal researchers and has appeared on shows such as the SyFy series Ghost Hunters, the Travel Channel's Ghost Adventures and Most Haunted Live, and MTVs Fear. It also makes the spooky setting perfect for an annual Haunted House Halloween event run as a fundraiser, called “Terror Behind the Walls.” The penitentiary, which exists in a creepy state of “preserved ruin,” is at present open for tours both normal historic tours and ghost tours, so anyone who wants to check it out for themselves is free to do so. However, don't say you weren't warned.

Earth May Have Another Supercontinent in 200 Million Years