Haunted Shakespeare Hotel is Up For Sale

The Shakespeare Hotel in Barcaldine, Queensland, Australia, is currently for sale and it comes with a couple of ghosts. According to the current owner, Heather Hoskin, the building is home to a “cheeky” ghost who likes to move things around, and a more gentle spirit who roams around the halls and lets out audible sighs. Interestingly, Heather claimed that she never believed in ghosts before spending time at the location but now she is a true believer.

First, let’s talk about the “cheeky” ghost that Heather has nicknamed “Bob”. He apparently likes to pull pranks on people, specifically those who stay in room 4. “One young man staying in room 4, his bed ended up halfway out the door one day,” she noted. But apparently Bob has now focused his attention on room 5 and the pub’s manager, Blake Moreland, tries to avoid putting guests in that room. Guests who have stayed in room 5 have asked Blake if anyone had entered their room the previous night because they felt as if someone (or something) touched their shoulder while they slept.

Additionally, Blake has claimed that puddles of scotch have been found on the pub’s floor when he entered in the mornings. “There's a cheeky ghost who's quite thirsty and likes his scotch,” Blake said. “[He] likes a drink in the morning, must be a shift worker.” He apparently also likes to play the slot machines as the security cameras have picked up an apparition sitting at one of them.

As for the second ghost, Heather believes that it is a female who previously owned the building. She explained what would happen as soon as she went upstairs, “Every now and again she (the ghost) would just touch me ever so gently on the back of the neck and sigh.” “She was a very comforting presence.” 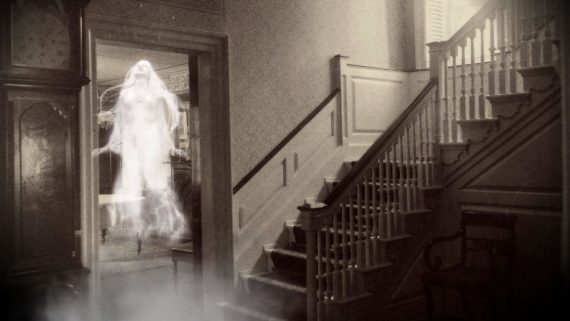 Blake, however, says that the ghost is a male named Charlie who died on the property in the early part of the 1890s. He thinks that it is Charlie who often rings the doorbell even after they removed the batteries. “He's the one who likes to push the doorbell for attention,” he claimed. Whether it is a female previous owner or a male who died there, it is apparently not a scary presence but just a lonely spirit.

If you don’t mind sharing the location with a “cheeky” prankster and a lonely ghost, this may be an ideal building to purchase. Several pictures of the Shakespeare Hotel can be seen here.