Today's article is focused on nothing less than Little Green Men. We've all heard of the term, but do such things really exist? Beyond any shadow of a doubt, at all, one of the most bizarre of all encounters with such strange creatures occurred at Juminda, Estonia, at some point in the late 1930s; the exact date being unclear. According to an investigation undertaken by acclaimed and renowned UFO expert, Jacques Vallee, two witnesses encountered a small – approximately three-feet-tall – humanoid creature with brown-green skin and [italics mine] which had distinct frog-like characteristics. Its eyes were slit-like, as was its mouth. And it appeared to be not at all accustomed to walking on land; its awkward gait made that abundantly clear, and particularly so when it caught sight of the pair and made good its escape. While it outran its pursuers, it did so in a very odd, near-drunken-like state.

A similar state of affairs occurred in the heart of woodland at Orland Park, Illinois, on September 24, 1951. The man who witnessed something both remarkable and disturbing was a steelworker named Harrison Bailey. As he walked through the park, Bailey was suddenly plagued by a burning sensation to his neck, which was accompanied by a sense of cramp in his neck, too. Sensing he was being watched, Bailey quickly swung around. He found himself confronted by a grey-colored object of a large size that was described as being "whirlwind"-like in shape. Things then became decidedly weird: Bailey felt groggy, confused, and almost in a dream-like state. And then nothing. His next memory was vague, but revolved around being surrounded by a large group of eighteen-inch-high humanoids that resembled frogs. They asked bizarre questions, such as where he was from and where he was going. All that Bailey could focus on was the fact that he felt somewhat paralyzed and unable to move properly. The unsettling feeling soon wore off, however, and Bailey was left to make his stumbling, slightly out of it, way back home.

Now, we come to a bit of humor. Now and again (like most Fortean writers, I'm sure), I get some distinctly odd stuff sent to me - including this photo of an alleged green alien, which I received some time around 1994. Frankly, to me, it looks like a badly-created combination of (A) something made for a low-budget sci-fi movie; and (B) Donald Duck. And, below this photo you'll find another, equally weird picture. The thing it shows is, of course, green. What else? 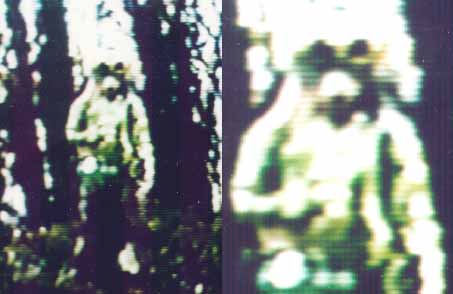 No, don't get too excited, the picture below is not evidence of one of Mac Tonnies' elusive Extraterrestrial-Cryptoterrestrials! Nor does it validate the wild, underground tales of Richard Shaver and the diabolical Deros! It's a photo that was sent to me around 1997 or 1998, and, in reality is just a life-sized model that can be found in a certain, famous series of caves in England, and which is meant to offer a bit of "sword-and-sorcery"-style entertainment to those who visit the caves in question. But what was interesting was the intricately woven yarn that accompanied the picture when it was mailed to me. I forget the precise details now, but it all revolved around the claim that intelligent, sword-wielding, dwarfish man-beasts - originally from another world (aliens, in other words) - were roaming the many and varied caves that exist deep below the British Isles. The letter ran to 2 or 3 pages and was an entertaining piece of hokum written in a definitively atmospheric, Lovecraftian style. But, if you too are ever on the receiving end of this particular photo and its accompanying letter, just enjoy it for what it is: a piece of man-made entertainment, coupled with the written ravings of someone with - apparently - a good imagination, but way too much times on their hands, and nothing else! 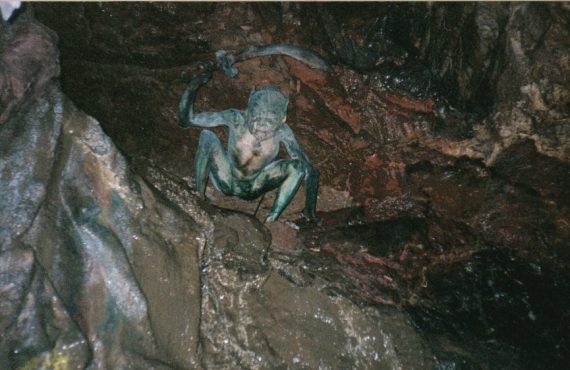