A couple of days ago I wrote an article here at Mysterious Universe on how - in theory, at least - the military personnel involved in the December 1980 "Rendlesham Forest UFO Incident" might still have grounds for a lawsuit. And particularly so because some of the personnel were both physically and psychologically hurt. My reason for thinking that such a suit could be successful is because, as I see it, the 1980 incident was not a UFO event. Rather, it was a government experiment of Top Secret proportions. Certainly, there have been attempts to bring lawsuits to the UFO table before, so to speak. One of the most famous cases - which, interestingly, took place in the very same time-frame as Rendlesham - has become known as the Cash-Landrum case. When, shortly before 9:00 p.m., in the final days of 1980, Vickie Landrum, her grandson, Colby, and Betty Cash exited the restaurant where they had just eaten a fine Texan dinner, they couldn’t imagine what was right around the corner. As they headed towards the town of Huffman, they were terrified by the sudden sight of an unknown object in the sky. Worse, it was descending on a flight-path guaranteed to ensure it landed on the road they were on.

As they got closer, they could see the aerial thing appeared to be in flames and shaped not unlike a diamond. It reached a perilously low level of around twenty-five feet, something which ensured a screeching of brakes and the car brought to a shuddering standstill. The interior temperature of the car suddenly reached intolerable levels. The three jumped out of the vehicle and could only stare in awe and fear. Then, out of the blue, around two dozen, double-rotor helicopters were on the scene, clearly intent on caroling the UFO. Or, perhaps they were escorting it. Cash was sure they were Boeing CH-47 Chinooks. They watched as both the UFO and the helicopters left the area and were finally lost from sight. Within days, all three fell sick: nausea and vomiting were at the forefront. Betty Cash was the one affected most of all – which may be explainable by the fact that she was the one member of the group who got closest to the object. Her hair started to fall out, her skin was covered with pustules and blisters, and the nausea got worse. 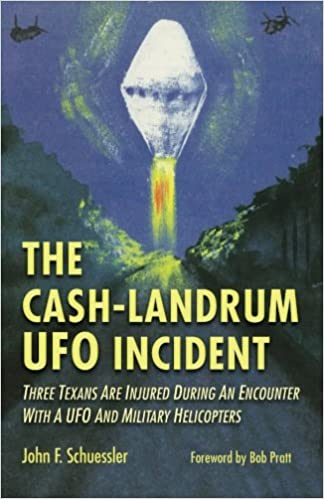 Despite attempts to force the US Government to come clean on what went down, there was nothing but denial after denial from the authorities. The case is a puzzling one, with some UFO researchers believing the three encountered a real UFO, while others suspect they were unfortunate enough to cross paths with a top secret, nuclear-powered, prototype aircraft that was in deep trouble. Now, let's take a look at the matter of the Cash-Landrum affair and the lawsuit that failed to take off. Robbie Graham says: "In December 1980, on a country road near Houston, Texas, three people had a terrifying close encounter with a large, low-flying, diamond-shaped Unidentified Flying Object that was being pursued or escorted by a large fleet of military helicopters. What would become known as the Cash-Landrum incident stands today as one of the most compelling–and also confusing–UFO cases on record; a case that resulted in significant health problems for one of the witnesses and which eventually lead to a $20 million lawsuit against the US government."

The suit failed to achieve anything solid. Over at Unsolved Mysteries, we have the following: "In 1982, Betty and Vickie filed a lawsuit against the U.S. government. However, it was denied by a federal judge for lack of evidence." And, indeed, that's where matters stand to this day. Of course, some might say that given that the Cash-Landrum incident didn't lead to a successful lawsuit, then what chance do the people who were hurt in Rendlesham Forest have? Some might say: "There's no chance." On the other hand, though, if nothing else it's worth a try. It just might provide the victims with significant compensation. It might also reveal the real truth of the Rendlesham incident.

Possible Loch Ness Monster Sighting By a Mother and Daughter