One Tough Mother: I Got Your Monolith Right Here!

The world has gone monolith-crazy in the last few days. This got me thinking. Perhaps it’s time to put away the simple, sheet metal constructions and examine something truly awesome. This is the story of a monolith that was so frightening to its discoverers that it was reburied not once, but twice!

What buried treasure could be this terrifying? It's a ten-foot-tall, basalt monolith of an ancient goddess. In 1790, Spanish conquerors unearthed the five-ton statue of Coatlicue, an ancient Aztec goddess, during the excavation of the major plaza of what is today Mexico City. Carved circa 1500 A.D., the Coatlicue monument depicts the mother of the gods in Aztec cosmology and she has quite a story to tell.

The ornate carvings on the monolith in question represent a middle-aged woman with a skirt fashioned of writhing snakes, a symbol of fertility. Coatlicue has been decapitated. This stone representation captures the moment as blood spurts from her neck and the hissing maw of a giant serpent juts from where her head should be. Coatlicue, in all her bloody glory, stands erect, adorned with a necklace of severed hands and extracted hearts. This cosmic mother is honored for making the ultimate sacrifice, as a casualty of the epic battle between her children.

Before the beginning of time, life was simple for Coatlicue, the caretaker of a shrine atop a sacred mountain. But then, an unexpected pregnancy enraged her other children, the moon and stars. Overcome with jealousy, they planned Coatlicue's demise. The moon goddess and her army of star brothers attacked the defenseless Coatlicue, chopping off her head. But as Coatlicue's severed head fell to the ground, her new son, Huitzilopochtli, the god of war, and patron of the Aztecs, sprung forth. He swiftly dismembered the moon goddess, throwing her head into the air, and hurling his brothers, a legion of star beings, throughout the sky.

Coatlicue dies, but her body fertilizes an Earth on the brink of creation. The sun rises for the first time and Coatlicue's death, dramatizes the sacrificial nature of life: death comes to some, so that others can live. Another son Quetzalcoatl creates humanity, making Coatlicue our grandmother.

A profound story, but, in the eyes of Christian invaders, the towering monolith was a hideous monster and a dangerous pagan idol. News of its discovery quickly attracted followers. Suddenly, indigenous people were placing lit candles and offerings at her clawed feet. To put an end to such alarming developments, Coatlicue was reburied under the patio of the University of Mexico.

In 1803, she was dug up for visiting German scientist Alexander von Humboldt. He made drawings and plaster casts, and then she was promptly reburied. Twenty years later, Coatlicue would finally join the land of the living when British scientist William Bullock brought her to London on exhibit. Today Coatlicue resides in the National Museum of Anthropology in Mexico City, not far from the site of the ancient Aztec capital of Tenochtitlan, where she was first unearthed. 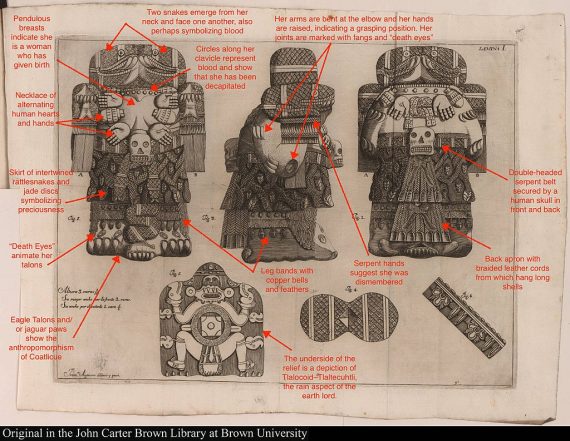 Parapsychologist and renowned Shamanism expert, Stanley Krippner, calls the story of Coatlicue, a myth for our times. To the faithful, her name still had power as recently as the 1960s. Some even claim that Coatlicue lives on in the Santa Muerte cult of modern Mexico. Whatever you believe, I think we can agree that, whether or not alien monoliths exist, the stone monoliths of ancient history, that do exist, can still inspire awe.

Metal Monolith #3 Appears in California – Is It Aliens Yet?