Poltergeists, Demonic Possessions, and a Witch Trial in Ireland

Located on the east coast of County Antrim, in what is now Northern Ireland, is a quaint, rural little seaside town called Islandmagee. It is a quiet, peaceful place dotted with rustic buildings, charming little roads, and historical buildings, and there is very little on the surface that would hint at anything sinister or dark. Yet back in the 18th century this little coastal hamlet would become the center of strange supernatural phenomena, witchcraft, and demonic possession, that would all spiral into the bizarre and end with the last witchcraft trial Ireland would ever see.

It all began in 1710, with a humble local woman by the name of Ann Haltridge. She mostly kept to herself and had never made any problems, but one day she allegedly began to experience very strange and intense paranormal phenomena. She would claim that she was being held under siege by some unseen entity that would throw objects across the room, rip her bedcovers away at night, hurl rocks at her, and bang on the walls, the floor, and ceiling to keep her awake all night long. Most terrifying of all is that she would say that she was often menaced by the spectral apparition of a young boy that she described as “demonic.” This boy would apparently throw rocks at her, claw at her, and once even supposedly dug a hole in the yard that he told her was her grave. The house servants saw the apparition too, and would often chase the boy to have him vanish into thin air and reappear somewhere else. When Haltridge’s son James came to live with her, the paranormal phenomena became even more violent still, and the evil little boy would pronounce that he had been sent by the Devil. Mrs. Haltridge told her friends and neighbors of this supernatural assault, but no one really believed her until one night when she could purportedly be heard screaming that someone was attacking her. Servants and neighbors ran to her aide to find her bent over in pain complaining of stabbing pains in her back and saying she had been attacked by a knife. As there were no actual wounds she was sent back to bed, but the next morning she would be found dead of mysterious means. At the time the incident generated rumors that the death had something to do with the paranormal activity Haltridge had been experiencing, and it would get weirder from there.

Around a year later, Anne Haltridge’s daughter in law, a Mrs. James Haltridge, was visited by her cousin, an 18-year-old woman by the name of Mary Dunbar, who had come to help her run the house and stay with them. Shortly after arriving, Dunbar also claimed to be beset by strange, unexplainable, and often terrifying occurrences, claiming to be pelted by objects flung at her from shelves and struck by unseen hands. She also said that her clothes would constantly be strewn about her room, and that she would find strange arcane symbols scribbled on the floor, bizarre charms of some kind left in her room, and would hear her name whispered from the shadows. In more sinister episodes she claimed that she felt sharp pains all over her body, as if someone were attacking her with a knife, but which did not leave behind any physical injury. Dunbar even described the same demonic little boy stalking her, and added that she also often saw another apparition, this one of a woman she called “Mistress Ann.” This all soon graduated to what seemed to be some sort of demonic possession, with Dunbar at times falling into fits and convulsions, shouting, swearing, snarling and growling like a wild animal, and occasionally vomiting up all manner of strange objects such as feathers, needles, buttons, nails, glass and wool.

In her more lucid moments, Dunbar would describe how she was being tormented in her dreams by a total of eight witches, who came to her in "spectral form" to threaten her, and used their black magic to conjure up the demons attacking her. She claimed that these women had made a deal with the Devil, and told authorities that she remembered the faces of these women and was certain that they lived right there in Islandmagee. They managed to bring in eight women who Dunbar fingered as her tormentors, and the word of this young woman was enough to have them locked away to await trial for being suspected witches. As soon as word got out, the jail was besieged by angry mobs of people who wished to bypass the whole trial and kill the “witches” right then and there, allegedly resulting in one of the accused actually losing an eye.

The women somehow survived this animosity and in 1711 were put on trial and accused with the charges of “harming by magical means” and “bewitching,” although not with the more serious charge of consorting with the Devil, which Dunbar insisted they were doing. The trial itself was a bit of a farce, with the evidence against these women amounting pretty much to Dunbar’s word, the fact that none of the accused were able to recite the entire “Lord’s Prayer,” and some silly business in which a blindfolded Dunbar would go into convulsions of pain when the accused touched her, yet not when someone else did. The accused women were also known for drinking alcohol and smoking tobacco, which is evidence of witchcraft? I guess? This was all seen as enough to convict the accused, and all eight of the “witches” were found guilty. It would be the last witch trial ever held on Irish soil. It is unclear what fate awaited the witches after this, nothing known about what happened to them or to Mary Dunbar after the trial, as the records have been lost to time, possibly destroyed when the Public Records Office was burned down during the Irish Civil War (1922-1923). 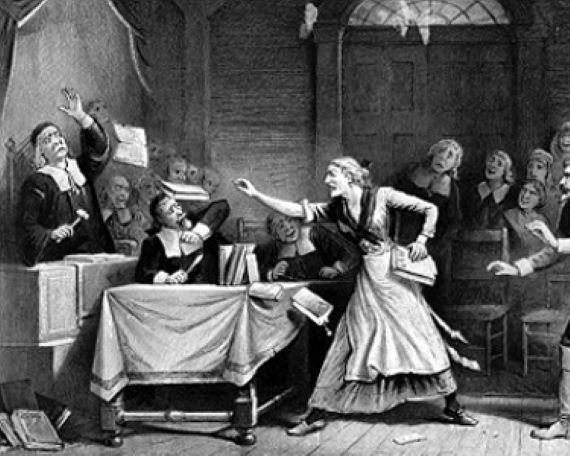 The case of the Islandmagee Witches has been discussed and debated ever since. One of the big questions is what exactly happened to Dunbar and why did she accuse these eight women who she didn’t even know? The main idea is that Mary Dunbar simply made the whole thing up. As to why she would do this, it could have been for attention or fame of some sort. After all, witch trials had always been very rare in Ireland, so this might have been her way of making a name for herself. Andrew Sneddon, author of the book Possessed by the Devil: The Real History of the Islandmagee Witches and Ireland’s Only Mass Witchcraft Trial, has said of what he thinks is the possible reason:

Ironically, she's doing the same kind of things that the witches she's accusing are castigated for, but because it's not her fault, there's no moral responsibility. It's someone else who is doing it to her, so she can break the type of behavioural constraints placed upon her as a female at the time. I think Dunbar was invisible in this community. She had the opportunity because she'd just arrived in this place, and she saw a chance to become visible within this community and this family, and to act in ways that were usually socially unacceptable.

The case still holds some mystery, as the paranormal element remains to some extent, never really explained and leading us to wonder if Dunbar really did experience some poltergeist activity of some sort, and whether it was connected to the witches or not. There is also the fact that Ann Haltridge had also experienced paranormal phenomena in the same house, so what are we to make of this? Did any of this happen at all? If so, what connection did it have to the “witches,” if any? Whatever the case may be, the trial is curious in that the eight convicted women even in modern times have never been acquitted of their supposed crimes, and remain officially guilty of witchcraft, even though even some of the witches of the more famous Salem trials have been retroactively absolved of guilt. Unbelievably, a memorial that was proposed by the author Martina Devlin was rejected because some politicians believed that is was akin to putting up a “shrine to paganism” and was “anti-god,” so it looks as though the witches of Islandmagee will probably remain guilty for some time. In the end, whether the paranormal aspect was ever real or whether these women were witches or not, it remains a bizarre historical oddity that has mostly been lost to the mists of time.

Puerto Rico: An Island Filled With More Monsters Than Just the Chupacabra