In the spirit of the retail business, now that the Christmas season is over, it’s time to start the Easter stories. First up is the discovery of yet another nail purported to be from the cross used in the crucifixion without which there would be no Easter. Is this the Holy Grail of Holy Nails or just another old spike for the massive barrel of alleged ‘true’ nails and the alleged splinters of the ‘true’ cross that glued together would make dozens of them?

“The lid of the box was originally made of a solid gold plate with a wrought inscription IR. The letters can be understood in this context as an abbreviation for Latin for Jesus Rex, or Jesus King.”

The “box” referred to by archaeologist Jiří Šindelář in an interview with The Czech News Agency is a small wooden reliquary (relic container) decorated with gold and silver and hidden in a secret passage behind a wall of the monastery in the town of Milevsko, South Bohemia in the Czech Republic. The Czech Romanesque monastery was founded in 1187 by the Premonstratensian Order and used by them until 1420 when it was taken over by the Hussites. The age of the wood used for part of the box indicates it was made between 1290 and 1394 and was hidden in the secret passage to protect its contents from the Hussites, a Czech Proto-Protestant Christian movement that objected to relics. However, it’s the other wood used for the box that got the archeologist excited.

Inside the box is a chipped part of a nail, 6 cm (2.3 inches) in length, inlaid with a cross made of 21-karat gold. (Photos here.) The inlaid gold cross – along with the age of the wood, the “IR” inscription and the fact that it was hidden with other relics – are the dots Šindelář and officials at the monastery connected to come to the conclusions that this is likely a piece of the ‘true’ cross.

“Because the Hussites destroyed the archive, there was no information that such a thing was here."

With no records, that’s not much proof that this is one of the Holy Nails – the accepted description of the nails of the crucifixion. Most biblical scholars put the number of nails used at three, although historically there’s evidence that some crucifixions of the time used four. Places that claim to have whole or partial ‘Holy Nails’ include the Basilica of Santa Croce in Gerusalemme in Rome, the Hofburg Palace in Vienna, the Cathedral of Monza, the Trier Cathedral and the Bamberg Cathedral in Germany, the Cathedral of Milan, the cathedral treasury of Carpentras in France, the monastery of San Nicolò l'Arena inSicily, the cathedral of Colle di Val d'Elsa in Italy … and that’s a partial list. 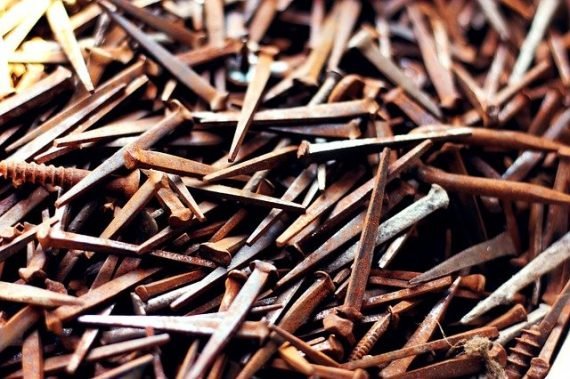 And now we can add the Milevsko monastery – well, once it’s tested next year by “experts.” These tests usually require a piece of the relic witch will be destroyed in the most accurate test processes, so the reluctance to allow this is high, if allowed it's at all. The nail will then be returned to the monastery to be put on display, which is the real non-religious value of these alleged ‘true’ nails.

Fortunes have been spent, wars have been fought and lives have been lost over fragments such as this one. Would the person believed to have seen and felt the 'true' nails firsthand have approved of such behavior? That’s the big dot that never seems to get connected.

The Cheltenham Haunting and the Mysterious Lady in Black