The Bizarre Case of the Alien Robot Attack of Cisco Grove

It started as a hunting trip with a couple of friends. On September 4, 1964, 28-year-old Donald Shrum went on a bow hunting excursion to a place called Cisco Grove, in Placer County, California, along with a group of friends. They had gone out hunting in the area many times before, so there was at first no reason to suspect that this would be any different from any of their other trips, yet there would be a series of events that would play out that would end in one of the most bizarre alien encounters on record.

At some point during the day, Shrum apparently got so caught up in trying to track down deer that he became separated from the rest of the group. As night began to fall and the trees grew dark, he decided that it would be better to just hunker down for the night and catch up with the others at camp in the morning, and so he took up a position up in a tree. As he sat up there listening to the sounds of the night and trying to find elusive sleep, his attention was suddenly drawn to a strange white light in the sky that seemed to be moving in a sort of zig zagging pattern and looked to descend below the tree line. As Shrum watched, it seemed as the object was bobbing along to approach his position, and although he could not hear any noise, he assumed it was a helicopter. 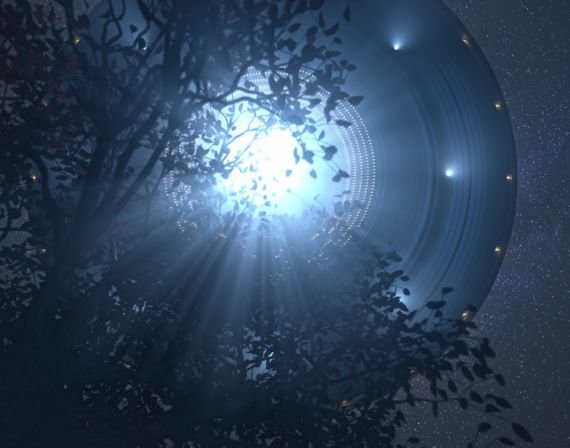 Curiosity got the better of him, and so he dismounted from his safe perch up in the tree to try and go get a closer look. He suspected that it might be a search party out looking for him after he failed to return to camp, and so he launched a flare to let them know where he was, after which the light rapidly came right towards him, coming to within 50 feet and showing itself to be no normal helicopter. In fact, Shrum would describe it as a glowing, cigar-shaped object that was immense, around 14 stories tall. From this object a smaller one detached and supposedly came to rest not far away, which was enough to send Shrum scurrying back up into his tree for safety. He allegedly cowered there in the shadows in hiding for some time until he heard the sound of what sounded like people walking through the brush below, yet when he peeked down, he could see that these were no normal people at all.

Shrum would claim that he saw three entities, two of them humanoids standing about 5 feet tall and wearing silver coveralls and goggles of some sort, while the third was a hulking robotic creature with glowing orange eyes. These entities approached the tree and much to Shrum’s horror the robot began shaking it violently with incredible strength, in an apparent effort to get Shrum out of it. The terrified man hung on for dear life as these otherworldly beings continued their siege of his tree, and at some point during this ordeal he claims that the robotic entity emitted some kind of white vapor from its mouth, which had a strange odor and caused him to black out. He woke up some time later feeling nauseous and lethargic, but still up in his tree. Unfortunately, his aggressors were still there as well, and Shrum threw some lit matches and other items at them in a pathetic attempt to scare them off, before finally remembering his bow and using that to fire on them, hitting the robot three times to send sparks flying, but doing very little actual damage.

In the end, Shrum’s bow and arrow assault did not dissuade the outlandish beings, and indeed a second robot much like the first soon joined them. Once again, the robots released that toxic gas to render him unconscious, and once again he awoke feeling sick, only this time the aliens had gotten bolder and were actually climbing up the tree. Shrum managed to pelt them with various objects he had on him and they climbed back down to circle and shake the tree. This would go on all night, until the coming of dawn, when they apparently sent nearly a dozen of those robotic things at him and caused him to black out once more with a volumous cloud of that smoke. However, this time when he woke he was oddly hanging from a branch by his belt and they were all gone as if they had never been there at all. 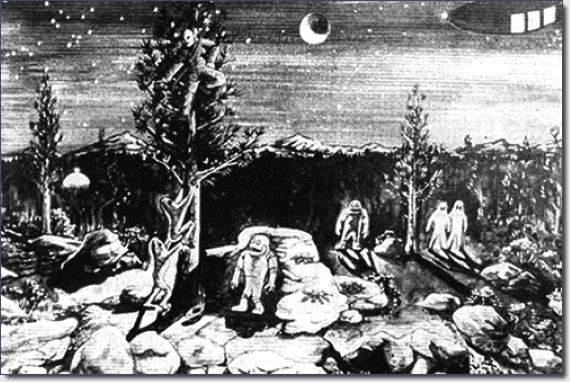 In the light of day Shrum was able to make his way back to camp, where he learned one of his friends had also seen the UFO the previous night. Shrum would come forward with his bizarre tale and even talk to Air Force personnel about it, who were very eager to write it off as either fantasy or someone playing a prank on him. We are left to wonder what it really was he saw, what those creatures were, and perhaps most importantly, why they weren’t able to get him out of that tree despite having vapor spewing robot goons. One interesting point was made by The Iron Skeptic, who says:

Another thing is the way that the aliens are reported to have acted. Think about this for a moment: They could conquer the non-trivial challenge of interstellar travel, but they can’t get a guy out of a tree? That’s ridiculous. That’s like Andre the Giant not being able to open a jar of pickles. One way or another, those pickles are coming out of there. Either these aliens were the absolute stupidest, most bumbling, least competent abductors ever to grace the good green earth, or they had a reason for leaving the terrified man up that tree.

Their actions do, to some extent, appear similar to the actions of the Hopkinsville Goblins or the tiny, wrinkled little men that scared the hell out of some drunkards in Ririe, Idaho in the sixties: the aliens don’t seem to really want anything other than to scare the hell out of some people. The UFO enthusiasts claim that sometimes, aliens just like to screw around with people they abduct, apparently to gauge their reactions. For instance, sometimes they’ll show abductees apocalyptic images of the world being destroyed, just to see how the human will react. Could this just be some evil, alien psychology experiment?

It is an intriguing point to consider, and makes one wonder. How indeed did these forces not manage to get this one guy down from a tree, and was there some mysterious motive for it all?  The case is certainly one of the stranger out there, and has remained amazingly under the radar for the most part. Whatever one may think of such far out reports, a case of a guy hiding in a tree while robot aliens attack him certainly is not something you see every day, and it is a truly outlandish case that will most likely remain confined to the outer fringe.

A Handful of Freaky Cases Concerning Tulpas: The “Thought-Form” Phenomenon